The Real Reason Grads Wear a Cap and Gown

As graduation season kicks off in the United States — for example, on Wednesday, Education Secretary Betsy DeVos will be a commencement speaker at Bethune-Cookman University, and Friday will see commencement appearances by Will Ferrell at the University of Southern California and Sheryl Sandberg at Virginia Tech — many students will don a cap and gown for the rite of passage.

Fewer, it is likely, will know why wearing a robe and an unusual hat is a symbol of having finished school.

The answer can be traced back to the origins of the first European universities, which were founded by clergy in the 12th and 13th centuries. The gowns and hoods (often brown or black in color) worn by students signified their religious status, marking their difference from the laypeople of the town in which they studied. As Columbia University points out in its history of the regalia, that means the origins of “town and gown” divides were quite literal.

“With few exceptions, the medieval scholar had taken minor religious orders, made certain vows,” according to the Massachusetts Institute of Technology (MIT)’s primer on academic garb. The hoods served to keep the scholars’ shaved heads warm. At one point, the hood is said to have been just an alms bag slung around their necks. The gowns were also thought to be necessary to keep graduates warm in unheated buildings.

Nowadays, with many more people pursuing higher education, having to wear a cap, gown and hood can be seen as a drag — especially at a ceremony that’s often outdoors in hot weather. But the uniform was considered a privilege. And caps and gowns weren’t always just associated with graduation. At Columbia in the 19th century — and even when it was known as King’s College in the 18th century — the cap and gown was the uniform. One account reports that a student who stole eight sheets of paper and a pen knife was stripped of his gown and barred from wearing his cap and gown for a week.

An American intercollegiate commission devised the modern-day system of academic regalia, which involves robes that are different lengths depending on the degree and colors that signify various disciplines. 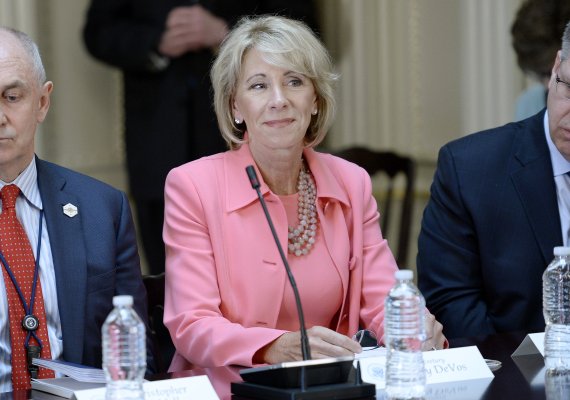 Betsy DeVos to Give Controversial Graduation Speech
Next Up: Editor's Pick