What Does Trump See When He Looks Back In History? Mostly He Sees ... Trump

Jackson is only the most prominent instance of Trump’s selective but illuminating use of history.
Illustration by Getty Images
By Jon Meacham

It was Vintage Ronald Reagan. Addressing a fundraiser for the JFK Library in 1985, the 40th President mused about the mystery and magic of the White House. “Nothing is ever lost in that great house; some music plays on,” Reagan said to an audience that included Jacqueline Kennedy Onassis. “I have been told that late at night when the clouds are still and the moon is high, you can just about hear the sound of certain memories brushing by. You can almost hear, if you listen close, the whir of a wheelchair rolling by and the sound of a voice calling out, ‘And another thing, Eleanor!’ Turn down a hall and you can hear the brisk strut of a fellow saying, ‘Bully! Absolutely ripping!’ Walk softly now and you’re drawn to the soft notes of a piano and a brilliant gathering in the East Room, where a crowd surrounds a bright young President who is full of hope and laughter.”

They can’t help it, really: Presidents live and work in a house of history. They dwell with ghosts. Present power and the weight of the past are ambient realities of daily life in the presidency, and the two are intimately connected. Presidents look back seeking both inspiration for the future and sanction for the moment–and now even Donald Trump, perhaps the least historically minded man ever to reach the pinnacle of power, has fallen under the spell of what (and who) has come before. What’s revealing about a President’s sense of history is less about the history itself than about what that President’s perspective on the history tells us about him.

So what’s the significance of Trump’s newfound Andrew Jackson fascination? That there was, in the President’s view, a Trump before there was the Trump. An unconventional tribune of the people–a “swashbuckler,” in Trump’s phrase–comes riding into Washington, upsetting elites and promising a new democratic age. The press and the established order are aghast but ultimately cowed into submission by the charismatic leader–a man who, despite all the critics and all the naysayers, has a “big heart” and a transformative personality. Presidents tend to see as they wish to be seen, and Trump wasted no time in hanging a Ralph Earl portrait of Jackson in the Oval Office, in paying homage to Jackson at the Hermitage in Nashville on Old Hickory’s 250th birthday and, most recently, in speculating that Jackson would somehow have averted the Civil War because of his devotion to the Union. (Whether Jackson would have renounced his slave-owning ways to defy secessionists was left unexplored and is in any event unknowable, since the seventh President died in 1845.) The intersection of the two thoughts–a fondness for Jackson and a belief, first expressed in TIME last summer, that the war Shelby Foote once called “the cross-roads of our being” could have been resolved by the right dealmaker–is not surprising when we remember that Trump, after all, believes himself just that kind of ultimate dealmaker.

Jackson is only the most prominent instance of Trump’s selective but illuminating use of history. Desperate for the approval of the present and of the future, the 45th President has also occasionally sought the approbation of the past. He has alluded to Henry Clay on the issue of protecting American trade and has felt the need to remind audiences that Abraham Lincoln was, like Trump, a Republican. (“Great President,” Trump remarked of Lincoln. “Most people don’t even know he was a Republican, right? Does anyone know? … We have to build that up a little more. Let’s take an ad.”)

Not long ago he conscripted Thomas Jefferson into a diatribe against the press. “When the media lies to people, I will never, ever let them get away with it,” Trump said. “In fact, Thomas Jefferson said, ‘Nothing can [now] be believed which is seen in a newspaper.’ ‘Truth itself,’ he said, ‘becomes suspicious by being put into that polluted vehicle.'” Fair enough, but Jefferson also said this: “Were it left to me to decide whether we should have a government without newspapers, or newspapers without a government, I should not hesitate a moment to prefer the latter.”

History, like life, is complicated. A sense of proportion is essential, as is an appreciation of nuance. The danger is that President Trump, living in the resonant house of which Reagan spoke, will hear only the notes he wishes to hear. So here’s hoping that the incumbent will take the time to absorb the whole symphony. 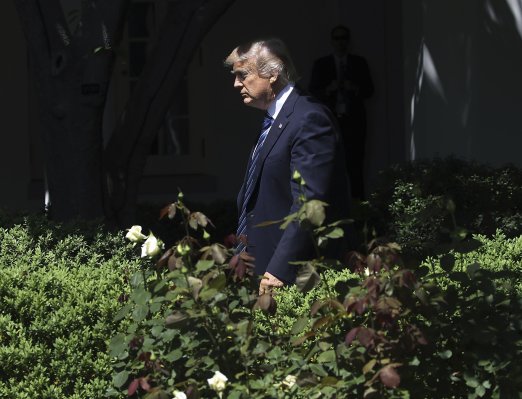 The Budget Battle Shows That Trump Needs to Read the Fine Print
Next Up: Editor's Pick