As his Florida club Mar-a-Lago closes for summer, President Trump is expected to routinely decamp to his high-end golf club in Bedminster, N.J., starting with a trip this weekend.

Trump National Golf Club is one of 17 Trump-branded private courses, but he has a special fondness for Bedminster. Nestled in New Jersey’s lush horse country an hour from New York City, the 13-year-old retreat will likely become a more frequent hub of presidential activity.

Already, Trump’s conducted official business there, and he recently revamped his own villa on the property.

Here are 15 surprising facts about Trump National in Bedminster.

The guy behind the DeLorean from Back to the Future once owned it.

The luxe club used to be the estate of the late car manufacturer who made the DeLorean, the souped-up winged-door sports ride from the sci-fi adventure comedy. John DeLorean called the stately red brick house his home and used the current golf club as his garage.

Before that, the Cowperthwaite family owned the Somerset Hills Hunt Country property, and it was called the Lamington House.

Christopher Lloyd & Michael J. Fox in Back to the Future (1985)
courtesy Universal Studios—moviestillsdb.com

John DeLorean bought the 433 acres for $3.5 million in 1981, Turpin Realtors CEO John D. Turpin said. It then went up for foreclosure in 2000, and was sold at a bankruptcy auction to a developer. Trump’s organization bought it for about $35 million in 2002. Trump was the organization’s managing member, according to a sales agreement the county clerk’s office provided to TIME.

He began plans to turn it into a “world class” course and it opened on Fourth of July weekend in 2004.

Golf magazine repeatedly named it one of the country’s top 100 courses of the year including 2016. It also picked up kudos when it won the Metropolitan Golf Association’s first-ever environment award in 2007, but was later cited for a number of violations in 2011.

Trump’s not the only big deal to set up shop in town.

As a child, Turpin often played in the house that’s now the President’s likely new getaway. (His aunt and her husband, Betsy Dillon and Jock Cowperthwaite, lived there.) He says that Trump’s far from the first famous property owner.

“Having a president in town is somewhat in keeping with our heritage,” he told TIME. Jacqueline Kennedy Onassis and Malcolm Forbes were among the notable residents.

He added that without Trump’s golf attraction, the town wouldn’t be much of a destination, and he views the visits as a boost for the area’s property value.

Want to hit the links? You might need to spend your life savings.

The site frames the membership fees as “an investment in life, leisure, and luxury,” and TheRealDeal estimates that the initiation fee is $350,000, though the club didn’t respond to a request for the cost.

Mar-a-Lago’s initiation price tag? It doubled to $200,000 in January after Trump won the election, the club’s manager told Bloomberg. Trump listed Bedminster’s location—as well as Mar-A-Lago—as one of his assets worth “over $50 million” in his financial disclosure form filed with the Federal Election Commission when he was a 2016 presidential nominee.

There’s a helipad and other perks.

Members can access the on-site 25-meter heated pool, which comes with two “oversized” hot tubs, poolside dining service, eight tennis courts, a gym, a basketball court, a conference center, and a helipad, according to the club’s website.

Bedminister members score access to any of 15 Trump-branded courses across the world from Scotland’s Turnberry to Florida’s Mar-a-Lago Club, listed on the website as of Thursday.

It has attracted well-known members.

According to Golf, Rudy Giuliani, Yankees manager Joe Torre and former President Bill Clinton have been among the reported members.

After several visits to Mar-a-Lago, which he’s attempted to rebrand as the “Winter White House,” it’s clear that Maryland’s Camp David isn’t his speed. “Very rustic, it’s nice, you’d like it. You know how long you’d like it? For about 30 minutes,” he told a European journalist, according to the Washington Post.

In November 2016, the then-President-elect hosted longtime members at a reception when he was busy meeting potential candidates to fill his Cabinet there. “I could go anywhere…this is where I prepared for the debate. This is where we had great victories,” he told the crowd in leaked audio that Politico obtained. “This is my real group. … You are the special people.”

Ivanka married the publishing and real estate magnate on Oct. 25, 2009, at a lavish wedding for 500 guests. The New York Times reported that the club was her something “borrowed.” The then-private citizen told Brides that she planned to channel Grace Kelly in a custom Vera Wang gown and $265,000 worth of jewelry from her own collection. Her invitations were Tiffany & Co. and well-known cake designer Sylvia Weinstock did the 70-inch tall flower-ringed cake.

The wedding and event designer Preston Bailey said Ivanka made his job easy. “She’s a lady that is very clear in her direction.” Bailey also designed the Mar-A-Lago weddings for Melania and Donald Trump and Eric Trump and Lara Yunaska. He said the whole family has a consistently traditional “gold and white with French influence” style, and that Trump was hands on for every one, including his own.

“He looked at all the details, I remember him making sure the chandeliers and gold leaf were done properly,” Bailey said adding that he didn’t ask for freebies. “He didn’t bargain a lot. He was not nickel and dime-ing.”

The Trump family owns some of the club’s luxury cottages.

Members can opt to spend the night in one of the five swanky cottages or eleven one-room suites.

Ivanka Trump and Jared Kushner won an application to expand their cottage by 2,200 square feet in 2015. This March, the town land use board also gave the President approval for a 500-square-foot, two-story balcony and porch add-on to his private villa.

Trump enjoys it so much that he wanted to spend eternity there at one point.

A representative of his organization in 2013 said he wished the club would be his final resting place, telling local officials that he “appreciates the Bedminster ethic.” But after the club finally won the approval to construct a Trump family cemetery in 2015, the Trump Organization told the city’s land use board that he may go for Florida instead.

His presidential visits have an effect on the local landscape.

Bedminster recently urged the federal government to cover the cost of protecting the President when he’s at the facility. With only 16 officers on the police force, the Township pays for overtime to guard the club on top of the Secret Service. Mayor Steve Parker estimated that seven 72-hour trips could balloon to the cost of $302,000. But Trump’s visits are also good publicity for local businesses like Bedminster Pizza, where Secret Service agents like to eat. “They come every time when Trump is here,” a cook, Enzo Grande, told TIME. “They get chicken parmigiana and pizza. That’s what they love.”

It’s the home of the 2017 U.S. Women’s Open in July and the 2022 PGA Championship, which caused an outcry from several of Trump’s detractors.

Recently the women’s rights group UltraViolet staged a protest at Bedminster, calling for the Open to be moved from the facility, and 109,873 people signed the group’s petition.

The USGA is sticking with the location, and responded with a statement about its commitment to “ensuring our championships are conducted without discrimination.”

“The fact that they haven’t moved it sends a terrible message to women and young golfers after millions of people expressed outrage about the way Donald Trump treats women,” UltraViolet co-founder Shaunna Thomas told TIME, adding that they’re focusing on urging the USGA to cut off from the President’s brand in the future. “It doesn’t have to be over for them. They can still pledge to recover.”

But some golf pros say they’re thrilled to see it take place there.

Trump found support in some golfers like LPGA champion Christine Kerr, an honorary Trump club member who said, “I’m a woman. I’m all for women’s empowerment and everything. Donald’s done tons for the women’s game.”

Most people in the bucolic town voted for him.

Michelle Molloy, who edited this photo essay, is a senior international photo editor at TIME. 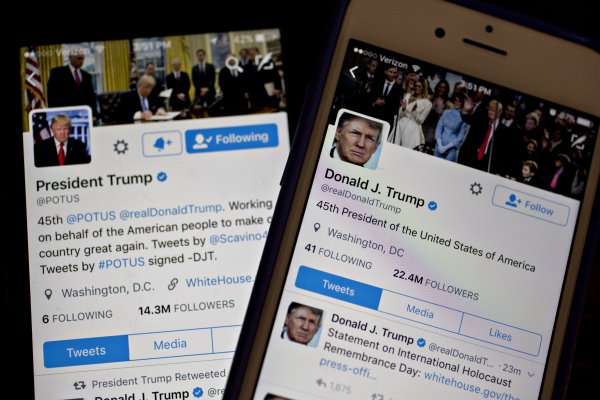