Admit it: You have more important things to do than watch a baby giraffe being born or a baby hippo playing with a lawn sprinkler. So do most people. But that didn’t matter on April 15, when a mama giraffe gave birth at Animal Adventure Park in upstate New York and the park live-streamed the event. There were 232 million views, amounting to a collective 7.6 billion minutes watching, according to the Associated Press. That didn’t stop other Internet mobs from similarly swooning over Winnie the baby Hippo at the Memphis Zoo, with tens of millions of views and shares on Facebook pages around the world, including millions so far tuning in on TIME’s .

And while seeing the babies on screen would be one thing, if you were ever in the room with them, well, your rational faculties would desert you entirely and you would be overcome by the sudden urge to get all squeezy and huggy and tickly with them, probably making all manner of cooing noises and ridiculous faces, and frankly you wouldn’t care who knew it.

So what gives? Why is it that all things baby turn us into such hopeless piles of happy goo?

Much of the phenomenon comes down to what’s known as neoteny — or the suite of physical features we associate with babyhood. Across the animal kingdom — and especially the mammalian parishes of that kingdom — neotenous features are the same: big eyes; high, rounded foreheads; small chins; pug noses; short, plump limbs; and a generous padding of all-over fat. In mammals, body fur is softer and fluffier in babies than it is in adults; in birds, bristly feathers are instead down.

Pets are expensive: Check out PetHero to start saving 25% on your vet bills!

And none of that weapons-grade adorableness includes what happens the moment the baby critters begin to move — the foal wobbling on untried legs, the kitten leaping at a toy and missing, the puppy doing a face plant in its water dish as it runs to the kitchen for dinner.

The fact that all of those visual cues trigger a deep need to cuddle and nurture and protect the babies is an enormously adaptive thing, because cuddling and nurturing and protecting is precisely what helpless infants require if they’re going to survive, so we get evolutionarily enlisted in the effort. The impulse feels so unaccountably good because if it didn’t, we wouldn’t bother, and puppies or kittens or baby hippos — to say nothing of baby humans — who were lost in the wild would be ignored or, much worse, eaten.

Actually, plenty of baby animals do get eaten, but the predation is usually across species — the lion gobbling the fawn, the coyote killing the lamb. That doesn’t mean adult animals don’t have have to overcome a similar impulse to eat their own young, and those adult animals include us. Anthropologist Sarah Blaffer Hrdy of the University of California, Davis, has enumerated the characteristics that make babies so culinarily appealing: they are helpless, calorie-dense (all that fat again), and both their clear skin (if they’re hairless) and extreme youth make them likely to be parasite-free. They are also extremely portable. It takes a whole pride of lions to bag an adult zebra for dinner. A baby is take-out.

If you doubt that that dark side to us exists, consider that, as Hrdy also points out, some of our most common terms of endearment for babies are food-related: cupcake, muffin, cookie, honey-bun. Remember that the next time you coo Ooo, I could just eat you up. But cute trumps food, protecting trumps eating and babies of all species generally dodge the dinner plate long enough to grow up.

Neoteny is not a feature exhibited by babies alone and we tumble for it wherever we see it. Pandas are the lord high priests of cute—even when they’re adults—but give them a long snout, pointed ears and a lean physique and take away the black mask that makes their otherwise beady eyes look much bigger than they are, and they would be just another bearish beast. Mickey Mouse famously got a lot less mouse-like with each early version Walt Disney drew of him, as his adult, rodent features softened and rounded out to those of a juvenile human. Even cartoon humans get the baby treatment. Those gigantic eyes and tiny chins on Frozen‘s Anna and Elsa — or all the Disney princesses for that matter — are no accident.

None of this is likely to change. Our love of cute was millions of years in the making and it’s not going anywhere soon. Indeed, these days we need it more than ever. In an age of partisan acrimony, red-faced pundits and the risk of a global war sparked by a 5:00 AM Tweet, you will pry the panda-cam from my cold, dead hands. 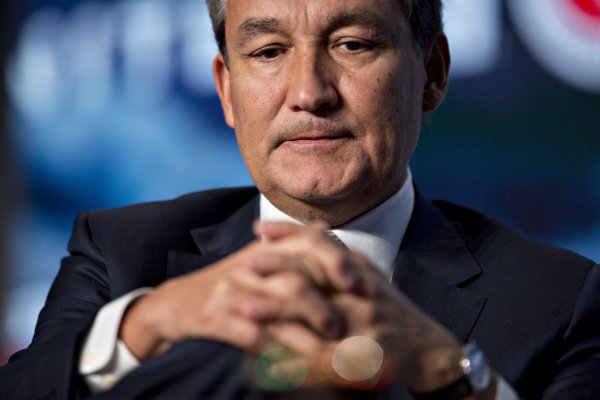 Sean Spicer, Oscar Munoz and How to Bungle a Public Apology
Next Up: Editor's Pick