The Story Behind an Army Combat Photographer's Final Picture

It’s an instance of war that we’re not really meant to see, an unnerving blur of debris and fire before death. Nearly four years after a U.S. Army combat photographer was killed during a training exercise with Afghan forces, the military has released what is her final image taken in the moments before she died.

Spc. Hilda I. Clayton, a “visual information specialist” and a member of the 55th Signal Company, or Combat Camera, was photographing an Afghan National Army “mortar validation exercise” in the eastern Laghman Province on July 2, 2013, when a mortar tube accidentally exploded. Clayton, 22, of Augusta, Ga., was killed alongside an Afghan photographer she was training and several ANA soldiers. Her image was published with the Afghan photographer’s picture in the May-June issue of Military Review, a journal of the army.

“At the critical juncture of the war, when it was necessary for the ANA to increasingly assume responsibility for military actions, the story was not in the fighting but in the partnership that was necessary between U.S. and Afghan forces to stabilize the Afghan nation. One of the Afghan soldiers killed was a photojournalist that Clayton had partnered with to train in photojournalism,” the journal article states. “Not only did Clayton help document activities aimed at shaping and strengthening the partnership but she also shared in the risk by participating in the effort.”

The article adds that Clayton’s death “symbolizes how female soldiers are increasingly exposed to hazardous situations in training and in combat on par with their male counterparts.”

Bill Darley, managing editor of Military Review, said in a phone call on Tuesday that the photos had been brought to the publication’s attention by a staff member who had served with Clayton. He said it felt a proper homage to Clayton and a fitting end for an edition that in part focused on gender equality.

Of the response to Clayton’s photo, which has been shared widely, Darley said she “was revered by her unit—they even named an annual contest in her honor—and she was a dedicated soldier, so we are gratified” that the public is interested in her story.

As difficult it is to imagine that a photographer continued to shoot in their final moments, there is precedent. In the first hours of the Six-Day War in 1967, LIFE photographer Paul Schutzer was embedded in an armed convoy heading across the Negev Desert to Gaza when he was shot in the head. Schutzer’s camera was found near his remains; on the roll of 35-mm film was about two-dozen frames. In a special edition, LIFE honored his career and printed his final pictures.

Similarly, in the days after her death, Clayton’s spirit in the field was recalled. “She was always willing to take on any mission,” said Col. Bill Benson, the Augusta Chronicle reported, “and she pursued every opportunity to tell our story with her images. This week, in the hours after the image was released, a few new visitors signed an online guest book honoring her legacy. “I never knew you, but I just read about you in the news,” wrote Robert B. from Chico, Calif. “I am proud of you.” 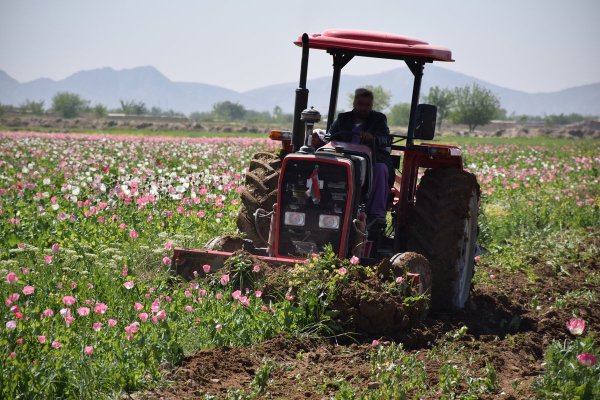 Can You Spot What's Wrong With This USAID Photo of an Afghan Pomegranate Farmer?
Next Up: Editor's Pick