This New Laptop Is Microsoft's Shot at Apple and Google

Microsoft on Tuesday added a new computer to its Surface lineup: the Surface Laptop, which the company is targeting primarily at college students. It will start at $999 and starts shipping June 15.

The Surface Laptop is more like a MacBook-style notebook than Microsoft’s Surface Book. It doesn’t have a detachable screen, nor is its hinge meant to be seen. It will be available in four colors: burgundy, gold, platinum, and blue, and it weighs 2.7 pounds. That’s heavier than Apple’s 12-inch MacBook, but lighter than the MacBook Air.

Microsoft’s Surface Laptop will include a 13.5-inch screen with a 3 x 2 aspect ratio, like Samsung’s Chromebook Pro and Plus, which the company says should make the screen feel like using a 14-inch device.

Buyers will be able to choose between Intel Core i5 and i7 configurations, and Microsoft is claiming 14.5 hours of battery life. Apple, by comparison, claims that its MacBook Air can last for 12 hours. Recently released Microsoft accessories like the Surface Dial and Surface Pen will also work with the new PC.

Once a student or teacher downloads a program from the Windows Store, the system verifies it for security and performance. A major goal with Windows 10 S is to ensure that Windows 10 S devices won’t slow down over time, says Terry Myerson, Microsoft’s executive vice president of the Windows and devices group. Performance should be the same on “day one as day 1,000,” he said.

Microsoft’s partners will also release devices that run on Windows 10 S, the cheapest of which will start at $189. The move could threaten Google’s dominance in the education market, where Chromebooks accounted for 58% of device shipments to primary and secondary schools in the U.S. last year, according to research firm Futuresource Consulting. Windows computers, meanwhile, only made up 22%, while iOS accounted for 14%.

With its Surface Laptop, Microsoft appears to be offering a device that blends the appeal of a Chromebook and a MacBook Air. It’s portable and premium like Apple’s laptops, but is aimed at school and ease-of-use, like computers that run on Google’s Chrome OS. “How can technology create more opportunity not for a few, but for all?,” asked Microsoft CEO Satya Nadella during Tuesday’s event. “Addressing that question is core to our mission to power every person and organization on the planet to achieve more.” 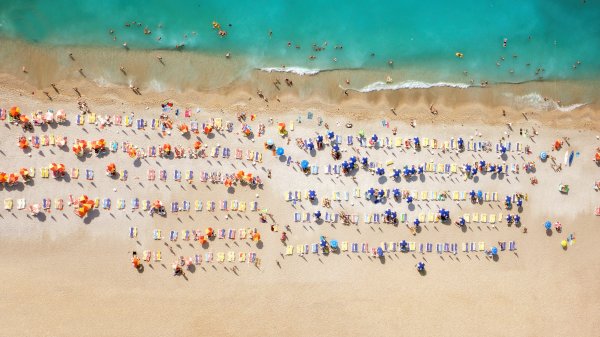 5 Waterproof Speakers You'll Want For Your Next Beach Trip
Next Up: Editor's Pick