Jimmy Kimmel and his wife Molly McNearney welcomed their second child together, William “Billy” Kimmel on Apr. 21. But at three days old, Billy had to have open heart surgery at Children’s Hospital Los Angeles.

“We call him Billy, six pushes he was out, he appeared a normal healthy baby,” Kimmel, 49, began his opening monologue while fighting back tears.

The new parents were moved to the recovery room, where the couple’s eldest child, 2-year-old Jane, was there to meet her baby brother, who was named after Kimmel’s longtime TV partner Guillermo. (Guillermo is the Spanish form of the name William).

But three hours later, a nurse noticed something was wrong with Billy.

“My wife was in bed relaxing, a very attentive nurse at Cedars-Sinai heard a murmur in his heart and noticed he was a bit purple, which is not common,” Kimmel explained. “[Nurses] determined he wasn’t getting enough oxygen in his blood, either in his heart or lungs … It’s a terrifying thing, you know my wife is back in the recovery room, she has no idea what’s going on.”

Billy’s heart surgeon explained to Kimmel and McNearney that their son was born with a congenital heart disease and that there was a “hole in the wall of the left and right side of his heart.”

On Monday morning, Billy successfully underwent open heart surgery. “He’ll have to have another surgery in 3-6 months,” Kimmel shared, adding that Billy will need a third “non-evasive surgery when he’s older.”

“Poor kid, not only did he get a bad heart, he got my face,” Kimmel lightheartedly joked.

Six days after he was born, Billy was able to leave the L.A. hospital and go home.

Kimmel was sure to thank his friends and family and, shockingly, even Matt Damon: “Every one of my friends was there 100%. We had atheists praying for us, okay? We had people who do not believe in God praying to him. And I hate to even say, but even that son-of-a-bitch Matt Damon sent flowers.”

But he saved his kindest words for his wife Molly.

“Most of all, I want to thank my wife Molly. First of all, for allowing me to have sex with her in the first place.,” he joked. “But also for being so strong and level-headed and positive and loving during the worst nightmare a new mother could experience. I couldn’t as for a better partner and I’m so happy we had this baby together. I’m definitely getting a vasectomy after this.”

The couple announced they were expecting their second child together in early December 2016.

And despite having initial jitters about being the father of a little kid again, said, “It does add a little bit of joy to each day. Maybe more than a little bit.”

Kimmel is now on paternity leave for the rest of this week and his famous friends will guest host the ABC show in his absence. Here’s the lineup: 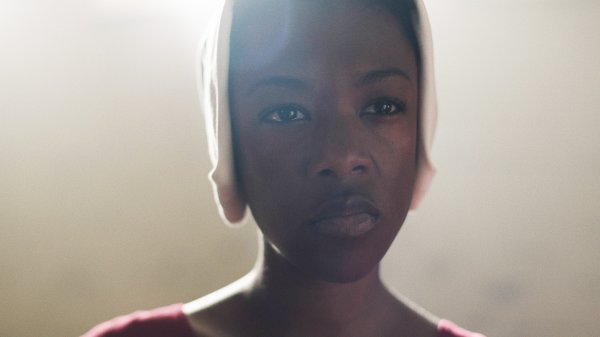 The Differences Between The Handmaid's Tale Show and Book
Next Up: Editor's Pick