Just a few miles from ExxonMobil’s global headquarters outside of Dallas, men in cowboy boots and women toting designer handbags crammed into a small room in the middle of a crowded convention space at the local fairground. As families and school groups roamed outside to celebrate Earth Day Texas, the well-heeled visitors commiserated about the threat of climate change and President Trump’s cuts to the Environmental Protection Agency.

That might seem surprising given the attendees in the room. Rod Richardson’s father, R. Randolph Richardson, may be best known for his lavish support of free-market think tanks. Andy Sabin owns a metal recovery and refining company and backed Trump’s presidential bid. Peter Bryn was an engineer for ExxonMobil before heading up conservative outreach for the Citizens’ Climate Lobby.

Yet the Dallas gathering is one of a number of such groups that are pushing back on the narrative that the GOP is anti-environment. “Being a Republican, being an environmentalist encompasses a lot,” says Sabin. “It’s about doing the right thing while we’re on the planet.”

Trump’s election has made their task harder. Several prominent senior members of the new administration and a significant number of Republican members of Congress reject the science of climate change, despite a well-developed international scientific consensus. But the focus on climate change deniers tends to obscure the substantive and scientifically informed conversations taking place in some Republican circles. Indeed, a growing number of Republicans, 40% at last count, say they are concerned about climate change, according to a March Gallup poll. Many GOP leaders outside of Washington––local elected officials, party elders, donors––have begun a discussion about conservative solutions to climate change, which requires acknowledging that climate change is real and humans are causing it.

Climate change was not a partisan issue when it first emerged into the public sphere. President George H.W. Bush staked a strong position on the issue early on in his presidency, pushing for the creation of a dedicated United Nations body, and Vice President Al Gore led the Clinton administration’s initiative. The cleavage began under President George W. Bush, whose administration challenged climate science, and intensified under the Obama administration and its aggressive environmental agenda. But with the evidence of man-made climate stronger than ever, some Republicans are pushing back against their party.

In Dallas, a carbon tax was on the agenda. Richardson floated his idea of what he has termed “clean energy tax cuts” that reward businesses for switching to renewable energy sources. That’s exactly the discussion real estate developer Trammel S. Crow wanted when he launched Earth Day Texas as a place where conservatives could speak up on climate change—and enter a dialogue with counterparts on the left. “It’s not a question of ‘will the Republican Party come around?,” he says. “The Green Republicans woke up. This election really woke them up.”

In Washington, a small but growing number of elected officials have also come around. Seventeen Republicans introduced a resolution in the House of Representatives in March acknowledging the science of man-made global warming and calling for action. Many of those Republicans have joined with Democrats in the Climate Solutions Caucus to discuss climate change and identify common ground. With gridlock on Capitol Hill, many of their efforts will likely center on small-scale solutions like helping modernize the electric grid for renewable energy sources. Even those incremental steps help change the perception that climate change is a one party issue. “We want the caucus to act as an ideas factory for climate change solutions,” says Rep. Carlos Curbelo, a Florida Republican who co-chairs the Climate Solutions Caucus. “We will be modest at first but I think you’ll see more and more ideas.”

More ambitious is a proposal from a group of GOP elder statesmen, including former Secretary of State George Shultz and former Treasury Secretary Henry Paulson, for a revenue-neutral carbon tax where the money is passed back to taxpayers in exchange for repeal of Obama-era climate regulations. The measure has thus far been a non-starter, despite repeated rumors that it has been under consideration by the Trump administration. “The simplistic view is that Democrats want to solve climate change and Republicans don’t,” said Ted Halstead, CEO of the Climate Leadership Council, which proposed the measure, in February. “That is not true.”

To be sure, environmental and progressive groups rapidly dismiss many of the solutions to climate change heralded by conservatives. But the debate is a good thing. And it begins with acknowledging climate change is real. 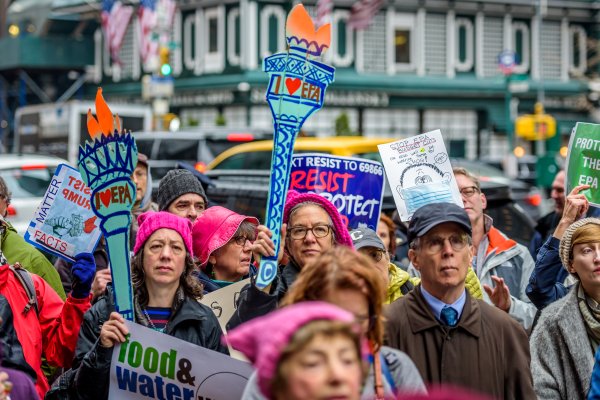 Spoof Travel Posters Show What U.S. Climate Change Could Look Like
Next Up: Editor's Pick