A new propaganda video from North Korea simulates an attack on the White House, showing the presidential residence in crosshairs.

The video clip, released Thursday, shows the White House as a target, followed by an aircraft carrier exploding into flames.

According to the Washington Post, the caption accompanying that image translates in English to read, “When the enemy takes the first step toward provocation and invasion.”

Aircraft carriers, navy vessels and footage of men rushing out of tanks and onto shore from the sea are also included in the video.

Although North Korea has released propaganda videos before, this one comes amidst rising tensions between the reclusive country and the United States. As North Korea continues to develop its nuclear weapons and conduct missile tests, the United States has ordered the USS Carl Vinson aircraft carrier to the waters off the Korean Peninsula, and conducted its own nuclear-capable intercontinental ballistic missile test.

On Wednesday, the Trump administration summoned the entire Senate for a briefing on this issue.

“What you’ve seen is really an integrated effort to prioritize diplomatic and informational aspects of national power, but also what you’ll see soon is using the economic dimension of national power as well as the military preparations that are underway,” a White House official told reporters as the Senate was being briefed. 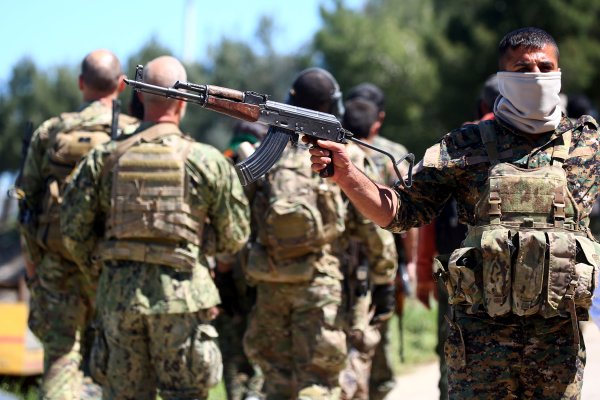 Turkey on a 'Collision Course' With the U.S.
Next Up: Editor's Pick