In fact, among leaders of the so-called “resistance” movement, there is widespread disagreement about what exactly was their biggest triumph. Some cite the enthusiasm for protests on inauguration weekend. Others think it was their rapid response to the two travel bans. And still others highlight the legislative failure of the bill to repeal the Affordable Care Act.

For the opposition groups, Trump’s first 100 days have been marked with a string of unexpected victories, such as Trump’s legal setbacks, and a few defeats, such as the confirmation of Supreme Court Justice Neil Gorsuch, which they anticipated. Overall, they say they’re doing better than they had hoped while avoiding what they feared.

Protesters rally during a demonstration against the Muslim immigration ban at JFK International Airport on Jan. 28, 2017, in New York City
Stephanie Keith—Getty Images

“There were three threats,” says activist and pundit Van Jones. “First was that psychologically, people would just adapt themselves to Trump. Second was that the courts would prove to be an ineffective barrier. Third was that with Republicans in control of the House and Senate, there would be no way to stop him legislatively.” So far, he said the opposition has avoided all three.

The anti-Trump forces have also coalesced quickly. Groups that didn’t exist six months ago have now become the center of a left-wing activist machine. The Women’s March, which started as a Facebook group and drew roughly 4 million people the day after Trump’s election, now controls a network of 480 local organizers in all 50 states, tapping into more than 5,600 small groups of activists called “huddles.” Indivisible, which started as an online Google doc put together by former congressional staffers, now has two groups in each Congressional district. Organizers say those Indivisible groups mobilized roughly 400,000 people to participate in at least 600 town halls to pressure their representatives on everything from immigration to Obamacare repeal.

And three months after the record-breaking Women’s March, there is so much anti-Trump energy that organizers can’t find enough weekends to schedule protests. In April, nationwide protests were scheduled on three consecutive weekends (the Tax March, the March for Science and the People’s Climate March.) There are so many people marching that some are even buying T-shirts with the slogan “protesting is the new brunch.”

The movement has even activated reticent liberals in deep-red states. “When I first moved to this area, I thought ‘Oh, am I the only person who thinks the way I think?'” says Kathleen Peterson, 71, a retired health worker who helped organize the local Women’s March in Cheyenne, Wyo. “Because of our marches and our group, people are feeling ‘Oh, there are other people who feel the way I do.'” She says she expected double-digit turnout for a Tax March she organized in deep-red Cheyenne, but nearly 200 people showed up to demand Trump’s tax returns and they were met by supportive honks from passing truck drivers.

But organizers say they are most encouraged by the legal and legislative victories that have stymied two of Trump’s most ambitious goals: immigration restrictions and health care reform. After thousands of protesters flooded the nation’s airports to protest Trump’s travel bans, ACLU lawyers challenged his two executive orders on immigration and won. Trump repeatedly promised to repeal Obamacare, but Congressional efforts to repeal and replace the law have been thwarted in part by moderate Republicans who were confronted at town halls by furious constituents.

Activists argue that kind of momentum feeds on itself. “If we hadn’t had these legal victories, or the Women’s March, or our win against Trumpcare, I think a lot of people would be suffering more severe fatigue,” says Indivisible co-founder Sarah Dohl. “Those wins show people that what they’re doing matters.”

As Trump approached his 100th day in office, he criticized it as an unreasonable standard, with some justification. But those three months have been an indication for how things may play out, for the president as well as his opponents. Activists are proud of the apparatus they’ve built, but the decentralized authority and the anger powering it could become liabilities down the road.

For one thing, the left does not have a deep bench of high-profile candidates for the House and Senate in 2018, much less an obvious frontrunner to challenge Trump in 2020. Though organizers like to repeat that the movement is “leaderful, not leaderless,” that could lead to infighting when it comes time to decide who to rally behind. Meantime, the anti-Trump fervor among many activists can be off-putting when it comes time to welcome his erstwhile supporters.

“They’ve framed these arguments in a way that makes it harder for Trump voters to cross the street,” warns Jones. “It’s not about whether Trump is a bad president, it’s about whether you were a bad person to support him.”

And the movement is still hobbled by deep divisions between far-left supporters of Vermont Sen. Bernie Sanders and the more moderate Hillary Clinton supporters, a mutual mistrust that will be difficult to mend. “We have to take self-righteous politics, moral purity, and put it to the side, because there are people in our communities who are actively in danger,” says Linda Sarsour, a co-chair of the Women’s March and a vocal Sanders supporter. “The progressive left has no choice but to organize with people they may not have organized with, for the main purpose of protecting the most marginalized.”

Even if they can get over their internal divisions, the Trump White House may become more difficult to thwart. Some of the biggest wins for the resistance movement have come from unforced errors made by an inexperienced new Administration, like mistakes in the travel ban that made it easier to challenge in court. “Can we count on them to continue to be as incompetent as they are?” asks Faiz Shakir, political director of the ACLU. “I’m not sure that we can.”

Still, all are in agreement that even if the Trump resistance was born as a protest movement, it must quickly mature into an electoral machine. To that end, the Women’s March has recently registered as a political advocacy organization with 501(c)(4) status, while maintaining a nonprofit, nonpartisan entity. They are cultivating their network of millions of emails, grooming local organizers, and strengthening their network of “huddles,” many in conservative areas. “If there’s any time for the resistance to get on the same page, it has to be on electoral politics,” says Sarsour. She says the Women’s March plans to launch massive voter registration and engagement efforts, but that the DNC has not yet asked them for help.

Regardless of the challenges, the anti-Trump organizers insist they have an infinite supply of motivation. “A comedian came to town and said, ‘There’s no way these women can stay mad for four years,'” says Kathleen Peterson. “I said ‘You just watch us. Women can stay mad forever.'” 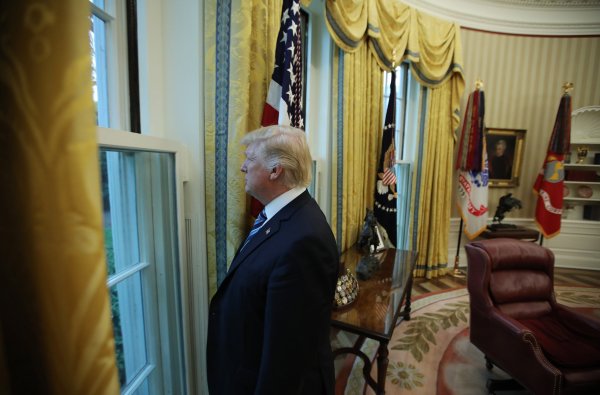