The Surprising Role of Clergy in the Abortion Fight Before Roe v. Wade

“Today I want to speak to The Challenge of the Sexual Revolution, or to The Use of the Body in Regard to Abortion,” declared the Reverend Charles Landreth on, June 6, 1971. From the pulpit of First Presbyterian Church in Tallahassee, Fla., Landreth invited those present to imagine different situations that led to a “problem pregnancy.” Landreth prodded his congregants, asking them to consider what an unwanted pregnancy and lack of access to abortion could mean to an older married woman, a young woman who had been raped or a high-school girl “scared literally to death to tell her staunch Catholic parents and therefore very tempted to run to a quack.”

That Sunday, at Tallahassee’s oldest church, Landreth argued that Jesus’ declaration that the first stone should be cast by those “among you without sin” was a “radical challenge to the Scribes and the Pharisees and to their conception of morality and authority.” Invoking these scriptural passages, Landreth protested against the immorality of Florida’s laws, which prohibited abortion unless the pregnancy endangered a woman’s life.

Toward the end of his sermon, Reverend Landreth revealed to his congregation what they may have already learned from Florida newspapers in the preceding weeks: he and his colleague Leo Sandon had been helping women in Tallahassee obtain abortions.

Landreth and Sandon’s abortion referral activities at Florida State University had drawn the attention and anger of a state senator and a district attorney who in turn denounced them in the press. After twice appearing before a grand jury, the clergymen worried that they would be charged and prosecuted.

But Landreth and Sandon were not alone. Their experiences reveal how, in the half-decade before Roe v. Wade, respected religious leaders participated in a nationwide struggle to make abortion more accessible. This largely forgotten history undercuts the popular myth that religious people oppose abortion rights. Fifty years ago this month, in May of 1967, as mainline Protestants and Reform Jews called for the liberalization of abortion laws, a group of clergy in New York City founded the Clergy Consultation Service on Abortion (CCS), an international network of clergy that helped women obtain legal and illegal abortions from licensed medical professionals. When Landreth spoke out, it was as part of CCS, which by then counted over 2,000 other ministers across the United States and Canada as members.

“Whenever we try to make conditions for each other more human, we are engaged in a religious pursuit,” Landreth once explained. “Christians and the Christian church simply cannot turn their backs on the problem of abortion and the dilemmas which it creates.”

As trusted members of their communities to whom congregants turned for counseling, clergy witnessed a medical crisis unfolding because of restrictive abortion laws. In the 1950s and 1960s, prohibitions against abortion drove anywhere between 200,000 and 1.2 million women to obtain illegal abortions. By the end of 1972, the CCS had helped between a quarter and half a million women obtain safe legal and illegal abortions from physicians.

CCS members also demanded that their state legislators repeal abortion laws, and publicly testified for that cause. In 1968, Reverend Carl Bielby spoke with Michigan lawmakers who were conducting public hearings on that state’s abortion laws. Bielby was a leader of Michigan’s CCS. At the hearing he represented the Michigan Council of Churches’ position that, “as a matter of human right, each woman be given the control of her own body and procreative function, and that she has the moral responsibility and obligation for the just and sober stewardship thereof.” Likewise, Reverend Allen Hinand of the Philadelphia CCS proclaimed at a 1972 legislative hearing that it was time for women to “rise up and take control of a situation and a choice that belongs to them as females.”

Most importantly, CCS clergy emphasized that no single religion had a right to impose its religious values upon others. For these clergy, freedom of religion had to include freedom from those religious groups that sought to place restrictions on abortions.

Indeed, Florida’s state-led anti-abortion efforts prompted Reverend Landreth’s sermon in the summer of 1971. Fearing prosecution, he decided to challenge two Florida statutes, which prohibited advising, aiding or assisting women “to procure miscarriage” and likewise banned the circulation or distribution of material that gave “any  advice, direction, information or knowledge may be obtained for the purpose of causing or procuring the miscarriage of any woman pregnant with child.” With the official backing of both the Synod of Florida’s Presbyterian Church and his own First Presbyterian Church, Landreth filed a lawsuit and asked for an injunction prohibiting the district attorney from prosecuting the CCS.

In September of 1971, a three-judge panel rejected the clergymen’s case as “too speculative.” The court did not rule on the validity of Florida’s abortion statutes. However, other courts were willing to evaluate the constitutionality of these statutes as numerous groups challenged abortion laws. Three months later, an Alachua County judge declared these same statutes unconstitutional when he voided charges against a University of Florida student who had circulated a list of abortion referral agencies on campus. The following year, Florida’s Supreme Court invalidated the state’s abortion law as unconstitutionally “vague, indefinite and uncertain.”

The history of Reverend Landreth and Reverend Sandon’s brief and unsuccessful legal battle is remarkable, not because of what it accomplished, but because it occurred at all. Across the country, most police, politicians and prosecutors turned a blind eye to the CCS or quietly endorsed its activities. The moral authority of CCS clergy offered them protection when they broke the law. The Reverend Charles Straut led the New Jersey branch of the CCS and managed, among other things, to have his group’s phone number listed on the first page of every New Jersey phone directory from 1968 onward. In an interview, he reflected on how his status as a clergyman enabled him to avoid punishment: “It’s hard to remember and hard to imagine if you are not old enough to remember how clergy were treated in those days.”

Fifty years ago, the CCS offered public moral and practical support to women who wanted abortions and to the doctors who performed them. After Roe, many branches of the CCS disbanded while others merged with local Planned Parenthoods or formed new reproductive health organizations. The CCS, in other words, shaped many of the institutions that continue to help women control their reproductive lives. Recovering the history of the CCS reminds us that contemporary demands for reproductive rights and abortion access, far from being secular or immoral, had and continue to have deep moral and religious roots.

Gillian Frank is a Managing Editor of NOTCHES: (re)marks on the History of Sexuality and a Visiting Fellow at Center for the Study of Religion at Princeton University. He is currently working on a book manuscript entitled Making Choice Sacred: Liberal Religion and Reproductive Politics in the United States Before Roe v. Wade. Gillian tweets from @1gillianfrank1.

If you were a CCS member or a woman who received abortion counseling from the CCS and wish to be interviewed about your experiences, please contact the author at clergyconsultationservice@gmail.com 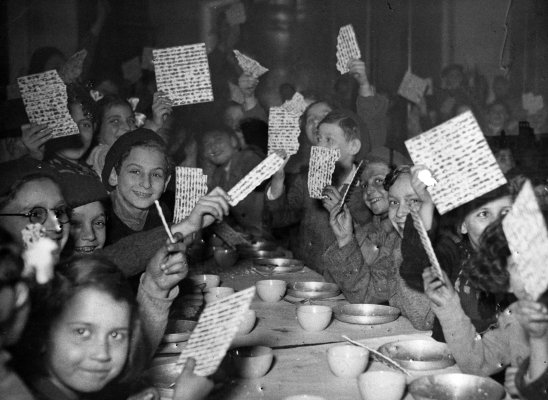 See Rare Footage of Passover Celebrations After the Holocaust
Next Up: Editor's Pick