Pope Francis surprised the attendees at the 2017 TED conference by beaming in from the Vatican for a talk, where he preached “humility and togetherness” and argued for a “revolution of kindness.” While attendees at the annual gathering of innovators, futurists, activists, and tech gurus are used to a star-studded stage, the arrival of the Pope seemed particularly moving, even for secular watchers.

Sephen Colbert, though, was impressed for an altogether different reason: “I think it’s impressive for an 80-year old to set up his own web cam,” the comedian joked, noting, “It’s not like he can get help from the grandkids.”

While the Pope’s surprise appearance at TED would be hard to top, Colbert was up to the challenge. He knew one guy who could upstage the Pope—Jesus Christ himself. “I come to you today as a simple carpenter, who also happens to be the son of God,” said “Jesus” on The Late Show on Wednesday evening. “But I didn’t get here today through nepotism.” Jesus used his time on the TED stage to deliver a powerful speech about his new pilot program that involves “turning the other cheek.” 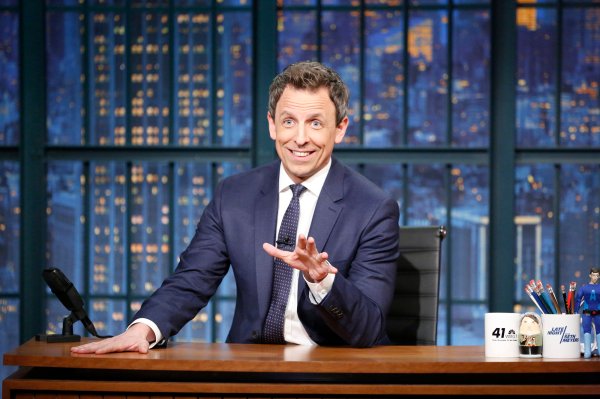 Seth Meyers Says Trump Has 'Completely Backtracked' in Blistering Takedown of His Executive Actions
Next Up: Editor's Pick