The Real History Behind Picasso's Guernica

A flight of bombers from Nazi Germany’s Condor Legion and Italy’s Aviazione Legionaria pummelled the Basque town Gernika for three hours on April 26, 1937. As incendiary bombs rained down on the defenseless settlement, civilians fled into the surrounding fields, where they were mercilessly strafed by the aircrafts’ machine guns. That night, the heartland of Basque identity crumbled in the ensuing firestorm.

Since the military uprising against the left-wing Popular Front government in July 1936, the Spanish Civil War had galvanized thousands worldwide. The Soviet Union marshaled the International Brigades to assist the Spanish Republic. Meanwhile, the fascist powers supported the Nationalists, a motley confederacy of Spain’s traditionalist groups, spearheaded by the army. Incensed by the Republic’s concessions to regional autonomy, Gernika’s fate brought the Nationalist ambition for Spain – “Una, Grande y Libre” (“One, Great and Free”) – into devastating relief. It marked a sea change not only in this war but of modern civilization itself; a transformation Pablo Picasso captured in his painting, Guernica.

The Times’ correspondent, George Steer, published the first English-language account two days after the attack. Eyewitness to the immediate aftermath, Steer unequivocally blamed the Luftwaffe for the atrocity. The article went global and it was from his home in Paris that Picasso encountered it. Just three months earlier, delegates from Madrid had commissioned him to produce an artwork for the Spanish pavilion at that summer’s International Exposition in Paris. By courting Spain’s greatest living artist, they hoped to amplify the Republic’s plight to the world.

For Picasso, Gernika’s destruction offered a breakthrough after weeks of creative paralysis. Simultaneously, Nationalist and German protestations of innocence and their bogus attempt to pin the assault on Republican saboteurs duped many. Their mendacity was so contrived that Lieutenant Count Max Hoyos, who had participated in the operation, labelled a reconnaissance photograph of the incident: “Guernica as destroyed by the Reds.”

Picasso resolved to express his “abhorrence of the military caste which [had] sunk Spain in an ocean of pain and death.” His mural-sized canvas would exhibit the truth indelibly. Starting on May 1, 1937, and working feverishly through to early June, he completed it just weeks before the Exposition’s opening. When it debuted that July, its Republican sponsors, expecting buoyant agitprop, were left vexed by the desolate scene that greeted them.

The art critic and Soviet agent Anthony Blunt dismissed it as a “private brainstorm.” The Basque President, José Antonio Aguirre, lambasted it as “pornography,” an affront to Basque suffering. The painting embarked on a tour of democratic Europe, raising funds for the Republican war effort. But following General Francisco Franco’s victory in April 1939, Guernica became a refugee, entrusted to the Museum of Modern Art (MoMA) in New York by Picasso, pending the reconstitution of a Spanish republic.

For over 40 years the painting remained in the United States. Its stark composition and apocalyptic vision soon resonated, as the likes of Coventry, Dresden and Hiroshima joined a grisly roll call of urban infernos headed by Gernika. Notwithstanding its title, nothing about Guernica explicitly links it to the event behind its creation. This ability to transcend context has enabled it to assume a function unique in the history of art.

Guernica’s unmistakable characters have become fixtures of antiwar iconography, from the Vietnam War protests to the West Bank barrier. In February 2003, a tapestry reproduction at the United Nations in New York was hidden from view as the U.S. delegation addressed the world’s media ahead of the “shock and awe” bombardment of Baghdad. Guernica has become humanity’s shorthand for moral outrage at state-directed transgressions against civil equilibrium.

Yet it has always been a “Spanish” artifact. In the 1960s, an ailing Franco made overtures to acquire it. The prospect was clear: the regime’s custody would obfuscate the painting’s aspersions on the falsification of April 26, 1937. Franco’s death in 1975 ushered in astonishing change throughout Spain. The transition to democracy elicited negotiations to relocate Guernica to Madrid. MoMA resisted, citing the non-existence of a new republic as contrary to Picasso’s wishes. Nevertheless, in September 1981, Guernica arrived “home.” The painting had hitherto never been on Spanish soil but the sense of closure led El País to headline with: “THE WAR HAS ENDED.” As the ongoing dispute over Spain’s “historical memory” of the Civil War reveals, Guernica has not been the panacea many hoped for.

No other object speaks so clearly to the Spanish experience. Initially shielded behind bulletproof glass and flanked by armed guards in the Prado, Guernica’s installation in the Spanish capital remains a source of contention between the central government and the devolved Basque authority. The 1990s saw the painting moved for a final time to the Reina Sofía gallery. The opening in 1997 of Bilbao’s Guggenheim Museum, built with a ready-made space for Guernica, keeps the faint hope of a Basque institution housing the depiction of a Basque catastrophe alive.

Picasso was reticent about Guernica’s imagery. Nonetheless, the light sources at its apex suggest his preoccupation with truth. A sawtoothed electric light looms overhead, remote, artificial and hostile, signifying the modern state’s misuse of technology to terrorize and overwhelm. Nearby, a defiant arm holds out a flame amid the organic wreckage of the civic landscape, symbolizing the inextinguishable truth. Pertinent to our time, the bulb also evokes the manipulation of image-capture by the state to spy on citizens against the flare of artistic ingenuity designed to enlighten humanity.

Some believe we now inhabit a “post-truth” epoch where popular antipathy towards expert insight and “fake news” blur the parameters of verifiable scrutiny. This is nothing new. How can the black-and-white veracity Guernica stakes itself on not flash in our collective conscience following Kellyanne Conway’s recent endorsement of “alternative facts”? Had Picasso not applied brush to canvas would we even care about what really happened to a small Biscayan town 80 years ago? Guernica reminds us that the sin of ignorance invites the abuse of history.

Danny Bird is a graduate of UCL School of Slavonic and East European Studies, with a special interest in modern Spanish and Russian history. @dannymbird 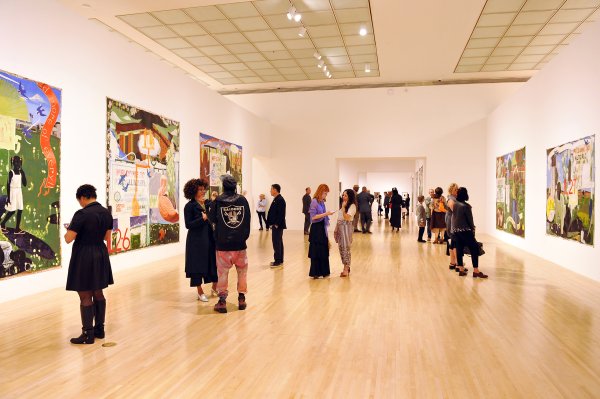 Our Arts Programs Treat Children As Problems, Not Solutions
Next Up: Editor's Pick