Hundreds of protesters in the South Korean town of Seongju clashed with police Tuesday night as trailers carrying components of the U.S. advanced missile defense system known as THAAD rolled through en route to a nearby installation site.

“We are working with the ROK (South Korea) to complete the deployment of THAAD, a defensive weapons system, to the ROK as soon as feasible,” the Pentagon stated to Yonhap.

Reuters quoted South Korea’s defense ministry as saying that elements of THAAD had been moved to the site “in response to North Korea’s advancing nuclear and missile threat.”

Protesters in the quiet town of Seongju reportedly carried signs reading, “No THAAD, No War” and “Hey, U.S.! Are you friends or occupying troops?”

Kim Jong-kyung, co-head of a group of villagers protesting the THAAD deployment, told Reuters that more than ten people had been injured in clashes with police and some had suffered broken bones.

Daniel Pinkston, Northeast Asia deputy project director at the International Crisis Group in Seoul, tells TIME that while much of the local opposition to the installation of THAAD could be attributed to parochial concerns, the presence of non-locals at the demonstrations indicates “concerns about the THAAD battery and how it will affect national security, regional security, and regional stability.”

Pinkston, however, described the installation as prudent. He called the missile defense system “one tool in a basket of instruments,” U.S. military strategists would have at their disposal to “alter the calculus of North Korean leadership” as they seek to maintain the Korean Armistice Agreement and their bilateral defense treaty agreements.

Tensions between Washington and Pyongyang have escalated in recent weeks: the U.S. has deployed an aircraft carrier group and nuclear submarines to the region amid fresh missile test attempts by North Korea. The 85th founding anniversary of North Korea’s military on Tuesday also saw dictator Kim Jong Un preside over the country’s “largest-ever” live-fire drill.

South Korea’s decision to accelerate the deployment of THAAD has been both divisive domestically and strained Seoul’s relationship with Beijing, which regards THAAD’s powerful radar as a security and surveillance threat. South Korean companies operating in China have been hit by consumer boycotts over the issue. 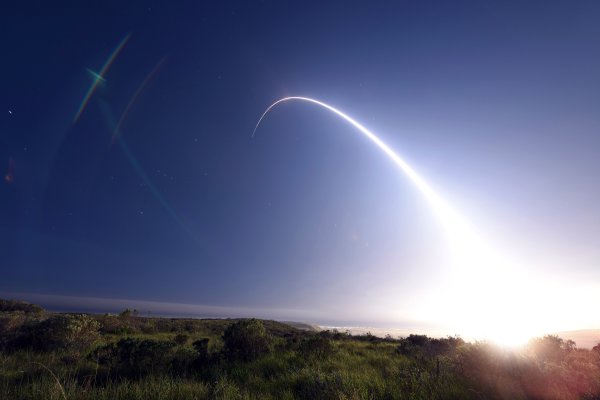 U.S. To Conduct ICBM Test
Next Up: Editor's Pick