President Trump’s decision to strike Syria after its use of chemical weapons and his decision not to label China a currency manipulator to win its support against North Korea’s nuclear missile development are key components of an emerging “Trump Doctrine,” White House Chief of Staff Reince Priebus told reporters Tuesday.

Trump is “reshaping our position in the world,” Priebus said, and “really establishing, I think, a Trump Doctrine in setting some certain lines of where we’re not going to allow people like [Syrian President Bashar al-Assad] to go, but at the same time making it clear that we’re not interested in long-term, you know, ground wars in the Middle East, but obviously focusing in on ISIS and what we’re doing in the Middle East to protect us here in the United States, working with China on ongoing issues with North Korea that are very real and are serious issues that takes cooperation within the region to handle appropriately.”

Priebus’ attempt to articulate the President’s foreign policy came as Trump approaches his 100th day in office, with his Administration facing critical decisions in the coming weeks on how to escalate the fight against ISIS, whether to bolster the U.S. troop commitment to stabilize Afghanistan and just how far will he go to upend North Korea’s nuclear missile program. But the Chief of Staff stopped short of articulating the kind of unified worldview embraced by many of Trump’s predecessors, instead laying out a transactional approach to dealing with foes and allies alike.

“Look at Egypt, [he] took some criticism with the al-Sisi meeting,” the official said. “Ten days later, suddenly the prisoner’s coming home.”

“It also means that he loves people,” the official said of what the Administration dubs the Trump doctrine, “and he knows that there are certain things that some people do that are unacceptable like the nerve gas attack in Syria. The official added that the doctrine includes remaining tough against the Islamic State and being prepared to take unilateral action to prevent North Korea from obtaining a missile system capable of carrying a nuclear warhead to the United States. “He’s someone that’s going to stick to his guns on ISIS and making sure that we don’t sit around loose and lax and let a country like North Korea continue to proliferate nuclear weapons and grow to a point where we’re simply reacting to an ICBM one day after we wake up a and realize that we haven’t done anything for fear of some other alternative.”

The official added that Trump’s status as “an incredible negotiator” is also central to the doctrine. “You look at President Xi. Well, he didn’t call China a currency manipulator because he’s helping us with North Korea,” the official said. And Trump has been “playing nice with NATO” because many countries have boosted their financial commitments to the alliance after pressure from Trump. 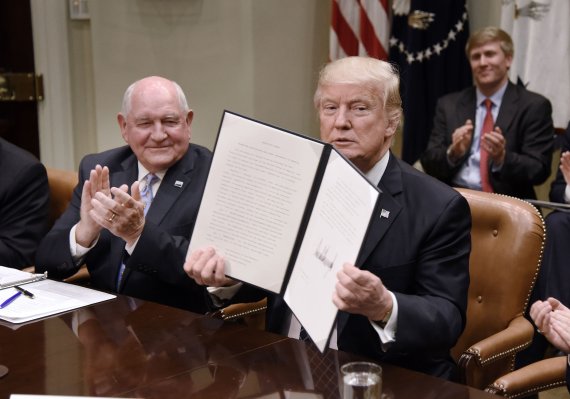 Trump: Canada Has Outsmarted U.S. for Years
Next Up: Editor's Pick