5 Questions Congress Needs to Answer to Avoid a Government Shutdown

Washington is just days away from a government shutdown, a recurring threat that everyone dreads but no one is very good at avoiding.

Democrats and Republicans in Congress are hurriedly negotiating a compromise to fund the government, a task that is fraught with perils and endangered by President Trump’s periodic interference.

The spending bill will require 60 votes to pass through the Senate, and Republicans only have 52. That means Democrats and Republicans will have to agree on the bill’s provisions by Friday, when funding for the government expires.

At issue are five key questions about how to appropriate money in the bill to keep the government funded.

Paying for a border wall

But Trump has since backed off early promises to build the wall quickly. Democrats took a tough stand early on, threatening to shut down the government if Trump pushed spending for the wall into the must-pass government funding measure. This week Trump said he would not push Congress to pay for the wall (a price tag of upwards of $20 billion) as part of the spending bill due this week.

“The wall’s going to get built, folks,” Trump said on Tuesday. “We have plenty of time. We’ve got a lot of time.”

Now, there are discussions this week about whether to fund border security, which would include other kinds of physical barriers and surveillance.

The open questions: will Trump change his mind? How much money will be appropriated? What counts as a wall? Will Democrats seek a concession in exchange for border funding?

“Democrats have always been for border security, we just think the wall makes no sense,” said Senate Minority Leader Chuck Schumer. “We’re not going to allow any dollars in any kind of appropriations negotiations to be used for a wall.”

Without the government’s “cost-sharing subsidies” paid to health insurance companies — totaling $7 billion per year — Obamacare would likely collapse. That’s why it’s becoming a sticking point in the spending negotiations.

Currently, the subsidies are paid by the Department of Health and Human Services. Trump can continue dispensing the money, or Congress can appropriate it as part of its spending bill.

A federal court ruled in 2016 that the subsidies were unconstitutional unless Congress officially appropriates the money, but allowed the executive branch to continue spending while the decision is appealed.

Democrats want Congress to include that money in the spending bill due on Friday, rather than relying on President Trump to dispense the subsidies. That would ensure the Obamacare markets stay solvent and insurers receive compensation for reducing deductibles and out-of-pocket costs for some low-income health care consumers.

Some Republicans, like Sens. Bill Cassidy and John Hoeven, have expressed openness to the idea.

“I think we want to keep the market stable. It’s probably going to require that the existing method for doing that the cost sharing subsidies remain in place for a while,” said Sen. John Thune, the third-ranking Republican in the Senate.

But Trump has threatened to cut off the subsides. And the White House has floated using the subsidies as a bargaining chip with Democrats for border security funding.

Expect lawmakers and the White House in the next couple of days to hash out differences over the crucial cost-sharing subsidies.

In 1946, the United Mine Workers president and the U.S. Secretary of the Interior signed a deal requiring coal companies to cover health insurance and pensions for coal miners. But after rounds of bankruptcies and troubles in the coal industry, those funds have been depleted. Coal miners are asking the federal government to step in.

Some Republicans and Democrats have called for federal funding to shore up coal miners’ safety net. Democratic Sen. Joe Manchin of West Virginia has been a particularly strong proponent of securing benefits for miners in his state. Senate Majority Leader Mitch McConnell has said he wants miners’ benefits funded.

The question is whether the benefits are included in the current bill. The temporary funding secured by Manchin expires this week. Some are hoping that President Trump, who ran as a champion of the coal industry, will step in.

“I am in favor of a permanent fix on miners’ health care. I hope for that to be included in the bipartisan package,” said Sen. McConnell.

Sens. John McCain and Lindsey Graham have been adamant about increasing defense spending as part of the government funding bill, arguing that key defense programs are not receiving the resources they need.

If the government continues spending at the same levels it has been through a so-called “continuing resolution,” or C.R., Sen. McCain has vowed to vote against the measure. “I will do anything I can do to stop a C.R. It is killing our military,” McCain said Tuesday. A Republican defection in the Senate could be deadly if not enough Democrats get on board to support the bill.

Kicking the can down the road

If dysfunction sinks the talks and the disagreements aren’t worked out by the end of the week, Congress may decide to extend the current funding levels for days or weeks.

That could be Congress’ best compromise to keep the government open. Asked whether that was the most likely outcome, Graham was terse. “Probably. And I’m okay with that,” he said. 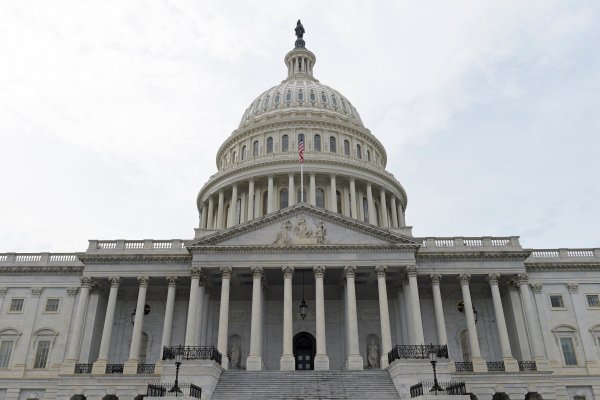 There Might Be a Government Shutdown This Week. What's That?
Next Up: Editor's Pick