It might be hard to imagine, but yes, that’s actually buff Fast & Furious star Vin Diesel voicing baby Groot in Guardians of the Galaxy Vol. 2.

The trisyllabic tree was hard enough to voice in the original Guardians film. Diesel was limited to the words “I am Groot” to express a whole range of emotions throughout the film. But a heroic sacrifice at the end of that movie led to Groot’s destruction and rebirth as a tiny potted plant. Now it’s baby Groot who graces the new Guardians movie, and this time around, his voice is much higher.

Still, director James Gunn decided to stick with the gruff-voiced Diesel for the adorable character. Gunn told Entertainment Weekly that he did very little in post-production to change Diesel’s baby Groot voice. “I mean, there’s a tiny amount of processing that we do on a few of our characters, but it’s very little. It’s mostly just Vin’s voice. He’s able to, you know, speak in a much higher register than he normally does.”

Diesel, who has said he gets a secret script with the meaning behind all of his lines, had to hit his upper registers to voice the character. But diehard fans of Diesel won’t be surprised by his range: The actor posts videos of him singing on social media all the time. He also proved he could change his register during an April appearance on The Tonight Show Starring Jimmy Fallon when he sang “Lean on Me” in a Chipmunk voice. 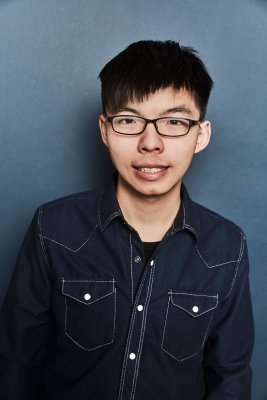 Watch the Trailer for Award-Winning Documentary About Hong Kong Teenage Activist
Next Up: Editor's Pick