Ivanka Trump Says Her Dad Champions Women. What About Your Own Father?

Ivanka Trump got booed after defending her father as an advocate for women at a panel at the W20 summit in Germany on Tuesday.

While being questioned about President Donald Trump’s views of women, the first daughter and White House adviser responded with a line that she used on the campaign trail: that her father supports women because he has personally championed and empowered her career. “I’ve certainly heard the criticism from the media and that’s been perpetuated, but I know from personal experience, and I think the thousands of women who have worked with and for my father for decades are a testament to his belief and solid conviction in the potential of women,” she said. “As an adviser and as a daughter, I can speak on a very personal level knowing that he encouraged me and enabled me to thrive.”

Supporting his daughter or women he paid to work for his business doesn’t make Trump a feminist. He’s made a number of sexist comments and was accused of sexual misconduct by a number of women (claims which he denies). On one of his first days in office, he reinstated the Mexico City Policy, which bars international groups that perform abortions or provide information on the procedure from receiving federal funds. He supported a health care bill that would have slashed funding to Planned Parenthood and engaged in discussions about ending a requirement that mandates all insurers cover maternity and pregnancy care.

The first daughter has faced sustained criticism for continuously defending her father while also positioning herself as an advocate for female empowerment. But she has said that she loves her dad and wants to “fully support” him. And Ivanka Trump is not the only political daughter to do so.

Earlier this month, Jenna Bush Hager called her father, President George W. Bush, a feminist because he encouraged her to pursue her dreams and become an independent person. Critics noted that Bush supported anti-feminist policies while president, including the Mexico City Policy and a ban on later-term abortion.

Chelsea Clinton has supported her father, President Bill Clinton, through allegations of sexual assault and misconduct (which Clinton has denied) and his past infidelities. In an interview with Cosmopolitan during her mother’s presidential campaign, she brushed off Trump’s attacks on her father. “I find what Donald Trump — and many of the Republicans, because it’s not only Mr. Trump — say about Americans far more troubling than what he says about my parents,” she said. “And people have been attacking my parents my whole life, so maybe I am just inured to that, but I tend to think that people who are at the forefront of progress do attract more negative attention from those who want to protect the status quo.”

Outside of the political sphere, Bill Cosby’s youngest daughter, Evin Cosby, published an essay on Wednesday that said knows her father “loves and respects women” because of his treatment of his female family members. Cosby has been accused of sexual misconduct by a number of women, which he denies. He will stand trial in June for allegedly sexually assaulting Andrea Constand in 2004. He has plead not guilty in that case.

“He raised me to go to college, start my own business, and be my own woman. He is helping me raise my children and teach them family values. I know that my father loves me, loves my sisters and my mother,” she wrote. “He is not abusive, violent or a rapist.”

And men often invoke their daughters when speaking out about sexism. President Barack Obama wrote in an essay for Glamour that raising two daughters made him “more aware of how gender stereotypes pervade our society.” After the release of a 2005 tape that showed Trump boasting about how he could do anything he wanted to women, many lawmakers mentioned their daughters in their statements condemning the then-presidential candidate’s remarks.

“As the father of three daughters, I strongly believe that Trump needs to apologize directly to women and girls everywhere, and take full responsibility for the utter lack of respect for women shown in his comments on that tape,” Senate Majority Leader Mitch McConnell said at the time. McConnell has his own critics for his treatment of women — most notably after he silenced Senator Elizabeth Warren on the Senate floor earlier this year.

Do you think your father is a feminist? Answer our poll below and reach out to samantha.cooney@timeinc.com if you’d like to share your own story about your dad. 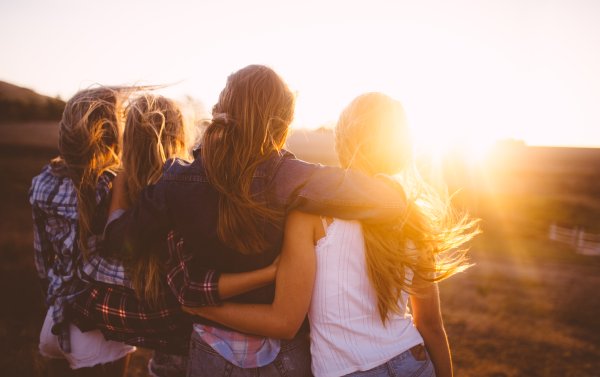 What I've Learned About Family Since Mine Fell Apart in My 20s
Next Up: Editor's Pick