What You Need to Know About Afghanistan's Worsening Security Challenge

An Afghan national Army stands guard at a checkpoint on the outskirts of Kabul, Afghanistan, April 22, 2017.
Rahmat Gul—AP
By Nikhil Kumar

Just over a week after the U.S. dropped the so-called ‘Mother of All Bombs’ on ISIS fighters in eastern Afghanistan, a bloody attack on an Afghan army base has highlighted the country’s central security threat — the Taliban insurgency.

The deployment of the 21,000 lbs GBU-43 bomb, the largest non-nuclear device ever used in combat, in Afghanistan’s Nangarhar province generated global headlines and was described by President Donald Trump as a “very successful mission.” But although ISIS has claimed several attacks in Afghanistan, including a raid on an Afghan army hospital in the capital Kabul in March that killed dozens of people, the April 21 raid on the army base in the northern city of Mazar-e-Sharif has underlined the worsening of the Taliban insurgency nearly two decades after the militants were ousted from the capital Kabul by a U.S. led invasion in 2001. The assault comes as Washington weighs a call from the top U.S. commander there for more American troops to continue the fight against the Taliban.

Here is what you need to know about the April 21 attack, the Taliban insurgency and what Washington might do next:

As many as 10 Taliban fighters dressed in Afghan army uniforms and driving military vehicles reportedly killed at more than a 100 Afghan soldiers on April 21. The scale of the attack — the bloodiest raid on security forces since the beginning of the war — shook Afghanistan. The Afghan President, Ashraf Ghani, condemned the attackers as “cowardly” and “infidels,” and a day of national mourning was declared over the weekend.

While the focus in Washington remains on combating the threat from international terrorist groups such as ISIS and al-Qaeda, the raid highlighted the Taliban’s ability to strike at the heart of the Afghan security apparatus, which remains weak, compromised by mismanagement and rampant corruption. The army base at the center of the attack serves as the headquarters of Afghanistan’s 209th Corp. Heavily guarded and located in what was considered one of Afghanistan’s safer cities, it is the largest Afghan army installation in the north of the country. That a small group of insurgents managed to breach the security net around the base and embark on an hours-long killing spree raised troubling questions about the ability of Afghan security forces to counter the insurgency and sparked the resignations of the country’s defense minister and army chief. Ghani also reshuffled the local army leadership, as the Taliban threatened further attacks.

It came as the Taliban makes territorial gains across the country

Alongside increasingly bloody attacks, the Taliban has been capturing more ground in Afghanistan following the end of the Nato combat mission and the exit of most foreign troops from the country in 2014. In mid-November, 2016, only around 57% of the country’s 407 districts were under Afghan government control or influence, according to the latest assessment from the U.S. Special Inspector General for Afghanistan Reconstruction. That was down almost 15% from November, 2015, as the Taliban expanded its influence, engaging in clashes with security forces across the country.

As the fighting intensifies, the number of civilians killed or injured in the conflict has climbed to record highs, according to the U.N. More than 11,000 civilians were killed or injured in 2016, including more than 3,000 children, with the international body attributing responsibility for the vast majority of casualties to anti-government forces — mainly the Taliban.

Concerns are also growing about Russian support for the Taliban, with the top U.S. commander in the field, Gen. John Nicholson, telling reporters in Kabul on April 25 that he was “not refuting” claims that Moscow was providing weapons to the insurgency.

The worsening situation presents a challenge for the U.S., as it weighs its presence there

The deterioration on the ground forced the Obama administration to scrap plans of leaving office with only a small U.S. embassy-based force in Kabul. Instead, the former U.S. President stepped down with more than 8,000 American troops still stationed in the country. Now, the Trump administration is weighing a call to increase the U.S. footprint in Afghanistan, with Gen. Nicholson telling the Senate Armed Services Committee in February that “we have a shortfall of a few thousand” troops there. His views were echoed a month later by Gen. Joseph Votel, the head of U.S. Central Command, who said: “I do believe it will involve additional forces to ensure that we can make the advise and assist mission more effective.”

So far, however, there has been little clarity from the White House about what it plans to do next. On April 24, as the Mazar-e-Sharif attack triggered the exit of Afghan military chiefs, U.S. Defense Secretary James Mattis made an unannounced stop in Kabul to assess the picture on the ground as he prepares his recommendations on America’s future strategy. “2017 is going to be another tough year for the valiant Afghan security forces and the international troops who have stood, and will continue to stand, shoulder to shoulder with Afghanistan against terrorism,” he said. 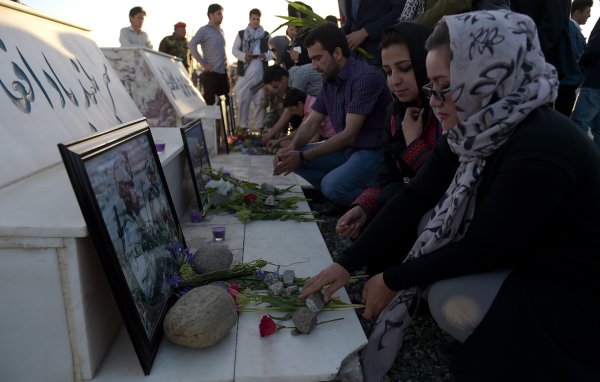