Japanese authorities have admitted that citizens can expect a mere 10-minute warning of a North Korean missile attack. The disclosure comes at the same time as a massive spike in interest in a civil-protection website run by country’s Cabinet Secretariat, where views have surged almost sevenfold from March to reach 2.6 million this month.

According to the Japan Times, regional disaster-management officials meeting in Tokyo last week called for the implementation of a national system of drills, and for changes in the law to make it easier for them to order mandatory evacuations.

However, Hirofumi Yoshimura, the mayor of Osaka — a city of 8.8 million — told the Times: “A missile may not be detected as soon as it leaves the launch pad … and that could take several minutes.” He added: “The warnings and alarms might only sound four or five minutes before a missile arrives.”

A man in Tokyo walks in front of a news video reporting a military parade marking the 105th anniversary of the birth of late North Korean leader Kim Il Sung on April 16, 2017.
Kazuhiro Nogi—AFP/Getty Images

In the event of a North Korean strike, Japanese are presently being advised to seek shelter underground or in strong concrete buildings. Those unable to do so are advised to get low on the floor or crouch under tables. Schoolchildren in Osaka are being told to hide under desks, the Times reports.

Regional tensions are extremely high following revelations that North Korea could be preparing for its sixth nuclear test in defiance of international warnings. Nikki Haley, Washington’s U.N. ambassador, has said that the U.S. will retaliate against North Korea if it tests an intercontinental ballistic missile or attacks a U.S. base.

Rapid advances made by North Korea in ballistic-missile development have made Japan extremely vulnerable. The country is home to around 54,000 U.S. troops, making Japan a target if conflict breaks out on the Korean Peninsula. 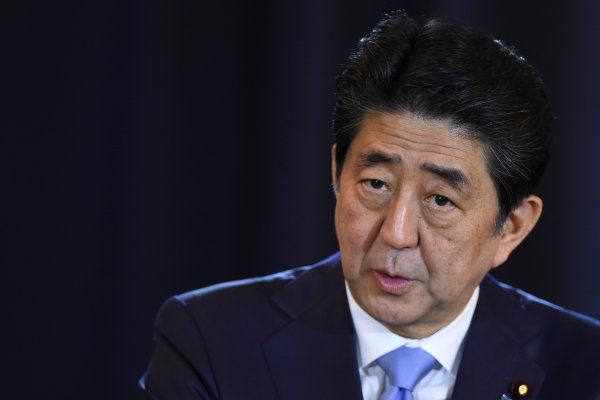