Staring down a potential government shutdown, the White House is prepared to punt a standoff over cash to build a wall along the U.S.-Mexican border to the fall, Republican officials tell TIME.

The Trump Administration had insisted that funding for the wall must be part of a spending bill Congress is set to consider before Friday, when the government runs out of money. Congressional leaders in both parties had warned the White House that such a demand would unify Democrats in opposition at a moment when it’s likely Republicans will need their votes to clear Friday’s deadline.

As late as Monday afternoon the President was still pushing for border funding, but aides started to peddle ideas that perhaps Trump could still claim a win if there were boosted funding for border security—think drones and border guards, not bricks and barbed wire—as a way to save face.

At the White House, the President told a gathering of conservative journalists that his team could revisit the issue in September. Separately, White House officials phoned colleagues in the Senate and House to offer similar guidance, according to two aides to Senate Republicans.

Congress returns from a two-week break on Tuesday and immediately starts a clock ticking down toward Friday’s deadline. If Congress cannot clear a spending bill by midnight, the government would be plunged into shutdown just as Trump is marking his first 100 days in office. Such a development—with Republicans controlling all the levers of power—would certainly give the President unwelcome headlines for his first grading period.

The White House already is testy about the milestone. Aides are furiously promoting victories, such as the confirmation of Supreme Court Justice Neil Gorsuch, administrative moves on coal and steel and rollback of President Barack Obama’s regulations that came late in his second term. But Trump is particularly sensitive to his lack of progress on his 100-day promises he made during the campaign—chief among them, the border wall and the repeal of Obama’s health care law.

Trump, however, is confronted with the political reality: the Republican Party is not unified on any number of issues. An effort to ditch the health care law ended in embarrassment. A reboot, attached to the looming shutdown, had no takers in congressional leadership because it, too, could plunge the government into chaos. The public push to find money for the border wall appeared to have the same threat.

Perhaps looking to distract from the border bungling, Trump on Wednesday plans to unveil a bid to reform the tax code—no less challenging than passing health insurance or immigration. His economic team renewed the conservative pipe dream that the taxes would be so simple that most Americans could complete them on a postcard. His team promised deep tax cuts but dodged when asked how the government might pay for them.

Left unsaid amidst the tax code talk: the reforms being discussed would eliminate dozens of deductions that are popular, such as allowing homeowners to write-off interest on their mortgages and charitable contributions. Gimmicks, once again, are set to run hard into the wall of governing—the only wall that seems real in Washington at the moment.

— With reporting by Zeke. J. Miller. 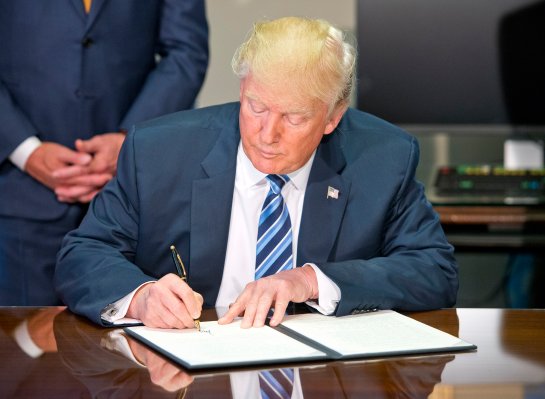 Trump's 100-Day Goals Could Lead to a Shutdown
Next Up: Editor's Pick