A United Airlines plane had a ‘terrifying’ emergency landing after one of its engines overheated over the ocean, according to a reporter who was on board the plane.

United Flight 1516 bound for Houston, Texas, from Liberia, Costa Rica, because of the engine problem on the Boeing 737-800.

“One of my plane’s engines overheated over the ocean. We about crashed in an emergency landing before the pilot quickly pulled up. So scary,” Jody Genessy, one of the passengers onboard, tweeted after landing safely.

“They stopped traffic into the Liberia, Costa Rica airport. Fire trucks, ambulances and emergency vehicles waited for us to land. Freaky,” he continued. “We circled over the ocean for an hour to burn fuel before landing. I fly a lot. This was the most frightening thing I’ve ever experienced.”

United Airlines did not immediately respond to requests for comment.

According to local reports, the plane took off from Daniel Oduber International Airport then landed back at the airport about two hours later.

Leonel Jiménez, Fire Supervisor of Costa Rica, confirmed to local media outlets that the airport was put on alert 3. “It comes with an emergency overheating in an engine, the units are waiting,” Jiménez said in a statement.

“What I have is a United 737-800 aircraft, which is being maintained in Liberia’s airspace, is burning fuel to safely land again,” Enio Cubillo, director of Civil Aviation, told the local news. “At the moment he is holding to burn enough fuel to land safely.”

According to FAA guidelines, modern twin-engine jets can fly for hundreds of miles on one engine. If a twin-engine jet conducts over-the-ocean operations, it is required to be able to fly for hundreds of miles, and sometimes more than 1,000 miles, on one engine. The FAA investigates all incidents in which U.S. registered airliners experience engine problems.

David Dao, 69, was one of four passengers asked to leave an oversold Louisville-bound flight from Chicago’s O’Hare International Airport so airline employees could board the plane. The altercation left Dao bloodied and bruised as officials with the Chicago Department of Aviation dragged him through the aisle of the aircraft.

The Chicago Department of Aviation announced days after the incident that an officer involved has been placed on leave.

The attorney representing Dao told the Today show Monday morning he will be filing a lawsuit against United. 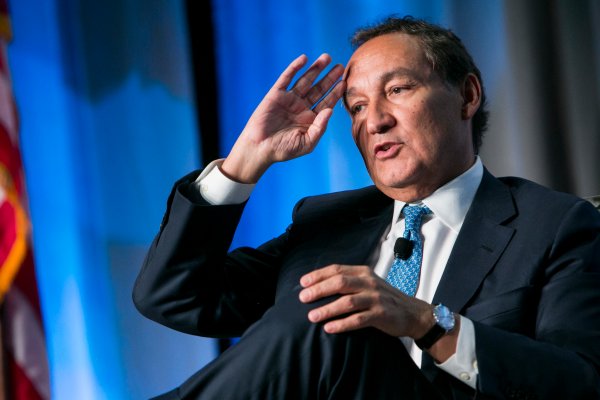 United Airlines CEO Won't Be Promoted to Chairman
Next Up: Editor's Pick