A Critical History of That ‘It’s Gonna Be May’ Meme

Once again, April will wind down with an important internet moment: the return of the “It’s Gonna Be May” meme on April 30, also known as “It’s Gonna Be May Day.” Relevant for one day of the year and one day only, it’s also one of the most consistent of annual viral sensations, harkening back to the good old days of *NSYNC and singer Justin Timberlake.

Ultimate celebrity Timberlake has spent most of his life in the public eye, maturing from a cute Mickey Mouse Club kid to a curly-haired teen heartthrob boy bander to the dapper family man he is today. But besides making Trolls music, dabbling in fashion, and photo bombing his wife on the red carpet, Timberlake’s claim to fame takes off on social media each spring as April fades away. “It’s Gonna Be May” is the meme that keeps giving, and it’s all thanks to the iconic voice and face of Timberlake. Here’s how the day became a beloved social media phenomenon.

How did the “It’s Gonna Be May” meme spread?

Back in his *NSYNC days, Timberlake contributed to the 2000 smash hit song “It’s Gonna Be Me.” The titular line, as sung by Timberlake, is enunciated with a distinctive twang — turning the final “me” into “May.” But it wasn’t until 2012 that the tune took on a whole new meaning, as internet users began to meme-ify the moment, according to database KnowYourMeme.

Even Obama got in on the celebration

The saying was popular enough that President Barack Obama (and his social media team) couldn’t resist jumping on the bandwagon back in 2014. Obama posted a picture of himself and Timberlake on Facebook on April 30 with the fateful caption; it racked up nearly half a million likes.

Justin Timberlake made it a yearly tradition

Even Timberlake himself has been able to poke fun at the phenomenon, tweeting about the meme year after year. Meta.

What’s Justin Timberlake’s back story for the lyric?

In a radio interview, Timberlake shed some light on the back story behind the unusual pronunciation that has driven the lyric to enduring fame: he was directed to say “me” as “May” thanks to legendary pop producer Max Martin, who also contributed to writing the song. “I think he just wanted me to sound like I was from Tennessee,” Timberlake explained, in his defense. For better or worse, that decision has meant that every year, the song gets a bolt of fresh life just as the spring flowers are beginning to come into bloom.

How did *NSYNC mark the day last year?

In 2018, *NSYNC received a star on the Hollywood Walk of Fame on April 30. All five members of the boy band — including Lance Bass, JC Chasez, Joey Fatone, Chris Kirkpatrick and Justin Timberlake — reunited to receive the honor of the 2,636th star in the category of Recording on the Walk of Fame. They joined other boy bands, like the Backstreet Boys, Boyz II Men, New Kids On the Block, and New Edition, who have also been honored with stars.

Bass, aptly, shared the news with a call-out to the “fitting” timing of It’s Gonna Be May Day: “How fitting this ceremony will take place on Its Gonna Be May Day! See y’all there!” he wrote on Twitter. Quite right.

What’s *NSYNC up to this year?

While Timberlake is wrapping up his “Man of the Woods” solo tour to promote his latest album, the rest of the band have been doing their own thing. However, at Coachella music festival in April, headliner Ariana Grande brought them out as surprise guests, spurring questions about a potential reunion for the beloved band. (Fellow early-oughts group Backstreet Boys recently put out a new album that performed well on the charts, suggesting the time might be right for a comeback.)

It was their first group performance since Timberlake went solo in 2002, effectively ending the group. Only time will tell if they plan a full-scale return to form — but “It’s Gonna Be May” Day would be a great moment to start. 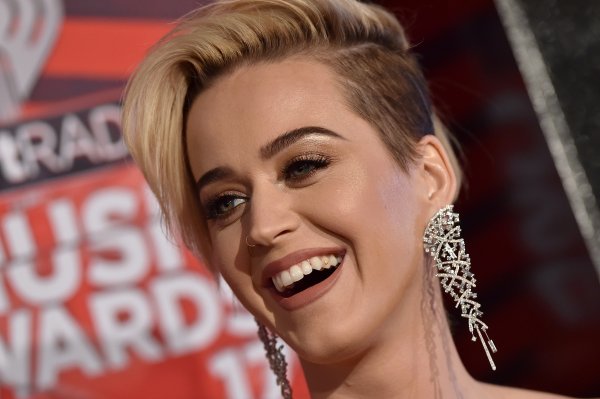 Katy Perry Is Officially Obsessed with Cherry Pies
Next Up: Editor's Pick