New Orleans Removes First of 4 Confederate Statues: ‘This Is Not About Politics’

New Orleans has begun removing statues that the city’s mayor said were erected to honor the “lost cause of the Confederacy.”

The first to go early Monday morning was the Battle of Liberty statue, an obelisk that was built to commemorate an insurrection led by a group of white citizens angered by the racially integrated Reconstruction government. Statues in honor of Confederate generals Robert E. Lee and P.G.T. Beauregard and the President of the Confederate States Jefferson Davis are also slated to be removed.

In a statement, New Orleans Mayor Mitch Landrieu said removing the statues sends a message that the city is inclusive and celebrates diversity.

“This is not about politics, blame or retaliation. This is not a naïve quest to solve all our problems at once,” Landrieu said. “This is about showing the whole world that we as a city and as a people are able to acknowledge, understand, reconcile — and most importantly — choose a better future.”

According to the Times-Picayune, the statues’ removal marks the end of a process Landrieu started two years ago to move the city’s Confederate memorials from public property. The initial call to action came in the wake of the Charleston church massacre; the shooter in those killings was a self-proclaimed white supremacist who proudly posed with Confederate symbols in photos. The mayor’s office says the statues will first be placed in storage and later moved to appropriate museums or other facilities.

There have been threats made against contractors involved in moving the statues, so the city will not publicize the dates of additional removals. The Times-Picayune reports construction workers on site early Monday wore masks to cover their faces. The name of the company they work for was also blacked out, according to the paper. 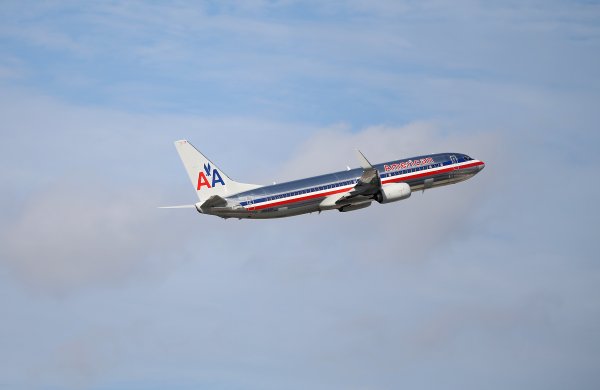 American Airlines Suspends Employee After Altercation
Next Up: Editor's Pick