Paul Ryan departs after speaking to the media after a Republican caucus meeting on Capitol Hill, on March 23, 2017, in Washington.
Alex Brandon—AP
By Philip Elliott

House Speaker Paul Ryan had a not-so-subtle message for the White House on Saturday: Don’t rush Congress to repeal Obamacare just because President Donald Trump wants a win before he hits his 100-day-in-power mark on Friday.

The Wisconsin Republican told fellow lawmakers on a weekend conference call that the GOP still plans to scrap President Barack Obama’s signature health care law. But the Speaker, still stung by the failed bid earlier this year, is not going to try again until he is certain there are sufficient votes for the entire deal—especially with a government shutdown looming at the end of the week.

The brush-off is a sign that Ryan may have tired of the antics from Trump’s team. With the current Congress seated for another 20 months, lawmakers can push back against Trump’s agenda if he tries to bully them into action before they’re ready. After all, separation of powers is more than an answer on a civics test.

The tension could come to a head during a critical week when Congress faces the difficult challenge of passing a funding measure to keep the government open. Some White House advisers believe the high-stakes deadline would give the repeal push a sense of urgency that the previous attempt lacked. A photo-finish bill signing late Friday, followed by a Saturday evening victory rally in Pennsylvania with the President, would make for good television—at the same hour the White House Correspondents Association has its annual black-tie dinner. Trump would love to steal the spotlight.

Yet Ryan, a steady Midwesterner, is not eager to have his chamber’s agenda scripted by a former reality television star. Lawmakers have just four days in Washington before government funding expires, bringing the vast federal bureaucracy to a screeching halt. And Ryan is aware that there remain serious questions whether the Republican Party—which controls the House, the Senate and the White House—can govern half as well as it obstructed during Obama’s term. A shutdown would tank Republicans’ image with voters, just as a 2013 partial shutdown did.

Ryan told colleagues that he expects defections from Republican ranks, meaning Democratic votes will be needed to pass the funding measure. That more or less ends dreams of using the bill as a vehicle for reductions in social spending, tax cuts that add to the deficit or federal dollars for a border wall with Mexico. The Speaker also knows any spending legislation the House sends to the Senate will require at least eight Democratic votes, and there is little appetite among the Democratic minority to sacrifice.

In a sign Ryan wasn’t looking to turn the unusual Saturday conference call into a strategizing session or debate, he did not open the call to questions from rank-and-file lawmakers. “Wherever we land will be a product the President can and will support,” Ryan told colleagues, according one top Republican staffer who listened to the call.

It’s not clear if top White House advisers understand these dynamics, or if the people who do have the President’s ear. At times last week, it seemed clear the President was calling the shots without input from his legislative staffers, who would have advised him against trying to cram so many heavy lifts into a week that already has Wall Street skittish.

Last week, senior administration officials told reporters that Congress would deal with health care on Wednesday, efforts on tax reform would follow later that day and then the massive spending bill would clear his desk. As part of his typical Saturday morning raft of tweets, Trump promised: “Big TAX REFORM AND TAX REDUCTION will be announced next Wednesday.”

Trump’s team seemed unsure how to respond. Homeland Security Secretary John Kelly told CNN for an interview that will air on Sunday’s State of the Union that Trump wanted to see border wall funding included. “I would suspect he will be insistent on the funding,” Kelly told Jake Tapper.

That matches the message from White House budget czar Mick Mulvaney, who said the administration needed to win federal dollars to fund the wall. “You cannot expect a president who just won election to give up very easily on his highest priority,” Mulvaney told Bloomberg on Friday.

Senior Republican aides were incredulous about those plans. But they were simultaneously waiting to see if Ryan would try to heed Trump’s wishes, as he did on round one of the health care repeal. During that prior push, Trump insisted on scheduling a vote, only to postpone it twice when it faced uncertain odds of passing. Ryan seems to have stood up to the White House for now. And for his part, Trump has subsequently backed off that demand.

Yet it remains to be seen if Trump will turn to Twitter—and his millions of active supporters—to attack Congress this week for its sluggish pace. The President was elected on the promise to upend Washington. A government shutdown inside the first 100 days would be one way to deliver. 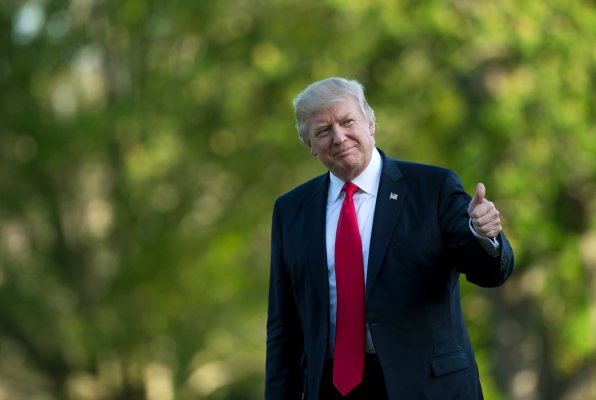 President Trump Didn't Always Think the First 100 Days Was A 'Ridiculous Standard'
Next Up: Editor's Pick