Questlove Speaks at March for Science: ‘We Need to Make Sure Science Belongs to the People’

Musician and multi-instrumentalist Questlove said science should belong to the masses at the March for Science in Washington, D.C., on Saturday.

Questlove, one of the event’s co-hosts, spoke about the importance of science and facts during the new presidential administration as thousands of scientists gathered at hundreds of cities around the world on Earth Day in light of new policies affecting their work.

“The rational scientific thought gets us out of the highest corners and to the most open, wide spaces,” he said.

Referring to President Donald Trump as “that guy over there,” Questlove said making science accessible to people is now more important than ever.

“Many people seem to be forgetting those facts and it’s been frustrating to watch as certain forces in our society try to squelch science or their refusal to believe in it or propose alternative realities and facts. Alternative facts or whatever that (bleep) is. All that works against science and we need to work for science. More than that, we need to make sure science belongs to the people.”

Science educator Bill Nye of Bill Nye the Science Guy and Mona Hanna-Attisha, the pediatrician responsible for exposing the water crisis in Flint, Mich., also spoke at the event in Washington, D.C., on Saturday.

Scientists have made their voices heard in light of Trump Administration policies affecting their work, including proposed budget cuts to the Environmental Protection Agency and the National Institutes of Health.

Trump has not yet commented on the protests.

Most Popular on TIME
1
Could Amsterdam's New Economic Theory Replace Capitalism?
2
My Parents Will Be Vaccinated Long Before Me. Can They Come Visit?
3
Biden Reinstates International Travel Restrictions 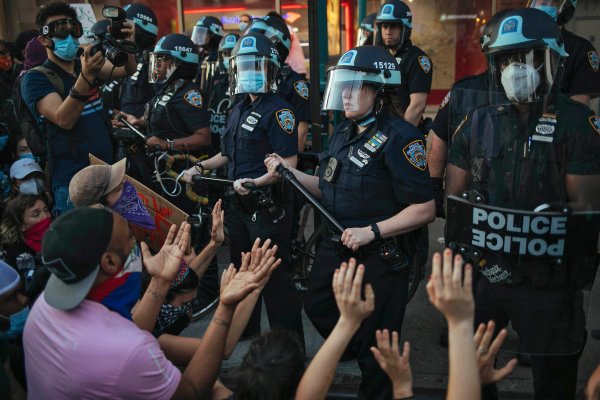