See Some of the Nerdiest Signs From the March For Science

One March for Science protester has a message for President Donald Trump: “Scientists invented your spray tan!”

Thousands of scientists gathered in Washington, D.C., and around the world to celebrate science in light of Trump Administration policies targeting their work — including proposed budget cuts to the Environmental Protection Agency and National Institutes of Health.

And the scientists certainly did not disappoint with their posters. One read “Shrodinger’s cat grabs back,” alluding to both the thought experiment described as a paradox and the slogan used by Women’s March protesters in January.

Another cleverly combined the symbols of the periodic table elements Tungsten, Thorium and Fluorine — W Th F — to create “the element of outraged disbelief.”

And one protester’s sign gave a new definition for White House adviser Kellyanne Conway’s “alternative facts”: the square root of negative 1 — or, imaginary.

Check out some of the nerdiest signs from the March for Science in Washington, D.C., in the photos below. 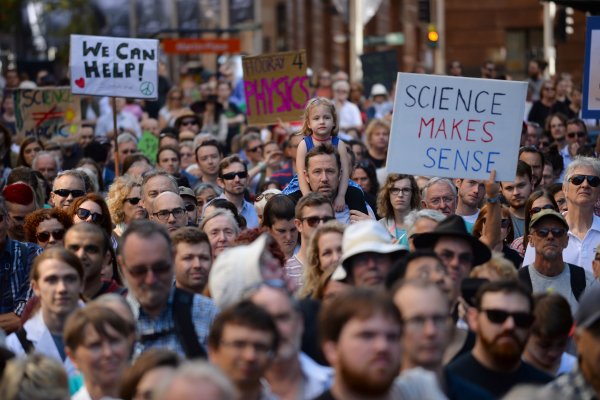 Watch Live: March For Science Protesters Rally in D.C.
Next Up: Editor's Pick