When I was 33 years old and exhausted from working two jobs, my husband told me that the local electric company was accepting applicants into its lineman apprenticeship program. As a strictly non-cubicle girl who grew up working on the family farm, I was jazzed by the idea of working outdoors and scaling tall power poles. But the road to join the ranks of the few, the mighty, the female lineworker would challenge me to my core.

I nailed the aptitude test, which was mostly math, geometry and mechanical questions. But I failed the field assessment test, which involved driving a 3-inch bolt into a wooden pole with a hammer, drilling a hole in the pole with a brace and bit, then digging a 3-foot hole in the ground in under 10 minutes. Among a crew of male applicants, I was the only woman — and I finished dead last.

But I really wanted that job. So I trained for an entire year, working on an exercise routine to improve my endurance, agility and strength. And when they were hiring again, I went back and mastered that field skills test. Today, I’m one of 15 women out of 2,411 lineworkers at my company.

I love how every day on the job is different. Tomorrow I could be working on high-voltage power lines, climbing an 85-foot pole carrying 35 pounds of gear. Or I could be on my belly fixing underground transformers, or on a ladder repairing a home’s rooftop connections. It’s a challenging job for anyone — but as one of the more petite lineworkers, I have to push myself even harder just to reach out to work on the wires or even grab what I need off the top of the truck’s tool shelves.

Occasionally, being a woman in a job primarily held by men gives me some advantages. My size can sometimes work in my favor, because it’s easier for me to maneuver into some spaces where the big guys can’t fit. Sometimes customers approach me a little more gently, perhaps because they aren’t intimidated. Of course, there’s a flip side. More times than I can count, I’ve been asked by male customers when the men are going to arrive to fix the power. I always just smile and say, “Well, there are no men coming. But I’m here. Would you like me to fix your power?” Funny enough, they always seem to say yes.

It can be intimidating to be the only woman in your workplace. When I first started in the job, I was mentored by another female lineworker. She told me, “Stop thinking of yourself as the only girl in an all-guy’s world. Think of yourself as a lineman. We’re all linemen, and we’re all the same.” I’ve come around to that point of view, too — in fact, I’d rather be referred to as the more common “lineman” than “lineperson,” and am a proud member of the International Brotherhood of Electrical Workers union. I’m no different from my co-workers. Men or women, we’re all professionals working hard to do a good job while staying safe. And hearing kids cheer from an upstairs window when we turn the lights back on at night makes it all worth it.

As long as she’s given the proper tools, training and opportunity, a woman can do any job a man can do. That’s not even a question. Yes, sometimes we have to be more resourceful and creative to get there, but once we’re there, we shine. So, here’s my advice to any woman trying to break into a male-dominated field: Do your research, then go for it with all you have.

Suzy Macke is a lineman at Duke Energy in Hamlet, Ohio. 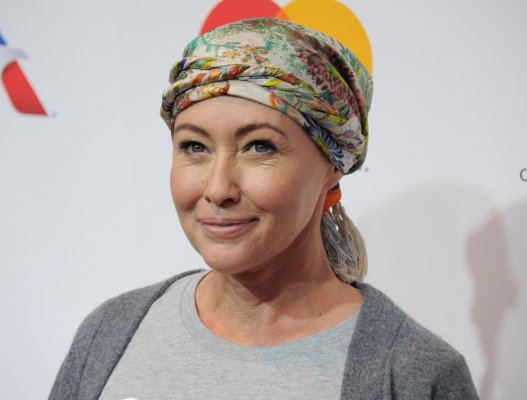 Shannen Doherty Says She Is in Remission: ‘I Am Blessed’
Next Up: Editor's Pick