In London, French Expats Rally for Presidential Picks Across the Channel

It’s just a few days before the French vote in the first round of their pivotal presidential elections, and three hundred people are packed into a lecture hall to show support for front-runner Emmanuel Macron. “Our movement is like no other before it,” Ygal El Harrar tells the crowd, to applause.

It’s the kind of scene taking place across France — but in fact this event took place a hundred or so miles north in London’s Westminster University, on April 18. The mainly expat crowd made up just a tiny percentage of the estimated 300,000 French citizens in London, a number that makes the famous but possibly apocryphal claim that Britain’s capital is the sixth-largest French city by population.

The first round of voting is being held on Sunday, April 23, and the Financial Times‘ polls of polls are showing the top two candidates, pro-European Macron and far-right National Front leader Le Pen, within two percent of each other. France Unbowed’s Jean-Luc Melenchon and Les Republicans’ Francois Fillon are just three percent behind, each on 19%. The closeness of the race means French expatriates—who number some 1.3 million—could be a deciding factor in which of the four leading candidates will secure the two places in the second round of voting on May 7.

Among London’s cosmopolitan French community, Macron is surely the favorite. A March 31 poll found that the pro-E.U. candidate has a lead among French nationals living abroad, globally: 36% would vote for Macron and 33% would go for right-wing Fillon, while Le Pen is at 9% and far-left Melenchon with 8%.

El Harrar, who is an equity broker at French company, is upbeat about his candidate’s chances. He describes the former Socialist economy minister as a candidate who has crossed the traditional right and left political spectrum. This is illustrated by the range of supporters present at Westminster University: Corporate ‘city-types,’ families with children, French Muslim voters and students.

“We are in the middle of a massive revolution in the French political system,” El Harrar, who says he’s a personal friend of Macron, tells TIME before Tuesday’s campaign event. “Macron has emerged as one of the key leaders by basically showing that…we can favor the corporates while also favoring the employees, we can favor freedom and favor fraternity, we can favor liberalism but also favor the protection of the individual,” he says.

Rola Hageali, 36, a French lawyer who has worked in London for three years, tells TIME on the sidelines of the event that she would vote for Macron because “he proposes things that speaks to me” which include his pledge to move into renewable energy, his pro-E.U. stance as well as “the support of globalization and the need to reduce economic disparities” she says.

Macron’s campaign clearly sees London as a potentially important constituency; under El Harrar’s watch, campaigners have leafleted 100,o00 doors, have a presence in almost every university in Britain, and drew more than 3,000 French expats to Macron’s Feb. 21 rally in London. The biggest issue for them is Brexit, explains El Harrar, noting that since the June 23 vote up to 30% of E.U. nationals in the U.K. have had their applications for permanent residency rejected.

The solution, he thinks, will be Macron’s proposed economic reforms in France; of fiscal restraint, more public spending and de-regulation. French white collar workers flock to London for higher-paying jobs with lower tax burdens but under the young centrist that may change. “We want to reform France to make it ready to attract both French people and non-French,” El Harrar says.

Le Pen’s campaign in the U.K. stands in stark contrast to Macron’s well-oiled London machine. The far-right leader has never held a rally in the U.K. and monthly London events held by the National Front’s U.K. representatives typically attract just a couple of dozen participants. Still, Le Pen’s lead campaigner in the city, Max Begon-Lours, says his enthusiasm is undimmed.

The 30-year-old financial trader talks glowingly of the far-right populist’s calls for economic protectionism, tough immigration controls and opposition to the E.U. “The French governments, on the right and left, have been big supporters of unrestricted free trade which puts French workers in competition with China” Begon-Lours tells TIME from a conference room at his workplace. “Which means we are losing jobs to people working for cheap in worse social conditions” he says.

The loss of French identity and immigration are two of his chief concerns and the key reasons why he dislikes Macron and Fillon, the race’s other conservative candidate. Begon-Lours says even though Fillon has co-opted the language of the far-right when it comes immigrants, “I don’t think I can trust him to achieve what he claims to achieve” he says, while deploring Macron’s “convergence of French identity into a European identity.”

Le Pen’s controversial stance on immigration doesn’t trouble these immigrants. Fabien, a freelance journalist who has lived in the U.K. for 17 years and asked his last name not be published for fear of professional reprisals, tells TIME he believes her policies are rooted in patriotism. “Marine Le Pen is not a racist, she does not want all the immigrants out, she just wants the bad immigrants out” he says.

Neither of these men fear being repatriated when Britain leaves the European Union and attempts to limit immigration. “I’m not worried because France and England have been allies for more than a 100 years, and even if England is out of E.U. I don’t see them asking qualified French people to leave” Begon-Lours tells TIME.

They may be part of a small minority of Britain’s French expatriates voting for Le Pen, but Thursday’s attack, that appeared to be an act of terrorism in Paris’s Champs-Elysees, has only reinforced their beliefs. “Terrorist attacks, they confirm my vote for Marine le Pen because I think she is the only one who can put France back into order” Fabien says.

Britain too has an election coming up, following Prime Minister Theresa May’s shock announcement on Tuesday, but some politicians here are deeply invested in what happens across the English Channel. At Monday’s rally, former Deputy Prime Minister Nick Clegg showed up to lend support to his fellow Europhile Macron. “I think Emmanuel Macron could be pivotal in Europe’s history” Clegg, a noted polyglot, said in note-perfect French. “He can push through the reforms we need.” 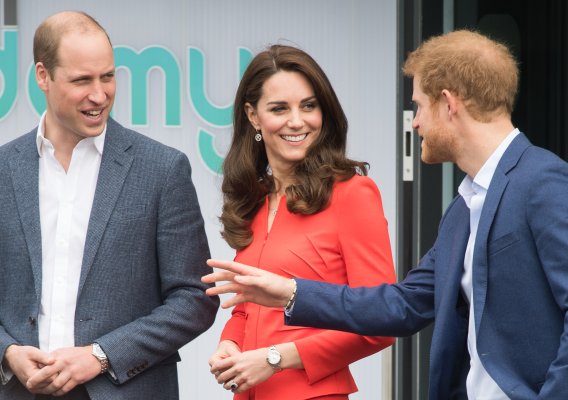 Watch Princes William and Harry Talk to Kate About Losing Their Mom
Next Up: Editor's Pick