US President Donald Trump makes his way to board Marine One on the South Lawn of the White House on April 18, 2017 in Washington, DC, enroute to Milwaukee, Wis.
MANDEL NGAN—AFP/Getty Images
By Massimo Calabresi

On Tuesday, the Trump Administration did something surprising: it embraced Barack Obama’s Iran nuclear deal, in writing, to Congress. If you didn’t notice, that is likely because another surprising Iran-related thing happened the next day: Secretary of State Rex Tillerson provided some fairly adept political cover for Trump’s sudden shift with a raft of well-crafted and purpose-built diplomatic language.

This was, to be clear, the full-twisting Tsukahara of Trump’s recent foreign policy flip-flops. Trump has repeatedly called the Iran deal the worst ever, and swore to tear it up immediately on entering office. In fact, Trump could have killed the deal this week just by doing nothing. With a set of Congressionally-required 90-day certifications expiring, Trump could have said he was unable to guarantee Iran was complying with the deal and it would have started to collapse on its own.

Instead, Tillerson, acting as Trump’s delegated agent, on Tuesday sent a letter to House Speaker Paul Ryan declaring that Iran was complying with U.N. requirements to constrain its nuclear program. Not that he wanted anyone to notice. The operative part of his note is indecipherable to an average reader: “This letter certifies that the conditions of Section 135(d)(6) of the Atomic Energy Act of 1954 (AEA), as amended, including as amended by the Iran Nuclear Agreement Review Act of 2015 (Public Law 114-17), enacted May 22, 2015, are met as of April 18, 2017.”

Tillerson was decidedly less opaque on Wednesday at a very brief press availability in the ornate Treaty Room at the State Department. “Today I’d like to address Iran’s alarming and ongoing provocations that export terror and violence, destabilizing more than one country at a time,” Tillerson said. He proceeded to lay out a long list of bad things Iran is doing, from sponsoring terrorism to oppressing its own people to violating U.N. constraints on its missile program. When it came to the nuclear deal, he said it failed to ensure Iran won’t become a nuclear state in the future and said the administration was conducting a “comprehensive review of our Iran policy.”

The truth is the Trump Administration is boxed in. Most of the important concessions the world made to Iran have already kicked in, including opening up of Iran for outside business and returning tens of billions of dollars in frozen assets. Trashing the deal now would allow Iran to restart its nuclear program, while leaving Tehran holding most or all of the goodies that were offered as enticement to suspend it.

Trump hardly needs the headache of another foreign policy mess. He has a full-blown nuclear crisis already on the front burner with North Korea. His position on Syria is under stress after his punitive air strikes there earlier this month. And whatever its flaws, the Iran deal is keeping Tehran’s nuclear ambitions in check—Trump himself just certified that fact, as have the international inspectors charged with monitoring the deal.

“Without the certification that was provided,” says Richard Nephew a sanctions expert at Columbia University who helped negotiate the Iran deal, “It would have prompted a crisis between the U.S. and the rest of the countries who signed the deal,” namely Russia, China, Britain, Germany, France and Iran.

Trump, ironically, has Congressional Republicans to blame for his dilemma. Back in 2015 the GOP only agreed to let the Iran deal go forward after imposing strict requirements on President Obama in an effort to tie his hands. Every 90 days the president must certify Iran is complying with the deal. Every 120 days he must affirmatively waive oil-related sanctions on the country. And every 180 days, he must waive all the other sanctions that were imposed over the better part of a decade to punish Iran for its pursuit of nukes. If not, the U.S. will begin reimposing sanctions on Iran almost automatically. That would violate U.S. commitments under the deal. That in turn would free Iran to restart its program with the diplomatic high ground.

To his credit, Tillerson managed to get Trump past the first of those regular requirements with hardly anyone noticing. Much of the news coverage focused on his tough talk about Iran, not on the fact that the Administration had taken its first affirmative steps to uphold the deal. In that sense, Tillerson was giving other, less talented verbal acrobats in the administration a lesson in how to flip-flop, a vital skill for any public figure in Washington.

Now he just has to do it again, and again, multiple times a year. The next routine will come in mid-May, and another will follow in July. In his letter to Ryan Tuesday, Tillerson said that the White House, in its ongoing review of Iran policy, will be evaluating whether “suspension of sanctions related to Iran pursuant to the [nuclear deal] is vital to the national security interests of the United States.” Perhaps after that review Trump will decide to abandon the Iran deal and unleash yet another global crisis. If not, he and Tillerson will be getting plenty of practice at diplomatic gymnastics in the months ahead. 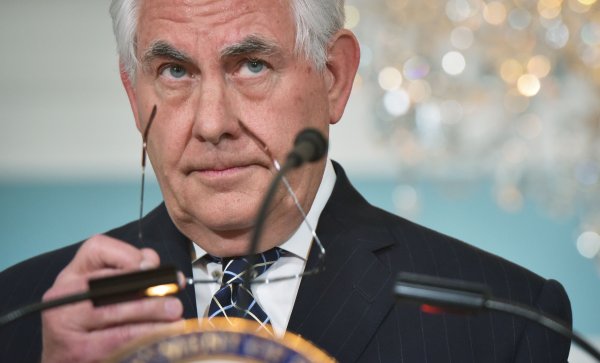