What to Know About the Champs-Elysees Shooting in Paris

By Alana Abramson and Aric Jenkins

A shooting on Paris’ Champs-Elysees Thursday night left one police officer dead, along with the suspected shooter. Two other officers were injured, as was a female tourist. The violence occurred at one of the world’s most renowned boulevards, just three days before France’s presidential election.

The Islamic State of Iraq and Greater Syria claimed responsibility for the attack, and the actual identity of the attacker has been verified, according to the Associated Press. The attacker, who was shot by police, is thought to have been a 39 year-old from a Paris suburb; searches are underway for possible accomplices and evidence.

French President François Hollande said before ISIS took responsibility that the circumstances of the shooting indicate a terrorist attack.

Around 9 p.m. Paris time (3 p.m. Eastern) gunshots were heard around a Marks & Spencer store on Champs-Elysees in central Paris, prompting passersby and tourists to flee the area in panic. The attacker came out of a car, and, using an automatic weapon, began shooting police officers. Three police officers were hit, according to Reuters, one of whom was killed. Although initial reports said two officers were shot dead, a spokesman for the French Interior Ministry said the second policeman had not actually died of his wounds as initially reported.

This is the third terrorist attack the city of Paris has endured in two years. France has been in a state of emergency since 2015 in the wake of numerous terrorist attacks that have killed over 200 people.

Who fired the shots?

One attacker fired the shots with a machine gun and was subsequently killed by law enforcement. Paris prosecutors detained three of his family members for questioning. He has been identified as a 39-year-old man from an eastern Paris suburb, though police have not yet released his name. On Friday, French officials told the AP that he was detained in February for threatening police, then freed due to lack of evidence. He was also convicted in 2003 of attempted homicide in shootings on two police officers.

A second man, suspected of being linked to the shooting, surrendered himself in Belgium, but authorities later said there was no link. A prosecutor in Belgium’s Antwerp told the AP: “That man came to police late yesterday after he saw himself appear on social media as terror suspect No. 1 relating to yesterday’s facts,” adding: “He was not part of a terrorism investigation.”

ISIS has claimed responsibility for the attack, but even before that, French President Francois Hollande said the circumstances of the attack likely indicate terrorism, the AP reports. The suspect was reportedly given a pseudonym by ISIS, Abu Yusuf al-Beljiki, which may mean he has a connection to Belgium.

U.S. President Donald Trump suggested terrorism as motivation, before Hollande’s remarks. “It’s a terrible thing…it looks like another terrorist attack. What can you say. It never ends,” he said at a press conference on Thursday.

Is the area closed?

Champs-Elysees was closed off immediately following the attack. Paris’ metro subway is not stopping at stations near the area for the time being.

Many world leaders widely condemned the attack and passed on their condolences to President Hollande. Downing Street released a statement saying the U.K. “strongly condemns the appalling terrorist attack in Paris,” while German Chancellor Angela Merkel said her country would remain “strong and determined” alongside France.

Mariano Rajoy, Spain’s Prime Minister, described the incident as a “heinous attack” on Twitter, adding: “the pain caused only manages to strengthen our unity in defense of peace and freedom.”

Speaking in Indonesia, the U.S.’ Vice President Mike Pence said the attack was just the latest reminder “that terrorism can strike anywhere at anytime.” “We have to be strong, and we have to be vigilant,” he added, quoting President Trump, CNN reports.

How will this affect the election?

The shooting occurred during a prime time television debate between all 11 official candidates, just three days before the first stage of the country’s general election.

Candidates Emmanuel Macron, Francois Fillon and Marine Le Pen called off their campaigning events on Friday, the BBC reports. In response to the incident, the far-right Le Pen tweeted: “Once again, it was our policemen who were targeted and paid the price of blood in the fight against Islamism.”

Speaking after an emergency security cabinet meeting, French Prime Minister Bernard Cazeneuve said security forces were on top alert for Sunday’s election. “The Government is fully mobilised,” he said in a statement, ABC reports. “Nothing must be allowed to impede the fundamental democratic process of our country. It falls to us not to give in to fear and intimidation and manipulation which would play into the hands of the enemy.”

According to the AP, more than 50,000 police and gendarmes are mobilized to protect Sunday’s first-round vote, with an additional 7,000 soldiers also on patrol. 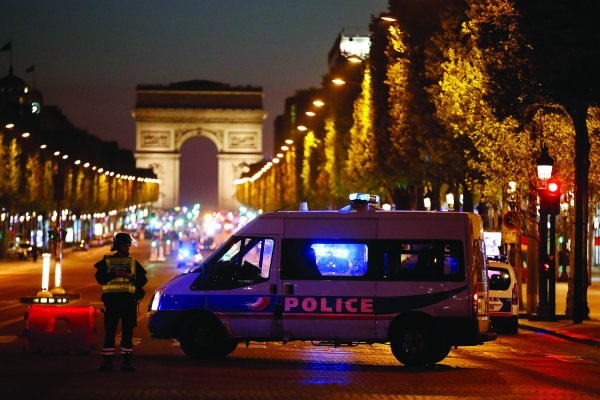