Why Scientists Are Joining the March for Science

By Alexandra Sifferlin and Justin Worland

Traditionally, scientists shirk political debate, preferring to stay out of the partisan fray. But in the months since the 2016 election, many in the scientific community have been vocal about their concerns that the Trump Administration is making decisions and budgetary recommendations that could imperil their work. For instance, a $5.8 billion proposed cut to the National Institutes of Health budget, which funds scientific research in the U.S.

Now, thousands of scientists and their supporters are expected to join the March for Science in Washington, D.C., and hundreds more are expected at satellite events around the country including New York City, Chicago, Birmingham, Alabama and more.

“Scientists are often reticent to go public,” Rush Holt, a former member of Congress and CEO of the American Association for the Advancement of Science said in a Wednesday press conference about the march. “In this case, the level of anxiety about the state of science, it’s place in our society and in our government, and whether the conditions under which it can thrive are being adequately maintained and defended, has led people to go into the public square in what appear to be unusually large numbers and unusually great enthusiasm.”

The main march in Washington will feature speakers including Mona Hanna-Attisha, the pediatrician who blew the whistle on the water crisis in Flint, Mich., science educator Bill Nye, as well as hosts and performers like Questlove from the Roots. The event begins with a rally at 9 a.m. Eastern followed by the march. Organizers expect more than 500 other marches to take place around the world.

Many prominent science groups have endorsed the march, including AAAS, the American Chemical Society and the American Geophysical Union. The leading scientific journal Nature also recently published a supportive editorial, writing, “We encourage readers to get involved, to show solidarity and to speak out about the importance of research and evidence.”

MORE: 3 Easy Ways to Make a Difference on Earth Day

Through March for Science organizers have framed the march as a “celebration of science” and a nonpartisan opportunity to defend the role science plays in the global community, the organizers acknowledge that the march is spurring debate over the role of politics in science. “The march has generated a great deal of conversation around whether or not scientists should involve themselves in politics,” the group writes. “In the face of an alarming trend toward discrediting scientific consensus and restricting scientific discovery, we might ask instead: can we afford not to speak out in its defense?”

The reasons for marching vary among scientists and other participants, from concerns about the future of the Environmental Protection Agency amid a 31% proposed budget cut, to potentially fewer funding opportunities from the National Institutes of Health, to the Trump Administration’s position on climate change, and more.

President Trump’s proposed 18% budget cut to the NIH is top of mind for many scientists participating in the march. Carol Greider, a professor of molecular biology at Johns Hopkins University and a Nobel Laureate in Medicine said during the AAAS press conference that a nearly 20% cut to the NIH budget will mean no new grants for young scientists: “Without the support of the NIH, we will lose this next generation of scientists and the next wave of breakthroughs and therapies.”

Bryan Jones, a retinal neuroscientist at the Moran Eye Center at University of Utah School of Medicine traveled to D.C. to march with fellow vision scientists on Saturday to speak out against the NIH budget proposal. “If that cut goes into effect, it will devastating,” says Jones. “We are already seeing labs shutting down. Blindness research, Alzheimer’s research, Parkinson’s research, cancer research, diabetes research—all of this is funded through the NIH.”

Climate scientists will also be showing up to the march citing concerns about the proposed 31% budget cut to the EPA, including complete defunding of many climate programs, including former President Obama’s Clean Power Plan, which would require states to implement plans to transition away from coal-fired power plants. Even without those cuts, which many policy experts expect Congress will not approve, climate scientists worry their work will fall on deaf ears or worse that the government will try to block them from discussing their findings.

“There’s definitely reason to be quite alarmed that the direction government research will go away from documenting climate change,” says Ken Kimmell, president of the Union of Concerned Scientists, a partner in the March for Science. “If government scientists aren’t free to speak about their work we risk further exacerbating the declining public trust.”

Rachael Bonoan, a biology Ph.D. candidate at Tufts University, says she hopes the march will make scientists more visible and relatable to the public. “Science tends to be viewed as an exclusive club for the geeks, the nerds, the people who are smart enough, but that view just isn’t the whole truth,” she says. “A child asking questions about the world is science, baking a cake is science. I see an opportunity to expand the public’s perception.” Bonoan will be giving a lecture on honey bees at a museum in Massachusetts during the march, but will be wearing a March for Science t-shirt in solidarity.

Some scientists will sit out the march, arguing it will be counter-productive. “A march by scientists, while well intentioned, will serve only to trivialize and politicize the science we care so much about, turn scientists into another group caught up in the culture wars and further drive the wedge between scientists and a certain segment of the American electorate,” wrote Robert S. Young, a professor of coastal geology at Western Carolina University in a January New York Times editorial.

Other scientists argue the state of affairs has given them no choice but to get involved. Jones, the vision scientist, acknowledges that becoming a political advocate is not easy for himself or his colleagues. “Science is not partisan and most scientists I know are not interested in politics—they just want to do their jobs,” he says. “But we are realizing that we are in crisis mode and it’s time to speak up and come out of our labs and educate the public.” 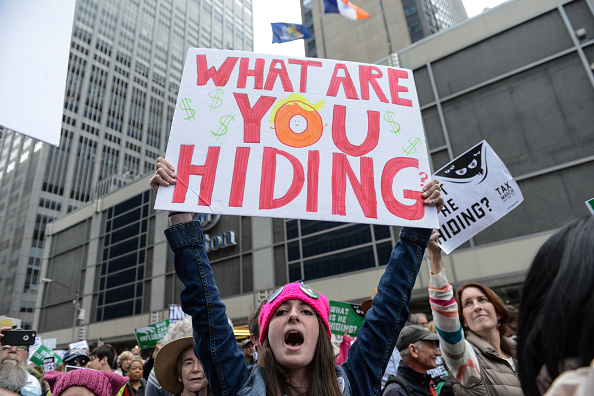 How the Tax March Echoed the 2009 Tea Party Rallies
Next Up: Editor's Pick