Goodall, of course, is best known for the decades she spent studying the chimpanzees of Gombe, bringing the world a much deeper understanding of homo sapiens’ closest genetic kin and raising awareness of African wildlife in general. But her body of work is far deeper and broader than that.

She is the founder of the conservation group The Jane Goodall Institute, as well as Roots & Shoots, a youth service program that started with 12 high school students in Tanzania in 1991 and now includes 150,000 youth groups in 98 countries. She is the author of 30 books, an official United Nations Messenger of Peace, and, most recently, a Nature Ambassador for the Disney Corporation. If that last designation seems to carry less gravitas than her U.N. title, it may actually carry more influence.

That, at least, is what Disney hopes and what Goodall herself is helping to make happen, with her work promoting the new Disney film Born in China, directed by Lu Chuan, narrated by John Krasinski and set to open in theaters on April 19, three days before Earth Day. The film, with a brisk runtime of 76 minutes, follows the lives of three animal families in the wilds of China: a group of snow leopards, golden snub-nosed monkeys, and — inevitably but irresistibly — pandas.

Disney yields to no one in knowing precisely how to master the balance of drama, cuteness and mortal stakes necessary to make any nature film land, and Chuan’s work does not disappoint here — with its rich cinematography and narrative arc. Goodall will be only too happy if the film works its familiar family magic and Disney has a hit, but she’s playing for bigger stakes, too.

“These movies follow individual animals over time, and we get to know them and their personalities,” she says. “It’s not manipulating what animals do; it’s being patient and letting the animals show you what they do. And this message gets into people’s hearts.”

It’s through the heart, Goodall has long believed, that people gain a true appreciation for the one planet we’ve got and our abiding responsibility to be better stewards of it. Children are usually the first to tumble to that kind of nature love, but adults are hardly lost causes.

It is life, ultimately, and the job of protecting it on Earth — the one place in the cosmos we know that can support it — that moves Goodall most.

“We send a rocket to Mars, a little robot creeps out and it takes pictures,” she muses. “It’s mind-blowing. We’re clearly the most intellectual creature that ever walked on the planet. But the photos from Mars prove that we don’t want to live there, and we certainly don’t want to live on the barren moonscape. So, we’ve got this one chance.”

It’s a chance that Goodall has devoted her life to ensuring that we don’t waste. 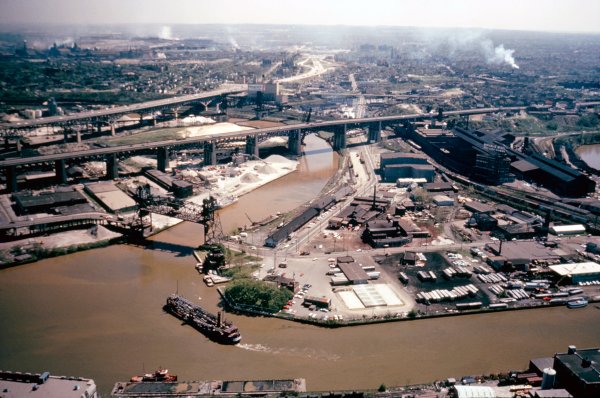 Disturbing Photographs Show Pollution in the Great Lakes Before the Clean Water Act
Next Up: Editor's Pick