3 Easy Ways to Make a Difference on Earth Day

The daunting challenges facing the planet — from man-made climate change to rapidly declining biodiversity — may make you feel like giving up. But everyday citizens can make a difference, and it’s not just the simple fixes you’ve heard about like turning off the lights, reducing water waste and driving less.

Just in time for Earth Day on April 22, here are three ways you may not have realized can make a big dent fast.

Federal policymakers at government groups like the Environmental Protection Agency (EPA) are required to have a notice and comment period as they craft new environmental regulations. Anyone can comment via regulations.gov, and these comments can make a big difference in the way policies are shaped. This is an especially timely moment, as many key environmental rules like the Clean Power Plan and the Waters of the U.S. rule are being reevaluated and could be weakened or eliminated entirely — a fact both sides of the climate change debate are using to mobilize their followers. While one comment may not change a policy’s direction, regulators are required to provide a written response.

Agriculture, forestry and related land uses contribute 24% of the country’s climate change-causing greenhouse emissions, according to the EPA, and animal agriculture contributes a significant portion of that. Research published last year from Oxford University found that simply adhering to dietary recommendations — scientists say 5 to 6 ounces of protein a day is a healthy level of consumption — would reduce global food-related emissions by a third by 2050. Widespread adoption of vegetarianism would slash emissions by nearly two-thirds, according to the research.

Replacing old windows, turning off lights and slowing water waste tend to get the most attention as ways to make your home more efficient, but sealing leaks can make a more significant difference much faster. The Department of Energy estimates that the average American spends $2,000 annually on energy bills, and $200 to $400 of that total is wasted as a result of leaks. And that makes a big difference when applied to the entire U.S. The simple solution is to search for holes and crevices around the house allow conditioned air — warm air in the winter and cold in the summer — to seep out and air from the outside to enter. Caulking and weather stripping crevices is a simple approach to the problem. Sealing the edges of ducts — the tubes that allow air to flow for heating and cooling — is also a valuable target for a conscientious homeowner. And all of these steps have the potential to save you money, too. 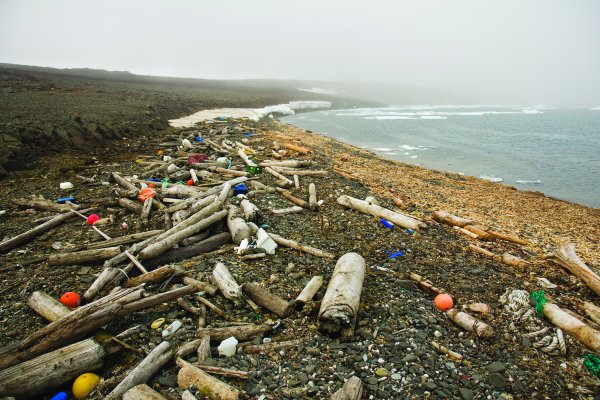 How Trash Polluted the Arctic Even Though Few People Live There
Next Up: Editor's Pick