President Trump Wants to Meet Pope Francis. The Two Have Clashed in the Past

President Trump wants to meet Pope Francis when he visits Europe next month. But the two world leaders have clashed in the past.

“Obviously, we’d be honored to have an audience with His Holiness,” White House Press Secretary Sean Spicer told reporters at Wednesday’s press briefing. In response, Archbishop Angelo Becciu told the Italian news agency ANSA that “Pope Francis is always ready to receive heads of state who request an audience.”

But should they meet, the détente would come just a little more than a year after Pope Francis made remarks that some took as targeted at Trump, leading Trump to fire back at him.

The feud began in February 2016, when Pope Francis planned to make a trip to pray with migrants along the U.S. border with Mexico. Then-presidential candidate Trump implied Mexico was using Pope Francis as a pawn and said, “I think that the pope is a very political person,” the New York Times reports.

Pope Francis fired back days later aboard his papal plane returning from Mexico, in response to a question about Trump’s plan to build a border wall and deport undocumented immigrants.

“A person who thinks only about building walls, wherever they may be, and not building bridges, is not Christian,” Francis said. On Trump’s accusation about him being “political” with Mexico, he said, “Aristotle defined human person as ‘animal politicus.’ So at least I am human person.”

And on whether American Catholics should vote for Trump, he said, “I say only that this man is not Christian if he has said things like that. We must see if he said things in that way and in this I give the benefit of the doubt.”

Trump immediately criticized the head of the Catholic church as “disgraceful.” He said in a statement he was “proud to be a Christian” and that he “will not allow Christianity to be consistently attacked and weakened.”

“If and when the Vatican is attacked by ISIS, which as everyone knows is ISIS’s ultimate trophy, I can promise you that the Pope would have only wished and prayed that Donald Trump would have been President because this would not have happened,” Trump said.

Since this back-and-forth, Pope Francis has made broader comments condemning populism that seem to have been directed at Trump’s political career. In January 2017 around Trump’s inauguration, Pope Francis was asked by Spanish newspaper El Pais if he was concerned about rising populism in the U.S. and Europe. “Crises provoke fear, alarm. In my opinion, the most obvious example of European populism is Germany in 1933,” he responded, BBC reports. “Germans vote for Hitler. Hitler didn’t steal the power, his people voted for him, and then he destroyed his people.”

But Pope Francis said it was too early to tell about how the new U.S. president would lead. “We’ll see what Trump does,” he said.

Already, the Vatican has urged Trump to change course on dismantling President Obama’s climate change policies. “Fortunately, in the United States, there are dissenting voices, people who are against Trump’s positions,” Cardinal Peter Turkson, who works on environmental, immigration and development for Pope Francis, said in March 2017, Reuters reports. “This, for us, is a sign that little by little, other positions and political voices will emerge and so we hope that Trump himself will reconsider some of his decisions.”

While Trump and Pope Francis would enter a meeting with this tense backdrop and widely divergent views on immigration and climate change, there could be hope for their relationship, and maybe some common ground. In 2013, the year Francis became Pope, Trump tweeted, “The new Pope is a humble man, very much like me, which probably explains why I like him so much!” 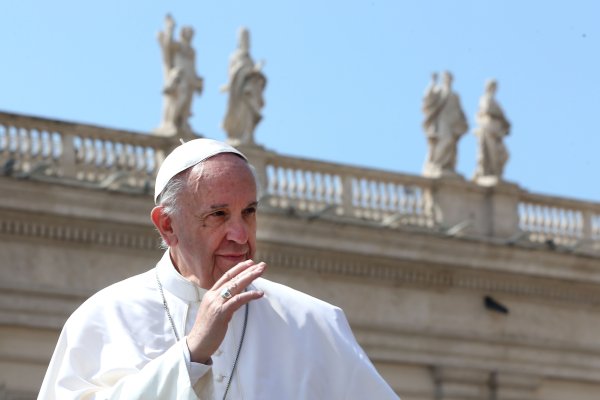 Trump Wants to Meet Pope Francis When He Visits Europe
Next Up: Editor's Pick