A Chechen woman at a refugee camp in the village of Debak, near Warsaw, on Jan. 16, 2008.
Wojtek Radwanski—AFP/Getty Images
By Feliz Solomon

Poland’s government is pursuing immigration reforms that would see asylum seekers kept in fenced-off border camps where they would be housed in shipping containers in the event of a major influx.

Politico reports that the ruling Law and Justice (PiS) party aims to “prevent efforts to illegally move to Western Europe” if a new migrant crisis erupts. Interior Minister Mariusz Błaszczak told Polish radio the country needs to “be ready” to prevent what it calls illegal entry, likening the plan to “similar container camps in France and Germany.”

The proposal, similar to a controversial policy in Hungary, would allow border guards to detain asylum seekers for four weeks while applications are being processed. It would also approve regulations for life in the camps, including the use of converted shipping containers as temporary shelter.

Read More: Refugee Children Face Beatings and Subzero Temperatures as They Are Pushed Back Into Serbia

Though the country did not bear the brunt of the 2015 European migrant crisis, Poland has seen a recent rise in anti-foreign, particularly anti-Muslim attitudes. According to Politico, the Polish Border Guard recently tweeted — and swiftly deleted — the message that: “We do not agree to the influx of Muslim migrants.”

Ruling party leader Jarosław Kaczyński reportedly ratcheted up anti-migrant rhetoric in the lead-up to the country’s 2015 election, claiming that migrants carry “very dangerous diseases,” Politico reports. After winning the majority, the PiS government backed out of an agreement to resettle about 7,000 asylum seekers in Poland.

Most of the asylum seekers entering Poland are Chechens fleeing political persecution under Russian ally Ramzan Kadyrov, entering the country through its border with Belarus and likely en route to Germany. The Polish Border Guard denied entry to some 80,000 people last year. Human Rights Watch has claimed that Polish authorities have defied international conventions by turning them away without allowing them to apply for asylum. 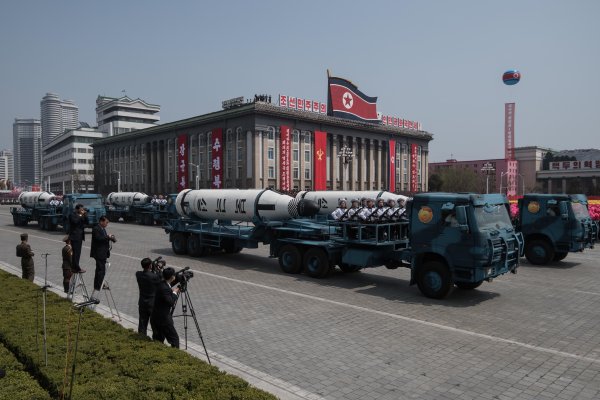 North Korea Sounds a Warning as U.S. Plans Next Move
Next Up: Editor's Pick