Here's How Alien: Covenant Fits Into the Overall Alien Timeline

The 2012 Alien prequel Prometheus left audiences with more questions than answers about the origin story of the viscious creatures that Ellen Ripley (Sigourney Weaver) battled in the original franchise. Alien: Covenant, out on May 19, offers an origin story of sorts, finally answering some of fans’ biggest questions and connecting Prometheus with director Ridley Scott’s 1979 original.

Covenant‘s premise: Shortly after the disappearance of the Prometheus expedition, the crew of a colonizing expedition stumbles upon a mysterious signal and decides to investigate. Here’s how it fits into the timeline of the Alien films, no spoilers.

Two archeologists, Elizabeth Shaw (Noomi Rapace) and Charlie Holloway (Logan Marshall-Green), find a “star map” that they interpret as an invitation from the aliens who created humanity, “Engineers.” Peter Weyland (Guy Pearce), the elderly CEO of Weyland Corporation, funds their expedition to hunt down our galactic ancestors. They set out on the Prometheus with a crew that includes an android named David (Michael Fassbender) but find more than they bargained for when they arrive at the mapped-out planet.

Crew members on a colonizing expedition on the ship Covenant (Katherine Waterston, Billy Crudup, Danny McBride and Michael Fassbender as another android among them) stumble upon what appears to be a message from Shaw and follow it to a planet inhabited by unfriendly creatures.

After the release of Prometheus, Ridley Scott said that there would be at least three more prequels to the original Alien, including Covenant. He called them “origin stories” that would answer “basic questions” about the Alien universe. He has reportedly already written the sequel to Covenant.

The original film: A distress signal wakes the crew of the ship Nostromo from stasis. They fly to a planet to investigate only to encounter an alien creature that is able to mate with one of the humans. The resulting alien hybrid attempts to take them out one-by-one. Ellen Ripley (Sigourney Weaver) takes on the alien.

After drifting through space in stasis for 57 years, Ripley is saved. She tells her employers at the Weyland-Yutani Corporation that the Nostromo was attacked by an alien. The moon where the Nostromo crew discovered the alien is now a colony, and when Earth loses communication with it, Ripley joins an expedition to investigate. They find the aliens have multiplied and attempt to save a little girl survivor named Newt (Carrie Henn).

Ripley and Newt and the others who escaped from the events of Aliens crash land on a penal colony made up of criminals with double Y chromosomes, a condition that makes them extra violent. Ripley discovers that an alien stowed away on her escape pod, so she must join forces with the prisoners to fight the multiplying aliens.

Two centuries after the death of Ripley, scientists create a clone of her in order to harvest and raise the alien embryo inside of her and breed a new alien species. When crew member Annalee Call (Winona Ryder) discovers what’s going on, she tells Ripley, who has been made stronger because of the alien DNA and has acid blood. Ripley takes on the aliens she birthed.

Sigourney Weaver has expressed interest in making an Alien 5 movie. Both Joss Whedon and James Cameron were at times attached to a possible sequel, but it never came to fruition. Most recently, District 9 director and writer Neill Blomkamp wrote a script for a fifth Alien film that was endorsed by both Cameron and Weaver, but Blomkamp said on Twitter the chances of the project moving forward are “slim.” 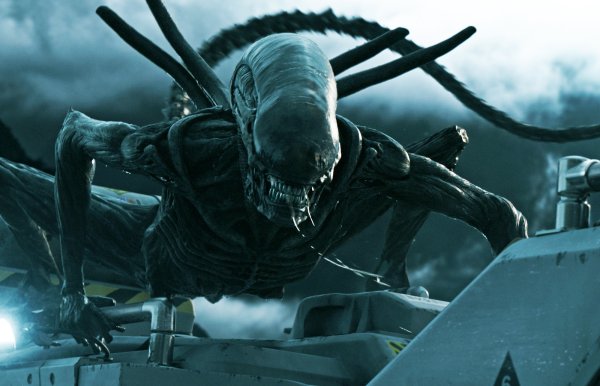