Aaron Hernandez, the ex-NFL star and convicted killer who fell from grace amid a pair of murder trials, hanged himself to death inside his Massachusetts prison cell early Wednesday, officials said.

Corrections officers found the 27-year-old former tight end for the New England Patriots hanging from a bed sheet within his single cell at the Souza Baranowski Correctional Center, the state’s Department of Corrections said in a statement. He was taken to a nearby hospital, where he was pronounced dead.

Hernandez was serving a life sentence for a murder conviction and had just been acquitted of a separate double murder days ago.

Here’s what to know about his rise and fall, and his suicide:

How did Hernandez rise to fame?

Hernandez played three seasons with the Patriots, from 2010 to 2012, according to his NFL player profile. The Patriots had signed him for five years with a $40 million contract, the Associated Press reported. Hernandez was considered a promising athlete who had come from the University of Florida and grew up in Bristol, Conn. Those close to him told the Boston Globe in 2013 that Hernandez was racked by grief when his father died in 2006 from complications after a routine hernia surgery. The death of his dad, whom Hernandez had a close relationship with, was a turning point in the young athlete’s life, friends and former teammates told the newspaper.

How did Hernandez land behind bars?

The professional football player’s career came crashing down in the summer of 2013 when he was arrested on charges of murder and gun possession and was subsequently cut from the Patriots. He was indicted that August in the shooting death of 27-year-old Odin Lloyd, who was dating the sister of Hernandez’s fiancée, according to the AP. In 2015, Hernandez was convicted of murder in the slaying and was sentenced to life in prison without parole.

What was Hernandez acquitted for?

Hernandez was also accused of fatally shooting two men in Boston in 2012 after an apparent altercation at a nightclub. Prosecutors had said Hernandez opened fire on Daniel de Abreu and Safiro Furtado while the two men were inside a stopped vehicle because he was mad that they bumped into him at the club, causing him to spill his drink, the AP reported.

Hernandez was charged and tried in the double murders in 2014 and was acquitted of murder in the case last Friday. The AP said Hernandez was emotional as he heard the verdict.

How did he die?

Hernandez committed suicide by hanging himself from a bed sheet that he tied to his cell window, prison officials said. He also tried blocking people from entering his cell, which was in a general population housing, by “jamming the door with various items” from the inside, the Department of Corrections’ statement said.

Hernandez was discovered hanging at about 3 a.m. local time and was pronounced dead about an hour later. Massachusetts State Police is investigating his death. 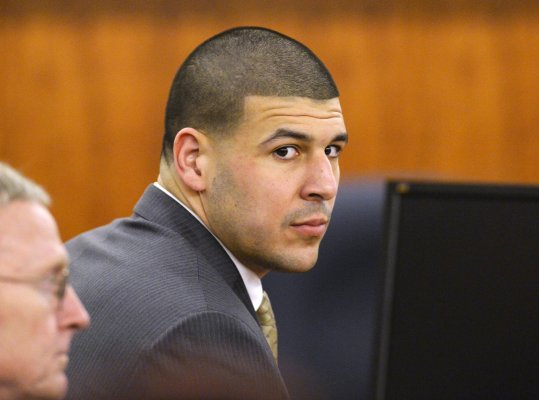