Everything You Need to Know Before Getting An IUD

Illustration by Miles Donovan for TIME
By Alexandra Sifferlin

For all women using birth control, the effectiveness of various methods is a key factor in the decision-making process. Beyond that, however, the choice gets personal. Some women focus on how much hassle is required to maintain consistent protection, others want to avoid synthetic hormones, others still want something they can use in the moment, as opposed to every day. There’s no one form of birth control that’s right for everyone, but increasingly, women are choosing so-called long-acting reversible contraceptives (LARC) like the IUD and the implant—both of which are among the most effective birth control options out there.

According to the electronic health record company AthenaHealth, the number of women who visited their doctor to discuss IUDs rose nearly 19% since the 2016 election—something experts attribute to patient fears that birth control may no longer be covered by insurance if President Trump succeeded in repealing Obamacare. The first attempt to repeal the Affordable Care Act failed, but Justice Anthony Kennedy’s retirement from the Supreme Court has renewed concerns about birth control coverage and whether abortion will remain legal. President Trump has promised Supreme Court appointments who will support overturning Roe v. Wade, prompting women to take to social media to encourage others to get an IUD.

Still, since confusion abounds, we asked experts to help us answer some of the most common questions people may have about the IUD.

What is an IUD?

The acronym “IUD” stands for intrauterine device. The IUD is a small T-shaped rod about the size of a quarter that’s inserted by a health provider into a woman’s uterus. There, it emits either the synthetic hormone progestin or copper, both of which prevent sperm from fertilizing the egg.

How do IUDs work?

There are two main types of IUDs: hormonal and non-hormonal. Hormonal IUDs work in a few different ways. The progestin from the IUD creates a thick cervical mucus that sperm cannot penetrate. “It’s literally like a cork in a bottle,” says Dr. Laura MacIsaac, director for Family Planning Services, Education, Research and Policy at Mount Sinai Health System. The progestin also thins the lining of the uterus, which may make the implantation of a fertilized egg—a critical step in the development of a viable fetus—more difficult, though MacIsaac says that’s not yet proven. The non-hormonal IUD releases copper ions that are toxic against sperm, impairing their ability to swim.

How effective is the IUD?

Extremely. The IUD has a failure rate of 0.2-0.8%. By comparison, the birth control pill has a 9% failure rate and condoms have an 18% failure rate. IUDs last between 3 to 10 years, depending on the version.

MORE: See How Every Form of Birth Control Actually Works

How much does an IUD cost?

Currently, the IUD should be free to women who have insurance coverage, due to the Affordable Care Act. Without insurance coverage, IUDs can be expensive. The range is typically between $50-1,000 up front, and there may be additional costs for the health care visit. It’s unclear whether mandates to keep birth control free for women will remain. Bedsider, a birth control education network by The National Campaign to Prevent Teen and Unplanned Pregnancy, has a detailed breakdown of costs for each brand of IUD.

What’s the difference between the various types of IUDs, like the Mirena IUD versus Copper IUD?

In the U.S. there are five IUDs that are approved for use: Mirena, ParaGard, Skyla, Liletta, and Kyleena. The Mirena, Skyla, Liletta, and Kyleen are all hormonal IUDs, which means they release the synthetic hormone progestin. The Mirena and Kyleena last up to five years and the Skyla and Liletta IUDs last up to three years. There is one non-hormonal IUD, called the ParaGard. It can last up to 10 years and has copper, which is spermicidal.

MORE: IUDs Are Getting More Popular With American Women

It can vary by location, but the basics of the insertion procedure are similar. First, MacIsaac says, a provider will typically make sure someone is not currently pregnant (with a urine pregnancy test) or could have become pregnant in the last couple days. From there, the procedure begins like a typical gynecological exam. The doctor will put a speculum into the vagina in order to see the cervix. Some doctors will apply a numbing medication to the cervix, some won’t. At this point, they may swab to test for sexually transmitted infections, but not always.

Next, the doctor will place one instrument on the top of the cervix to hold it steady and insert a skinny measuring instrument through the cervix and into the uterus to determine its depth. This helps them figure out where the IUD will sit. After that, the doctor will insert the IUD into the uterus. When it’s inserted, the arms of the “T” shape are collapsed, so the IUD resembles a matchstick. Once it’s inside the uterus, the arms pop out.

“Each step happens in rapid succession so it’s all done within a couple of minutes,” says MacIsaac.

Is getting an IUD painful?

It can vary person to person, but an IUD insertion is not a painless procedure. Some women say the pain is mild, but for others it can be intense. Some people report feeling faint or dizzy during the insertion.

“[The insertion procedure] can cause a cramping sensation inside the uterus,” says MacIsaac. “Cramps usually go down from an intense feeling to a regular menstrual cramp feeling in about 15 minutes.” People may feel cramping for some time afterward.

What are IUD side effects?

Some of the more common side effects are spotting between periods and cramping. For most women, that cramping goes away over time. Depending on the kind of IUD, changes to menstruation—both lighter and heavier—have been reported.

Some women also report being able to feel the string attached to the bottom of the IUD that is used for removal of the device.

Will an IUD affect menstruation?

Not everyone will have changes to their period, but because a hormonal IUD can thin the lining of the uterus, a woman’s menstrual flow can become much lighter, and in some cases, women stop bleeding altogether. Women using a hormonal IUD may experience some spotting on and off, sometimes for up to the first three to six months. That’s not a medical problem, but up to the woman’s comfort level. “We typically say that by six months, irregular spotting goes away,” says MacIsaac. “People are generally back to once a month, but super short.”

The copper IUD is the flipside—but again, not always. In the first few months, a period can become longer. “With longer periods and more blood there’s often more cramps,”says MacIsaac. “For most people it settles down to what it originally was by about the third month.”

MacIsaac says women should be aware of that possibility so it’s not worrisome if they have a heavier flow—especially if a woman is switching from another hormonal type of birth control.

MORE: The Best Form of Birth Control is the One No One is Using

How long does it take for an IUD to work?

The non-hormonal copper IUD is effective immediately after insertion. The hormonal IUD is effective usually within seven days after a woman gets it inserted. It can be effective earlier, but that can depend on when during a woman’s menstrual cycle she gets it inserted. If a woman is ovulating when the hormonal IUD is inserted, doctors recommend using another form of protection for seven days.

Can I feel the IUD during sex?

A woman and her partner should not be able to feel the IUD during sex, since the IUD is in the uterus and not the vagina. There is a string that is visible in the vagina—it’s attached to the IUD and is required for removal of the device—and some people report that they or their partner are aware of it during sex. If that’s the case, a provider can usually adjust it.

Can you get pregnant with an IUD?

It’s very unlikely. “The pregnancy rate is so low with the IUD that if you get pregnant it’s considered kind of crazy,” says Dr. Colleen Krajewski, a medical advisor for Bedsider and an assistant professor at the University of Pittsburgh. Some providers may recommend that a woman come back after her initial insertion in order to make sure that the IUD is still positioned correctly.

Can an IUD slip out?

It’s possible but very uncommon. The medical term for that is “expulsion,” and Krajewski says the risk is around 0.05%. The majority of people will know if it happens, but you can always feel for the aforementioned IUD string to confirm that the device is still in place.

“Almost every patient tells me they have a friend-of-a-friend-of-a-sister who had an IUD complication,” says Krajewski. “It’s certainly uncomfortable and scary, but it’s not damaging.”

Even with the potential for complications, IUDs are the most commonly used birth control method among female family planning providers. “We see all the methods and all the complications and failures, and it’s still what we pick for ourselves,” says Krajewski. 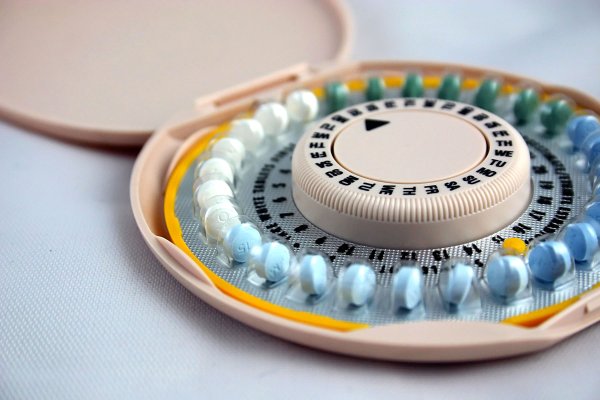 Why Birth Control Pills Might Be Making You Feel Bad
Next Up: Editor's Pick