Riz Ahmed on Feeling Like an Outsider in Hollywood

It’s hard to imagine Riz Ahmed — star of movies and shows as diverse as Rogue One: A Star Wars Story, HBO’s The Night Of, Netflix’s The OA and, most recently, Girls — as an outsider. But the 34-year-old, a first-time member of the TIME 100, says he’s had plenty of experience feeling like a fish out of water.

“When I got to Oxford University… the first person I spoke to laughed in my face and told me that I reminded them of Ali G,” the British-Pakistani actor tells TIME in a video interview. “I stuck out there in terms of where I was coming from, the way I spoke, the way I dressed, who I was.”

But Ahmed didn’t let this feeling of being an outsider — a trait which he thinks is common among people working in creative industries — hold him back. “The place where you feel that you stick out the most is the place where you should stick out and stay,” he says. “That’s where you can contribute something new and something fresh.”

Four Lions, a satirical comedy about wannabe Jihadi suicide bombers, is widely considered Ahmed’s breakout role — but he says he nearly didn’t take the part. “I wanted to get away from doing roles that had anything to do with my racial background,” he says. “I wanted to get to what I call the Promised Land, where you’re playing a character that could be called Nasir Khan, but the fact that he’s in prison for [the] suspected murder [of] a girl is nothing to do with his race.”

Ahmed’s roles have grown more diverse since Four Lions, which won a BAFTA in 2011. However, he has remained a strong advocate of increasing representation in popular culture and beyond, even lecturing British Members of Parliament on the subject earlier this year.

“Whether you’re a petite blond girl [or] a big black guy, we carry a necklace of people’s assumptions,” he says. “I think that film and culture and television and novels and art and music can play an amazing role in stretching that necklace or [even] freeing people from that necklace. So you do just start to see them more as human beings.”

Now a Golden Globe nominee, Ahmed’s days of typecasting seem behind him. But even though he knows he can no longer count himself as a genuine outsider, he still likes to stay on the periphery. “I can start to feel claustrophobic if I’m part of a scene,” he says. “I like dipping in and out. But yeah — for now it’s nice to feel embraced by a creative community.” 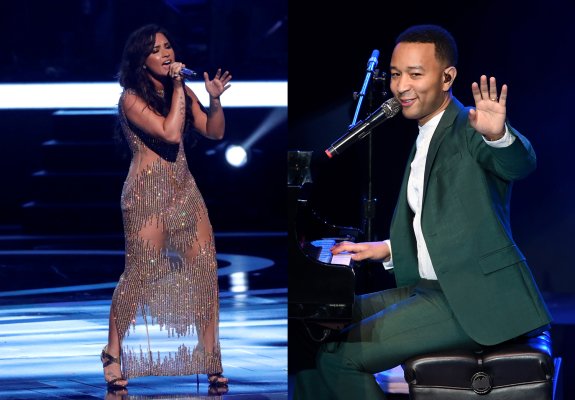 John Legend and Demi Lovato to Perform at the TIME 100 Gala
Next Up: Editor's Pick