At 9.12am on Tuesday April 18, Britain’s political journalists received an email informing them Prime Minister Theresa May was going to make an announcement outside her official residence at 11.15am.

Unusually, there was to be no pre-briefing of this statement. May was preparing to drop a bombshell and the press corps was mystified. All they could do was speculate – typically on Twitter – why there could be such secrecy. Was the Prime Minister, who has Type 1 Diabetes, going to stand down because of ill health? Was she preparing to mount an offensive in Syria or North Korea? Perhaps May was agreeing to another referendum on Scottish independence?

No — instead it was to be a general election that few saw coming, and even fewer knew about ahead of time.

Lacking a mandate and with the opposition Labour party trailing badly in the polls – just 23% to the Conservative Party’s 44% according to pollsters at YouGov – May decided on a walking holiday over Easter that the time was right to go to the country, a reversal from her oft-stated refusal to hold an early election.

Perhaps the most astonishing aspect of this massive announcement is not how May kept it quiet from the press, but from her own party’s members of parliament (MPs). Senior Conservative sources say only “a handful” of ministers were aware of her decision before the cabinet met at 9.30am yesterday, while no backbenchers — MPs who do not sit in government — were aware of it until she spoke.

A few Conservative lawmakers had found out about an announcement around the same time as journalists. Sir Simon Burns, a former transport minister, says he and a few colleagues spent “about an hour and 20 minutes speculating about what the hell was this.” John Whittingdale, a cabinet minister until May took office, heard an announcement was coming on the radio while driving to Westminster. “I phoned my best informant,” he smiles. “She thought it was something about Syria. None of us had any idea.”

As the minutes to the 11.15am announcement ticked away, journalists started focusing on the option of an early general election. A giveaway clue came when May’s lectern was placed in Downing Street – it didn’t have a government seal, meaning this was party political business.

But still, it seemed unlikely. Under the Fixed-term Parliaments Act 2011, another general election was not scheduled until 2020, and the Prime Minister would need to get two-thirds support of the House of Commons to call one.

Graham Brady, chairman of the Conservative Party’s extremely influential 1922 Committee and unofficial leader of the party’s backbenches, had a pre-arranged call with May at 11.20am, but took little notice when told it would be delayed by 20 minutes. Unaware of the announcement, Brady took his seat at a meeting of the editorial advisory board of The House, a political magazine written for lawmakers and their staff in Parliament, at about 10.30am.

Hearing rumors a general election was coming, Brady laughed them off. At around 11am, “you could have heard a pin drop” in the meeting, as one source puts it, when some senior broadcast journalists had sources confirm a June 8 election.

But other Conservatives weren’t convinced they were more than rumors. Just before 11am, senior backbencher James Cleverly wrote on Twitter: “I’m going to look either very clever or very daft in the next half an hour and say she is not going to call an early election.”

In a schools meeting at the Department for Education, Peter Bone — an infamously rebellious Brexiteer — said he and other lawmakers were also skeptical. “We said ‘No, no, no, there won’t be, maybe, but hopefully not, it’s something like a death in the Royal Family.’”

Then Bone bumped into the Scottish National Party’s (S.N.P.) deputy leader in Westminster, Stuart Hosie. He’d had confirmation from whips in the Conservative Party, he told Bone — it’s official. “Perhaps the S.N.P. is closer with Number 10 than they make out,” grins Bone, of a party that wants Scotland to be ruled from Edinburgh not London.

Just as news reached the press corps, May strode out 10 minutes early to confirm a June 8 poll. “Our opponents believe that because the Government’s majority is so small, our resolve will weaken and that they can force us to change course,” said May. “They are wrong.”

Shocked, many conservative lawmakers stood and gossiped in the airy atrium of Portcullis House, an office block for hundreds of M.P.s adjacent to the Palace of Westminster. Cleverly, the lawmaker who had bravely predicted she wouldn’t call an election, sent out another tweet:

At 5pm, May finally addressed her lawmakers at a special meeting of the 1922 Committee. She spoke for six or seven minutes, but took no questions.

Even internal critics were impressed at the move. Nicky Morgan, who May sacked as education secretary last year and who has subsequently clashed with the Prime Minister over her approach to Brexit, says: “It was a good atmosphere and it was clear this isn’t just about Brexit, because there are lots of domestic issues to debate. It’s about saying now that politics needs a bit of a re-set.”

Now that the surprise has worn off, lawmakers are expected on Wednesday to back May’s motion to call a general election. Labour leader Jeremy Corbyn has little choice but to back an election, even though his party is forecast to lose as many as 50 seats. He could hardly be leader of the opposition and not agree to the opportunity to change government.

Few thought steady May had the capability to surprise. Instead, she has shocked even her own lawmakers — much to their delight. 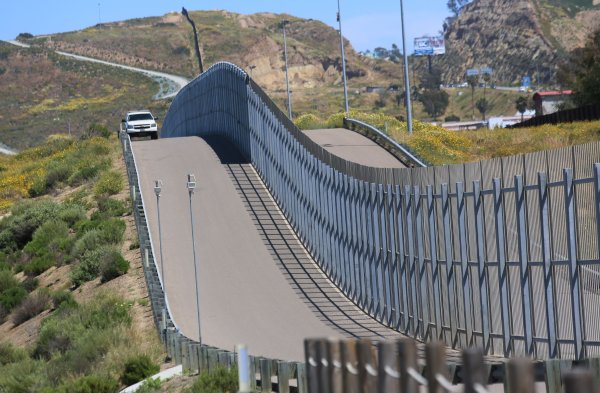 Mexico Asylum Applications Up 150% Since the U.S. Election
Next Up: Editor's Pick