Antarctica’s ice may melt faster than previously thought as result of a newly discovered network of lakes and streams that destabilize the continent’s ice shelves, according to new research — making them more vulnerable to collapse.

Scientists have long understood that water from melted ice harm ice sheets by flowing into cracks and refreezing, but that phenomenon was thought to be limited to a small part of the continent. Researchers behind a new study published in the journal Nature this week found that the process has been ongoing for decades and actually occurs across the continent including in places where scientists did not think liquid water was commonly found. The pace of the damage will increase as temperatures continue to rise as a result of man-made global warming.

“This is not in the future—this is widespread now, and has been for decades,” says study author Jonathan Kingslake, who studies glaciers at Columbia University, in a press release. “I think most polar scientists have considered water moving across the surface of Antarctica to be extremely rare. But we found a lot of it, over very large areas.”

The study draws on satellite images of the continent dating back to 1973 and aerial photos collected by military planes from as early as 1947. The scale of some of the water systems is staggering with some streams extending as long as 75 miles and some lakes stretching several miles across, according to the study.

Antarctica holds 90% of the world’s ice and rapid ice melt and the associated collapse of ice sheets could have profound effects across the globe, including a steep rise in sea levels, but much remains unknown about the speed at which Antarctic ice is melting. An accompanying study also published in Nature this week evaluates a specific region in Antarctica — the Nansen Ice Shelf — and finds that the worst destabilizing effects are avoided as the melted water drains into the ocean. It remains unclear which ice sheets will respond like Nansen and which will have the destabilizing effect seen elsewhere.

“It could develop this way in other places, or things could just devolve into giant slush puddles,” says study author Robin Bell, a scientist at Columbia University, in a press release. “Ice is dynamic and complex, and we don’t have the data yet.”

Previous research has suggested that ice melt from Antarctica could drive more than 3.5 feet in sea level rise across the globe by 2100. And Antarctica is just one source on along list that includes ice melt from the Greenland ice sheet and other glaciers as well as the expansion of sea water at warmer temperatures. The complete melting of the Antarctic Ice Sheet would raise global sea levels by 200 feet, though climate change researchers do not expect such a result.

Countries around the globe committed in the 2015 Paris Agreement to work to keep temperatures from rising more than 2°C (3.6°F) by 2100, though it remains unclear whether they will be able to meet that target. Even if that target is met, sea level rise will average 0.2 meters (0.67 feet) by 2100, though many places like the East coast of the U.S. will face a far greater rise, according to recent research. 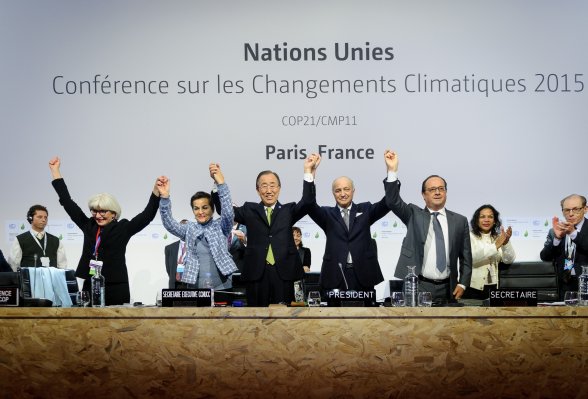 World Leaders on Edge as Trump Wavers on Climate Deal
Next Up: Editor's Pick