Prince Harry has been praised by mental health experts for speaking openly about enduring years of “total chaos” following the death of his mother, Diana, Princess of Wales, who was killed in a car crash in Paris when he was 12.

In a podcast interview with the U.K.’s Daily Telegraph, the 32-year-old prince said he has come “very close to a complete breakdown on numerous occasions” and has turned to a ‘shrink’ to discuss his problems “more than a couple of times,” describing the therapy process as “great.”

Harry’s interview, which marked the first time a member of Britain’s Royal Family has spoken so candidly about mental health, has been praised by campaigners and charities. Daily Telegraph columnist Bryony Gordon, who spoke to Prince Harry and has written extensively about coping with her own mental health problems, including bulimia and obsessive compulsive disorder, described the interview as a “watershed moment” for mental health.

Mental heath charity Mind described Prince Harry as “inspiring” for opening up about his mental health. “It shows how far we have come in changing public attitudes to mental health that someone so high-profile can open up about something so difficult and personal,” said Paul Farmer, the charity’s chief executive.

Sue Baker, director of Time to Change, a charity that battles against the stigma of mental health problems, said Prince Harry’s honest interview “will have helped change attitudes, not just at home but also overseas.” Baker added that it was a dream of hers 20 years ago to “see the royal family join sports people, music stars, politicians and business leaders as well as everyday people in sharing their mental health experiences in all sorts of communities.”

She added: “We know… that people speaking out helps to overturn generations of stigma by shifting outdated attitudes and challenging discrimination and that together we are making long lasting positive social change.”

A spokesperson from Samaritans, the long-standing emotional support service, described Prince Harry’s decision to speak out about his mental health as “immensely valuable.” In a statement the group said: “We need role models from all walks to life and Prince Harry talking about his experience is immensely valuable as it reduces stigma, shows anybody can struggle with difficult feelings and encourages other men of all ages to speak out.”

Marjorie Wallace, chief executive of the mental health charity SANE, said it was important for people like Prince William and Prince Harry to speak out about mental health “because when normal feelings like grief become malignant they can cause deep distress in later life.” She added: “However, we hope they use their influence to ensure frontline services, which are being cut daily, are funded to ensure that when people seek and need treatment, they are not left to wait for too long, which can put lives and futures at risk.”

And Chris Martin, CEO of The Mix, a charity that supports people under the age of 25, told TIME: “It’s fantastic to see Prince Harry, an international role model for millions of young people, bravely sharing his own mental health story in the hope of helping others.” 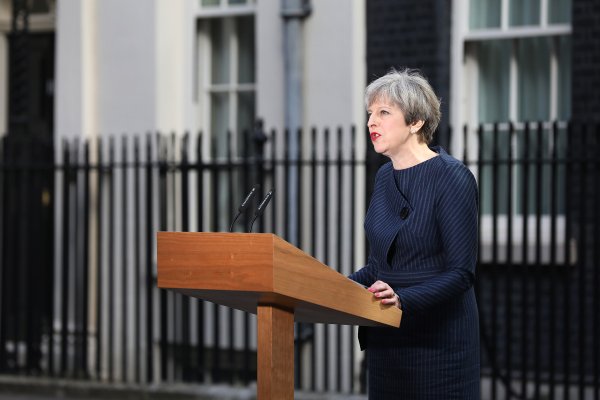 This Is What Brits Are Asking Google About Theresa May's Surprise Election
Next Up: Editor's Pick