The Galaxy S8 Is the Samsung Phone You've Been Waiting For

The good: Impressive design; Crisp screen; Clean software; Long battery life
The bad: Expensive; Facial recognition not always reliable; Fingerprint scanner can be hard to reach; Virtual assistant lacks voice recognition at launch
Who should buy: With its eye-popping screen and long-lasting battery, the Galaxy S8 is sure to please most smartphone shoppers, even iPhone loyalists. But it’s more expensive than the average high-end phone.

If Samsung’s past several months was a movie script, last fall would’ve been the crisis point — the moment when the audience is wondering when, if ever, the protagonist will recover from some crippling blow. Following reports that its Galaxy Note 7 was overheating and in some cases catching fire, the South Korean technology firm recalled the highly-acclaimed device. The timing could not have been worse, as rivals Apple and Google were just releasing new flagship phones of their own. The calamity cost Samsung as much as $17 billion and tarnished its brand.

Fast forward seven months to today, and Samsung appears primed for a much-needed comeback. That’s thanks to its new flagship smartphone, the Galaxy S8. The S8, available April 21, feels like a culmination of years of effort on Samsung’s part. Its large, impressive screen, easy-to-use software and long battery life make it a compelling choice for Android fans and even iPhone users who find themselves tempted to switch.

Of course, that’s not to say everything about the Galaxy S8 is perfect. It’s expensive compared to most flagship phones, and some features don’t always work as promised.

Samsung first started experimenting with “curved” screens with the Galaxy Round in 2013, but it hasn’t perfected the idea until now. The S8’s slight contours near the display’s edges, combined with the smaller bezels, give the impression of a borderless screen. This subtle-yet-impressive design makes the S8 look better than the LG G6, which also has a thin frame around its display but with a thicker, more angular edge.

To complement the svelte new look, Samsung has given the Galaxy S8 slick new software. Gone is the symbol toward the bottom of the display for launching the app menu. The Google search bar has been updated with a softer appearance. And the app icons are rounder than those on Samsung’s previous phones. These are minor changes, but together they give the Galaxy S8 a tighter and simpler look that’s a much appreciated improvement from the busy software found on previous Samsung devices. (Unfortunately, I still found myself accidentally triggering Samsung’s Edge shortcuts when swiping from the right side of the screen.)

One of the Galaxy S8’s headline features is its new Bixby virtual assistant, which Samsung says can learn about your habits and serve up helpful information at the right time. Bixby’s voice-activated features won’t be available on the S8 until later this spring, but its other capabilities are accessible right away. Swiping over to the right pulls up your Bixby Home feed, which displays tidbits like news headlines, the weather, and app widgets. Here, Bixby showed me songs I recently listened to on Spotify, terms that are trending on Facebook, and GIFs from Giphy, among other things. While it was sometimes useful to see upcoming reminders and news with just a swipe, I didn’t feel like this feed was any better than similar functions from Google and Apple.

Samsung’s new artificial intelligence software also works with the Galaxy S8’s camera to help translate text, identify landmarks, and scan items for sale at a store. (Amazon explored a similar concept with the Firefly feature on its now-defunct Fire phone released in 2014, but it was largely dismissed as a ploy for buying more items from the retailer.) When the feature works, it’s great, but it’s not 100% reliable yet. It had no issue translating text from an English magazine into French, for example, but it struggled when interpreting handwritten notes.

The Galaxy S8’s front-facing camera has learned a few new tricks too, such as iris scanning and facial recognition. This should make it possible to unlock your phone without scanning a fingerprint or typing in a passcode. But it’s still quicker and probably safer to use those older unlock methods. The S8’s facial recognition only worked roughly half the time I tried it, and a tester had previously fooled the S8’s facial recognition by using a photo instead. The iris scanning tech worked much more reliably; in most cases, it quickly recognized my eyes even in low lighting while I had been wearing glasses. This is especially important considering Samsung moved the fingerprint scanner to the rear of the S8, making it harder to reach without bumping the camera.

Battery life always varies depending on how you use your phone, but the larger model consistently had more than enough juice left after a full day of sending emails, checking social media, streaming videos, browsing the web and taking photos. Like Samsung’s older phones, the Galaxy S8 also features quick-charging technology, allowing it to fully replenish its battery in about one hour and 45 minutes.

The 12-megapixel camera on the Galaxy S8 remains largely unchanged compared to that of the S7, save for better image processing that Samsung claims results in better low-light photos. The Galaxy S8 captured richer color and contrast in some circumstances compared to the iPhone 7, although the iPhone often shows colors that are truer to the actual scene. This is most evident when looking at the sky in the photos included in our test, which is a more vibrant shade of blue in images shot on Samsung’s phone versus those taken on the iPhone. Apple’s larger iPhone 7 Plus smartphone, however, is still king when it comes to zoom quality thanks to its dual lens setup.

But selfie takers may have a reason to side with Samsung, as its 8-megapixel front camera generally produced clearer results than the iPhone. Samsung’s camera also does more to smoothen skin and boost color than Apple’s, which may result in more flattering selfies but can also look unnatural.

Simply put, the Galaxy S8 is one of the best smartphones you can buy right now. That’s mostly thanks to its design and other basics, rather than its flashy new features like Bixby and facial recognition tech. Here, Samsung nailed the essentials, producing a phone with a refreshingly impressive design, dazzling screen, long battery life and a great camera. You’ll certainly pay top dollar for this top smartphone: Competing models, like Apple’s iPhone, start at around $100 less — but for Android fans in particular, it may well be worth it. 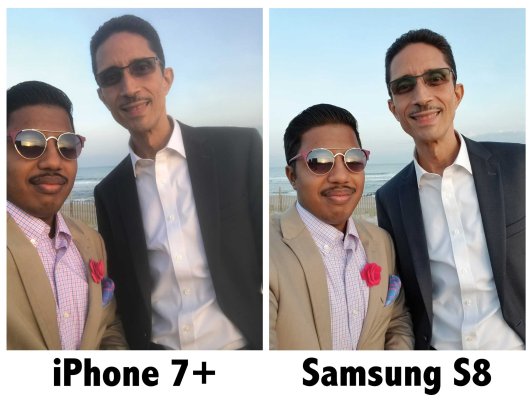 How the Samsung Galaxy S8's Camera Compares to the iPhone 7 Plus
Next Up: Editor's Pick