A new poll out on Tuesday puts numbers behind a trend you’ve probably seen evidence of in your feeds: dictionaries are hot right now. And that is thanks, in good part, to Donald Trump.

Dictionary.com commissioned a survey, conducted by Harris Poll, to ask more than 2,200 Americans about how they are dealing with current affairs. Half of them said they are reading more political news since the 2016 election and nearly 60% said they feel a greater need to analyze the meaning of words used by politicians. Per the poll, a third of Americans have looked up words because of the election and expanded their vocabularies, action that dictionary editors have seen in website traffic and on social media.

“People have been curious about Donald Trump and the words he has used — and the words used around him — since he announced his candidacy,” says Jane Solomon, a lexicographer at Dictionary.com. She can casually reel off a list of words Trump used or had thrust upon him that sent lookups spiking: shrill, schlonged, bigly, xenophobia, trumpery, alt-right, rigged, braggadocio, temperament, hombre. When something like Trump happens to an election cycle, the standard vocabulary simply doesn’t cover it. But that’s just part of the story.

In a time when many distrust politicians as well as the media meant to act as a check on those politicians — and when the very nature of reality seems beholden to appearances — people are starving for an arbiter everybody trusts, something concrete to point to and say “those, sir, are the facts.” And the dictionary is about as close as you can get to a universally accepted neutral party. It is a weapon and a security blanket, used by Democrats and Republicans alike.

The average person trusts the dictionary to settle an argument, even if they don’t trust that “fake news” article their friend shared on Facebook or that academic elite or that poll. As Peter Sokolowski, editor-at-large for Merriam-Webster, says, “Traditionally the dictionary has called balls and strikes.” Often those calls have been related to spelling and grammar, he says, but these days “something is different.” The meanings of even the most basic words — like fact — are suddenly in need of confirmation.

People have been begging dictionaries to act as referees, driving up their retweets and replies on Twitter and also driving them to be cautious about when they weigh in. Lauren Sliter, who runs Dictionary.com’s social media accounts, says she’ll regularly get requests to put people in check. “’Can you please tell X what fascism is because they don’t seem to understand that Donald Trump is a fascist,'” she says of the messages they’ll get, “or a populist, or a misogynist.”

Sliter says they try to focus on words that are driving people to their pages because of misunderstanding and “not tweet about a word where everyone is already in agreement,” though the real-time nature of news consumption and social media adds urgency to making those calls. “The dictionary, paired with the even playing field of Twitter,” she says, “has become this focal point of consensus.”

When dictionaries have joined the conversation after Trump or his aides have caused debate over a word’s meaning, the responses have often gone viral and become news stories of their own. After Kellyanne Conway introduced the notion of “alternative facts,” dictionary editors tweeted the definition of fact: “a piece of information presented as having objective reality.” After press secretary Sean Spicer said that getting “less money” didn’t necessarily amount to a “cut,” dictionary editors tweeted the definition of cut: “a reduction in price, salary, etc.” After Ivanka Trump was asked in an interview if she was complicit in her father’s decisions and said she didn’t know the definition of the word, dictionary editors provided one: “helping to commit a crime or do wrong in some way.”

This has led to some allegations that dictionaries are “trolling” Team Trump. The editors say that’s not the case. Sokolowski emphasizes that Merriam-Webster has been tweeting for years about news trends they’re seeing reflected in lookups, whether the biggest story is Hillary Clinton calling people “deplorables” or United Airlines describing violently bumped passengers as “volunteers.” And few would dispute that Trump “is clearly the biggest story” around, as he says, or that Team Trump has sowed confusion with their words in remarkable ways.

As TIME has reported, Trump does not have a clear-cut relationship to the truth, sometimes flouting the general consensus or evidence that contradicts his interpretation of things. That means there is more of a question about what he may believe a word means, especially because he has backtracked on his own words by suggesting that people misinterpreted them — when they read them in the plainest way.

Spicer (who has himself sent people running for the dictionary by using terms like “Holocaust centers”) said, for instance, that Trump didn’t mean “wiretaps” when he tweeted that Obama had his “wires tapped,” that he didn’t mean “military operation” when he used the words “military operation” to describe immigration enforcement. All of which begs the involvement of a dictionary, as Trump’s critics continue to fact-check the big picture as well as every syllable that comes out of his mouth (or the mouths of people speaking on his behalf).

While dictionaries go to great lengths to eliminate any bias in their pages, some tinges will inevitably remain. After all, humans are writing the definitions, even if they analyze mounds of evidence about how a word is being used in the world before they distill a definition. And it’s hard to anticipate what might look slanted or close-minded in 50 years, which is why dictionaries are in a constant state of revision.

The misconception that a dictionary is “authorless” has “made dictionaries more trustworthy, and it also makes people who write dictionaries, lexicographers, take their jobs very seriously,” says Solomon, who writes definitions for Dictionary.com. She says she is thinking harder these days about when an entry is political: Sure, Black Lives Matter is political but is the Trump-uttered hombre political now too? Merriam-Webster’s Sokolowski says the stirs on Twitter have raised another interesting query in their world: “When is presenting a dictionary definition a subversive act?”

Dictionaries have been accused of having political bents in the past. Though they don’t take partisan sides, they do still have an ethic, one that editors say more people are buying into these days. “There’s definitely a reemergence of the thinking that words matter and how you use words matters,” says Dictionary.com’s Sliter. Solomon echoes her. “The meaning of words is vital, and when people in power use words in a way that confounds us,” she says, it’s only natural to use whatever means are handy to “try to understand.” 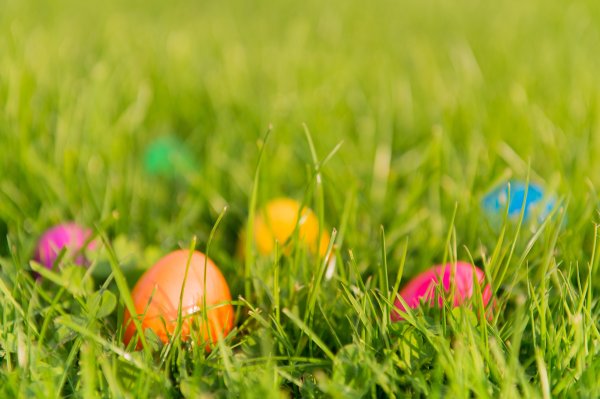 This Is Where the Word 'Easter' Comes From
Next Up: Editor's Pick