If you were to hear that the national hopes of the Democratic Party currently rest on the shoulders of a 30-year-old rookie candidate in a Georgia congressional district the GOP has controlled for nearly four decades, you might assume the Democrats had fallen into a state of woeful disrepair.

Yet the rise of Jon Ossoff is a clear sign of the momentum coursing through the party. In the first closely contested race of Donald Trump’s presidency, Ossoff is leading an 18-candidate field in Tuesday’s special election for the North Atlanta House seat vacated by Health and Human Services Secretary Tom Price. The documentary filmmaker has pulled in $8.3 million in the space of a couple months—more than all but three House candidates raised in the entire two-year 2016 election cycle.

Ossoff’s edge in the polls and massive fundraising haul look like spooky omens to some Republicans. “I can’t believe what I’m seeing,” says Chip Lake, a Georgia GOP strategist. “It’s mind-boggling. It certainly goes to show how unified the Democratic Party is against this President.”

But if the race has become a national referendum on Trump, these days Ossoff rarely even mentions the President’s name.

“There are clearly some national implications,” Ossoff conceded in a recent interview with TIME. “But that’s not what the campaign is about.”

Which seems like a smart move. Georgia’s 6th district, a wealthy patch of suburbs perched atop Atlanta, isn’t exactly Trump country: the President won here by just a point despite little local investment by Hillary Clinton’s campaign. At the same time, it’s no liberal hotbed. Price, one of the most conservative members of Congress before joining the President’s cabinet, carried it in November by 23 points.

And so the cautious and soft-spoken candidate has tuned his campaign pitch to a frequency he believes voters want to hear. Ossoff’s stump speech is stuffed with promises to bring new tech jobs to the area and restore accountability in Washington. He talks about working across party lines and governing from the center. Trump’s presence in the race hovers over it all; when Ossoff talks about “shared values” and “uniting people,” the juxtaposition with the divisive President is unmistakable. But ever since he first drew notice with a campaign pitch to “Make Trump Furious,” Ossoff has been disciplined about localizing the race.

The centrist pitch hasn’t dissuaded the liberal Democrats who support him. “We didn’t ask Ossoff to fill out any kind of questionnaire, and we didn’t subject him to any ideological litmus test,” says David Nir, the political director at Daily Kos, whose readers have funneled more than $1.35 million to Ossoff. “Our community has responded so enthusiastically because this race is an opportunity to send a message to Republicans and to help provide a check on Trump.”

At a campaign stop at Atlanta’s Oglethorpe University earlier this month, Ryan Holtzen, a 19-year-old English major, asked Ossoff why he doesn’t advertise his party affiliation in some campaign ads. Ossoff explained he was “building a coalition here around something that is bigger than party,” which is perhaps not the kind of thing that an anti-Trump Democrat would want to hear. But Holtzen seemed untroubled by the response. “I feel like a lot of people put too much emphasis on ideology,” he shrugged.

Trump is certainly fixated on it. “The super Liberal Democrat in the Georgia Congressioal [sic] race tomorrow wants to protect criminals, allow illegal immigration and raise taxes!” the President tweeted on Monday.

Whether Ossoff will win is an open question. Under Georgia rules, every candidate in the race runs on the same ballot, regardless of party. If none earns a majority, the top two finishers proceed to a June runoff. In the field of 11 Republicans, five Democrats and two independents, Ossoff is sitting in the low-to-mid 40s, according to recent polls. That’s more than enough to grab the top spot but not quite enough to clear the 50% threshold required to win the contest outright. “We’ll be ready for the runoff, but we’re going for the knockout,” Ossoff says.

But Republicans say they are confident they can hold Ossoff under 50%. If that happens, they believe the party’s voters will coalesce behind Ossoff’s opponent to defeat the Democrat in June.

“You might ask Senator Michelle Nunn how he will do,” former Republican House speaker Newt Gingrich, who represented the 6th district for two decades, wrote in an email to TIME, referring to the 2014 Georgia Senate candidate—a ballyhooed recruit who drew oodles of fanfare before getting trounced on Election Day. 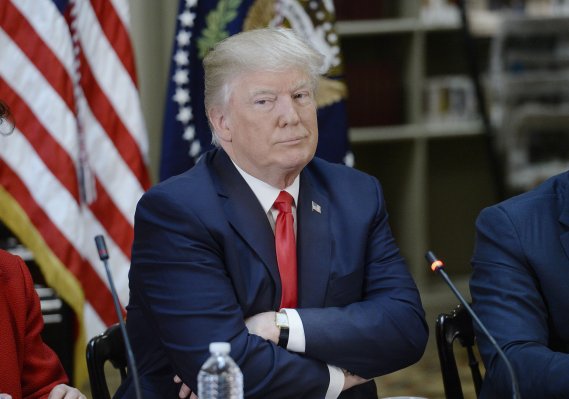 Here’s What President Trump Got Wrong About the Kansas Special Election
Next Up: Editor's Pick