Over the course of nearly 50 years, Pulitzer Prize-winning historian David McCullough has traveled across the U.S. speaking to audiences — at universities, the White House and even before a joint session of Congress — about the lessons of history. Some of his most recent speeches are compiled in his new book The American Spirit: Who We Are and What We Stand For, out Tuesday.

McCullough sat down with TIME to talk about why he’s publishing this anthology now, how history will judge us and what the past can teach our presidents.

TIME: Why compile your speeches now?

McCullough: I felt it necessary. The time was right. We began work last summer as the campaign got more…off track. We have to remind ourselves of what we believe in, in the way of standard behavior, standard dedication, standard patriotism. And in order to do that, you have to understand history. We’ve been raising several generations of young Americans who are, by and large, historically illiterate. And it’s not that they’re not bright. It’s not that they’re indifferent to learning. It’s not that they’ve grown up with great disadvantages. It’s not their fault. It’s our fault. Almost 80% of colleges and universities no longer require history for graduation.

What should history classes focus on to be the most useful in today’s world?

History is about people. History is about cause and effect. History is about leadership or lack thereof, or twisted vision that inflicts its mistakes upon leaders. As I point out in the book, the best of our presidents, using the presidency as a model of leadership, were all avid readers of history. Several of them were historians. Woodrow Wilson was professionally, a professor at Princeton. Theodore Roosevelt wrote one of the best histories of the Naval War of 1812. John Kennedy wrote three works of history, one of which, Profiles in Courage, is still a very good book. Dwight Eisenhower wrote one of the best books ever written on World War II. And he wrote every word himself.

Even if you do nothing it has an effect. It isn’t just that the effect comes from action. It can come from inaction. Some of the best decisions ever made by our presidents are when they decided not to do something. Harry Truman decided he would not use the atomic bomb in Korea. General Eisenhower decided not to go into Vietnam. John Adams decided not to go to war with France when it would have been disastrous, and it made him very unpopular. So when you take that job, you have to not only understand how the government works, but you have to understand how human beings work, and that people are imperfect. We’re so inclined to portray the heroes of the Revolutionary War era as all perfect. No, they weren’t perfect.

How can we judge that? Should we use today’s standards to assess those leaders, or just the standards of the time in which they lived?

First you have to understand the time in which they lived. There was no simpler time, ever. There was no easier time, ever. Unless you understand what it was like to go through the Civil War, what the influenza epidemic of 1918 was like, you have no appreciation of that. History is an antidote to the hubris of the present. History should be a lesson that produces immense gratitude for all those who went before us. To be ignorant of their contribution is rude. And for anyone in public life to brag about how they don’t know any history — and don’t care to know any history — is irresponsible.

President Trump has expressed admiration for Andrew Jackson, Henry Clay, Douglas MacArthur and George Patton. What does that say about the type of leader he aspires to be?

He’s said he does not read history, or presidential biographies, because, as he said, he has a mind that can reach beyond all that. That’s utter nonsense. That’s ego-centric illusion. To me, it’s as if we’ve put someone in the pilot seat who has never flown a plane or even read about how you do it. So we have to cope with it, by counteracting that, with young people coming along that realize that this is a lesson in how not to be a leader.

Is he the reason you wrote this book?

Do you think America is truly exceptional? Should students be taught that?

I think America has come further in giving opportunity to the best that’s in human nature than any other country ever in history, and we seem to be holding on for over 200 years already. We’ve greatly improved the inequalities and the shortcomings of our way of life as we’ve moved forward. One of the things I feel is that we are a country of good people. We are a country of well-meaning, hard-working, conscientious people — 90% of us. And, we are blessed with progress in a number of fields today, the likes of which no people on Earth have ever enjoyed in all of history. Think just for example of what’s happened in medicine. Think of the improvements that have been made in the opportunity for education. We have the strongest, most powerful, well-equipped military force in the world. I am optimistic. I don’t think we should feel — because we’ve got this clown holding stage — that that’s what we’re destined to do from now on.

What name should historians give this period of history we’re living in?

It’s not my profession to judge things now. You’ve got to wait 50 years. But I’m sure they will wonder what in the world overcame us.

You were on the first board of scholars for the new Museum of the American Revolution in Philadelphia, which opens this week. What are its most valuable artifacts in your opinion, the ones that people should make sure to see…

I don’t think the artifacts are the most important.

So what is important about the museum’s collection?

What do you think future historians will think of the material that we’ll leave them from today?

We’re producing so much for future historians that they may be just overwhelmed, because so much of it is redundant and boring. There’s a record of everything, every day. Facebook, for God’s sake! It’s like a landslide, every day, of stuff.

So the fact that we’re not writing letters to each other won’t hurt them?

Oh, that’s a huge loss. Huge loss, because no one in public life would dare keep a diary anymore. It could be subpoenaed and used against you in court. And nobody writes letters. If you’re interested in immortality, start keeping a diary, and when you get to the point when you think maybe the curtain is going to come down on you, give it to the Library of Congress, and you’ll be quoted forever because it will be the only diary ever in existence.

Is there a particular biography you wish you had written or would like to see a historian write? Some figure who you think is ripe for exploration?

I think there’s a good biography to be written about Gerald Ford. He was a far more interesting figure of depth as a leader than he’s given credit for.

What’s your favorite historical monument or museum in the U.S. or abroad?

The Shaw Memorial in Boston. A powerful one, in the extreme, because it gives the black troops that served in the [Civil] War a chance to be seen as individuals and not just mechanical figures.

Favorite movie that’s based on a historical event?

My favorite movies aren’t of real events. Harvey, with Jimmy Stewart. Some Like It Hot. 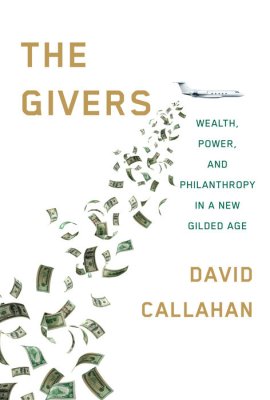 The Givers Review: The Pitfalls of Giving It All Away
Next Up: Editor's Pick