How the Tax March Echoed the 2009 Tea Party Rallies

Thousands of people marched in cities around the country to demand that President Trump release his tax returns on Tax Day, in a demonstration that echoed the 2009 tax rallies that launched the Tea Party movement.

Saturday’s Tax March, which took place in nearly 200 cities around the country, was unusual for a liberal protest both in its subject matter and its specificity: rather than focus on more typically leftist issues like police brutality, climate change or reproductive rights, the Tax March was all about taxes, which is typically a rallying cry of Republicans. Specifically, the marchers had just one demand: to see Trump’s taxes.

Most of the protests were largely conflict-free, but at least a dozen demonstrators were arrested in Berkeley after a pro-Trump demonstration resulted in a fistfight against counter-demonstrators, punctuated with pepper and smoke bombs. It did not appear to be related to the Tax March.

The March took place exactly eight years after the first major Tea Party rally to protest Obama policies on April 15, 2009, which was widely credited as the beginning of the far-right Tea Party movement. Saturday’s Tax March was superficially similar to that first Tea Party in some ways: many of the protesters were older than the millennials who flocked to earlier anti-Trump rallies, and there were more conspicuous displays of patriotism than one normally sees at liberal rallies.

Older people generally tend to care more about tax issues, and the Tea Party was made up mostly of older Americans: three-quarters of self-identified Tea Party members are over 45, according to a 2012 CBS News poll, and almost a third are over 65. Similarly, the Tax March tended to attract a slightly older set of protesters than other anti-Trump marches have. Many said they had protested against the Vietnam War and segregation in the 1960s and 1970s.

“It seems older than the Women’s March was,” says Betsy Klein, 69. “Because a lot of younger people haven’t had experiences like we have, paying our taxes every year for 40 years. Every other president since we’ve been adults has released his tax returns.” Her friend Kate McMullan, 70, chimed in: “Even Nixon.”

Retired woodworker Ellin Rothstein, 72, said the scene looked familiar. “I demonstrated in the ’60s. I didn’t do anything until this Cheeto got into the White House,” she says. But she noticed fewer younger faces than she had at the Women’s March. “Most of the people here have paid taxes for 30 or 40 years.” She added that the injustice might not resonate so much with younger people who are just beginning to file their own tax forms. “We’re longtime taxpayers. Why break with tradition that’s been going on for decades? It’s so unfair.”

There was plenty of Tax March protest art, from paper “pussy-hats” made of tax returns, to a woman dressed in a tutu made of dollar bills, to another a sign that said “You can grab my pussy if you show me your taxes.” But marchers also showed more conventional displays of patriotism, like waving flags or wearing red-white-and-blue outfits. Many said they wanted to show that Trump’s taxes are a bipartisan issue that all Americans should care about.

James Riti, 49, carried a massive American flag that he waved enthusiastically throughout the March. “A lot of these protests let the Republicans have the patriotic slant, but this is an issue for all Americans,” he said. “Everybody makes it about right vs. left, but it’s about right vs. wrong.”

“Dissent is patriotism,” said Magdalena Schmidt, a 47-year old registered nurse who marched holding a big American flag. “It’s not just the Tea Party jackoffs who get to be patriotic.” Her husband Roderic Schmidt, who helped her carry the flag, agreed. “The right does not have a monopoly on patriotism. I’m tired of that story.”

While some estimate that more than 300,000 people attended the 2009 Tea Party protests, many of those people attended the hundreds of small local rallies of just a few thousand people. The largest Tea Party rally was in Atlanta, where 15,000 people reportedly showed up. Organizers and experts are still counting up the total number of people who attended Saturday’s Tax March, but already organizers say that 25,000 people marched in Washington D.C. and 45,000 marched in New York.

But for Trump supporters who encountered the Tax March protesters, the demands fell on deaf ears. “He’s paid his taxes — if not, he’d be in jail,” said a Trump supporter named Mike who preferred not to give his last name. “He’s just playing games, he’s busting their balls.”

“These people having nothing better to do,” he added. “They’re crying about this, and then next week they’ll be crying about something else.”

On this, Mike has a point: next week is the March for Science on April 22, which will feature thousands of scientists marching to protect research funding, and the week after that is the People’s Climate March on April 29, to protest Trump’s climate change policies. 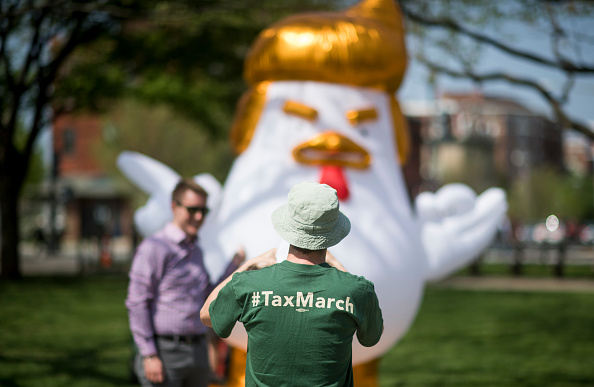 The Tax March Is Different From Other Trump Protests
Next Up: Editor's Pick