10 Years After Virginia Tech, It’s Easier Than Ever to Buy a Gun

Virginia State Police stand guard outside Norris Hall one day after a mass shooting on the campus of Virginia Tech, April 17, 2007 in Blacksburg.
Chip Somodevilla—Getty Images
By Josh Sanburn

Ten years have passed since a Virginia Tech senior opened fire on campus, killing 32 students and professors before turning the gun on himself. At the time, it was the single deadliest shooting in U.S. history, and the toll shocked the country, eliciting an outpouring of grief, anger and prayers.

The massacre also set off a political battle over an issue that has now become a familiar coda to mass shootings: gun control. In Virginia’s Republican-controlled legislature, the shooting energized both sides of the gun debate, pitting those who believed guns were the problem against those who believed they were the solution. A decade after what is still the deadliest shooting on a college campus, the winner of that battle is clear: It’s easier than ever to buy and carry a firearm in the state.

In the past 10 years, Virginia has reversed many of its gun regulations, making it easier for residents to carry concealed guns in bars, getting rid of the state’s one-handgun-per-month purchasing law, and making it legal to keep guns in car glove boxes. Over the same period, the state has shrugged off pushes for expanded background checks and calls to toughen laws to prevent gun trafficking.

Will Pelfrey, a Virginia Commonwealth University criminologist, says following the Virginia Tech shooting, gun rights groups were much better funded and organized and able to succinctly communicate their message.

“Gun rights advocates have done a clever job of connecting any individual gun restriction to a much broader theme of, ‘They’re taking our guns away and repealing the Second Amendment,’” Pelfrey says.

Virginia is not alone. The same pattern has played out in other states across the country following mass shootings, with lawmakers voting to ease gun restrictions rather than toughen them, a recent study from the Harvard Business School found. That’s in part because a majority of states are controlled by Republican governors and statehouses. One of the few states to pass stricter gun laws was Democrat-controlled Connecticut following the Sandy Hook elementary school shooting that left 26 students and teachers dead.

In Virginia, one of the few victories for gun control advocates was a bill designed to ensure that mentally unstable people are not allowed to buy a gun. Seung-Hui Cho, the Virginia Tech shooter, had been deemed a danger to himself by a judge in 2005 but still cleared background checks two years later when he purchased the two semiautomatic pistols he used to attack his fellow students. State agencies now must share information regarding people who are required to undergo mental health treatment with state and federal gun databases.

But the other proposals to tighten gun access in the state went nowhere — partly because the measures, including those related to expanded background checks — would not have stopped Cho from getting the firearms he used in the massacre.

“The background check system doesn’t do much of anything,” says Philip Van Cleave, president of the Virginia Citizens Defense League, a pro-gun rights organization. “[Cho] went through one and while he was waiting he plotted and planned what he was going to do.”

One of the most vocal advocates for gun regulation in Virginia is Andy Goddard, the legislative director of the Virginia Center for Public Safety and the father of Colin Goddard, who was wounded in the shooting. Goddard says he’s seen some progress simply because the subject of gun restrictions isn’t going away, and he cites polls showing a majority of Americans wanting laws that mandate universal background checks that he believes could help prevent future shootings.

“The only group that is standing in the way is a tiny number of very noisy extremists,” he says, referring to expanded background check legislation. Goddard’s group also helped stop a bill that would have made college campuses like Virginia Tech no longer gun-free zones.

Pelfrey, however, sees a legislative impasse on guns in Virginia generally and believes it will take something unseen in the state to truly shift the debate. 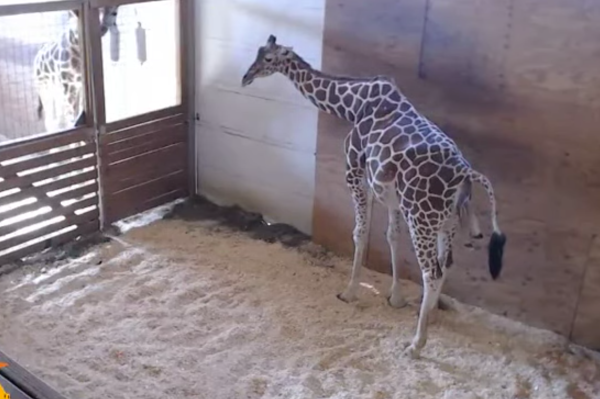 April the Giraffe Gave Birth to a Boy Calf
Next Up: Editor's Pick