Experts Say It's Unlikely U.S. Will Launch a Strike on North Korea

President Donald Trump drifted into dangerous waters last week when he dispatched a strike fleet near the Korean peninsula, stoking fears that the U.S. could carry out an attack on North Korea’s nuclear facilities, a move that would not be welcome in the region. Northeast Asia now hangs on tenterhooks as the war of words between Washington and Pyongyang threatens to escalate into a very real conflict — one that would be disastrous but, experts say, unlikely.

On Saturday, North Korea will celebrate one of its most important national holidays, the 105th anniversary of the birth of its founding father Kim Il Sung, prompting all manner of speculation about how its erratic leader might mark the occasion. More than 130 foreign journalists are now in Pyongyang on a rare invitation to visit the hermetic state, where they for the most part have reported that all is quiet in the capital.

Anxiety abroad is high, however, as North Korea is expected to soon carry out its sixth nuclear test, progressing toward its stated aim of developing a nuclear-armed intercontinental missile that could reach U.S. soil. President Trump, as well as his counterpart Xi Jinping in China, has warned Pyongyang against further testing, but those calls may well be ignored. “It’s not a matter of if, it’s when,” a White House advisor told Agence France-Presse, adding that the U.S. is assessing possible “military options” to counter North Korea’s weapons program.

Officials in Beijing and Seoul have sought to temper the concern. South Korean Foreign Minister Yun Byung-se told lawmakers this week that he was confident the U.S. would consult regional allies before acting against Pyongyang, while Chinese Foreign Minister Wang Yi urged a return to diplomacy, telling reporters that “military force cannot resolve the issue.”

Read More: Why President Trump Could Never Go It Alone on North Korea

Over the past week, Trump has made clear that he is not reluctant to authorize military force, even without congressional approval, making his Asian allies more than a little nervous. As Vice President Mike Pence prepares to visit Seoul on Sunday as part of his first official trip to Asia, reports that the U.S. was ready to “launch a preemptive strike” in response to the threat of a nuclear test confused even experts, who say such an act would be not only irresponsible, but also unlawful.

What is a ‘preemptive strike’?

A preemptive strike seeks to stop a known and immediate threat, hence it would be one in which the U.S. acted on intelligence of a North Korean plan to attack another sovereign nation. Experts say at present, there is no sign of such a threat. According to Daniel Pinkston, a lecturer at Seoul’s Troy University, “an unprovoked attack against U.S. allies would trigger the very thing that North Korea wants to avoid more than anything.” He tells TIME that “North Korea knows that if they go into a full scale war, they lose.” The conversation isn’t really about a “preemptive” strike, rather it currently hinges on two questions: will Pyongyang carry out another test in defiance of international conventions and the warnings of other nations; and how might the U.S. respond to such a challenge?

A nuclear test is just that — a test — not an imminent security threat to the U.S. or its allies, says John Delury, an associate professor at Seoul’s Yonsei University. He adds that a serious military response would not be proportional and would not be chosen by any “responsible American President.” Responding to a test with a strike, which would likely target North Korea’s nuclear testing facilities and achieve very little, would be construed as an act of war.

How would Pyongyang respond to a US strike?

No one knows exactly what would play out if the U.S. launched an attack on North Korea. Most experts agree, however, that the outcome would be very deadly. While a strike on North Korea’s testing facilities would likely result in very few casualties, Pyongyang would be compelled to launch a “very serious military response,” Delury says. “North Korea would retaliate in a way that would probably inflict serious loss of life,” he tells TIME.

His colleagues agree. “They would have a number of options,” Sean O’Malley, a professor of international relations at Busan’s Dongseo University, tells TIME. “One would be an artillery barrage sent toward Seoul.” He and other experts say the South Korean capital, home to more than 10 million people, would be the most likely target for a retaliatory strike, while U.S. military installations in South Korea could also be high on Pyongyang’s list. An estimated 28,000 U.S. troops are stationed in a number of military bases in the South, many at the southern Busan air base.

South Korea, located only about 120 miles south of Pyongyang, is also host to an estimated 150,000 to 200,000 American expatriates, who would most likely have to be evacuated in the event of conflict. “My natural instinct,” O’Mally tells TIME, “if Trump stays with long-held policy, is that he won’t strike without notifying South Korea and Beijing.”

What do Korea’s neighbors think?

In short, they are very worried. Seoul and Beijing have spoken in no uncertain terms against any military escalation, favoring a return to diplomacy, which Pyongyang has signaled it is open to — albeit under conditions deemed unacceptable by Washington. Japan, also host to U.S. troops, is feeling the pressure as well. CNN reports that Japanese Prime Minister Shinzo Abe on Friday told lawmakers that “the security situation around our country is getting increasingly severe,” warning (without providing evidence) that he believes Pyongyang is now capable of delivering warheads loaded with the nerve agent sarin, a chemical weapon.

Trump has promised a presidency that delivers decisive results. But amid the fear and speculation, North Korea’s nervous neighbors want words over actions. Those that lie directly in the line of North Korean missiles would prefer that the U.S. military stand down and the State Department step up. “What’s gotten completely lost in our discussion is, why isn’t the U.S. looking for diplomatic ways out of this?” asks Delury, of Yonsei University. “The State Department’s job is to travel around, to go there and to talk — including to people we don’t really like.” 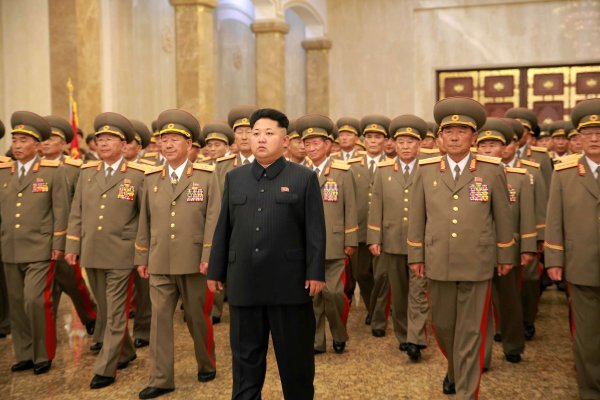 China Warns on North Korea
Next Up: Editor's Pick